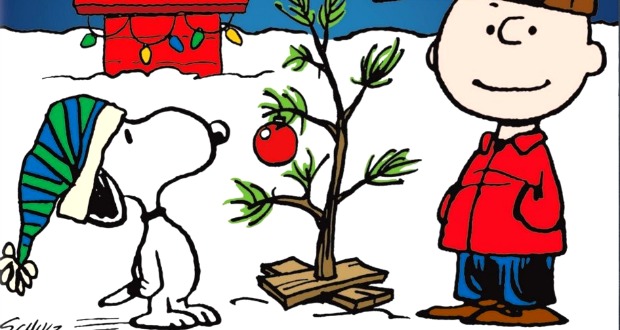 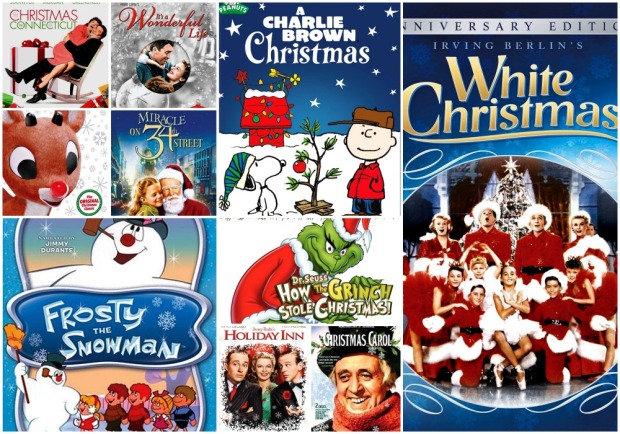 Oh the weather outside is frightful, but we love it, right?! Ok, maybe I’m the only one on the planet who loves snow and stormy weather, but whether you do or not, it makes snuggling in and watching a favorite holiday movie that much more fun.

From Charlie Brown to Bing Crosby to Ebenezer Scrooge, here are ten classic holiday movies the whole family can enjoy together.

1. A Charlie Brown Christmas (1965). Christmas just isn’t Christmas until you’ve heard Linus recite the true meaning of the season and watched Snoopy decorate his doghouse. The classic cartoon about the Peanuts gang and a forlorn little fir tree gets more relevant every year. Buy on Amazon | Watch on Amazon

FUN FACT: Kathy Steinberg, who did the voice of Sally Brown, had not yet learned to read at the time of production, so she had to be fed her lines, often a word or syllable at a time. That explains the rather choppy delivery of the line “All I want is what I have coming to me. All I want is my fair share.”

2. Frosty the Snowman (1969). A discarded silk top hat magically brings a snowman to life, then becomes the focus of a struggle between good and evil! Ok, more like a greedy magician and a group of schoolchildren. Sure, we know how it ends, but it’s still fun to watch year after year. Buy on Amazon| Watch on Amazon

3. Miracle on 34th Street (1947). Does Santa Claus really exist? Only he knows for sure, but this movie makes a pretty good case for the whiskered one. Maureen O’Hara, Edmund Gwenn, John Payne, and scene-stealer Natalie Wood bring this magical story to life. Buy on Amazon | Watch on Amazon

FUN FACT: There are 21 mail bags carried into the courtroom at the end of Kris’s hearing.

4. It’s a Wonderful Life (1946). Think the world would get along just fine without you? Think again! Jimmy Stewart plays George Bailey, a compassionate young man who learns that life in his small town would have been far different had he never been born. Buy on Amazon | Watch on Amazon

FUN FACT: The scene on the bridge where Clarence saves George was filmed on a back lot on a day where the temperature hit 90 degrees. This is why James Stewart is visibly sweating in a few scenes.

5. White Christmas (1954). Gee, I wish I was back in the Army! Ok, maybe not, but this fine musical starring Bing Crosby, Danny Kaye, Rosemary Clooney and Vera-Ellen has great tunes and a feel-good ending. Buy on Amazon | Watch on Amazon

FUN FACT: The “Sisters” comedy act that Bing Crosby and Danny Kaye perform was not originally in the script. They were clowning around on the set and the director thought it was so funny that it was written in.

6. How the Grinch Stole Christmas (1966). Who knew that Boris Karloff narrating a little tale for 26 minutes could have such an impact on our lives? Yet here it is, a perennial favorite with Cindy Lou Who, a little dog-turned-reindeer, and all the people of Whoville. Even though “you’re a mean one, Mr. Grinch,” we love you anyway. Buy on Amazon | Watch on Amazon

FUN FACT: The lyrics to the song “Fahoo Foraze” were made to imitate classical Latin. After the special aired, the studio received letters asking for a translation from people who believed them to be real Latin.

7. Christmas in Connecticut (1945). Barbara Stanwyck and Dennis Morgan star in this simple, old-fashioned story about a female journalist who pretends to be a hard-working farm wife and mother – and fails miserably on all counts. No matter. It still has the requisite happy ending. Buy on Amazon | Watch on Amazon

FUN FACT: The character of Elizabeth Lane was loosely based on the popular Family Circle Magazine columnist Gladys Taber, who lived on Stillmeadow Farm in Connecticut.

8. Rudolph, the Red-Nosed Reindeer (1964). Nobody tells – or rather sings – a story quite like the gentle Burl Ives. An elf who wants to be a dentist, an abominable snowman, a prospector named Yukon Cornelius, and an island of misfit toys all add up to the best reindeer games we’ve ever seen. Buy on Amazon | Watch on Amazon

FUN FACT: Yukon Cornelius’ stalwart sled dogs include a cocker spaniel, a poodle, a Saint Bernard, a collie, and a dachshund.

9. Holiday Inn (1942). Fed up after being dumped by his dance partner, Jim Hardy (Bing Crosby) opts for a low-key life in the country. But when Linda Mason (Marjorie Reynolds) enters the picture, he’s thrown into a love triangle with dancer Ted Hanover (Fred Astaire). Buy on Amazon | Watch on Amazon

FUN FACT: For the “drunk” dance (one of the best dances in cinematic history), Fred Astaire had two drinks of bourbon before the first take and one before each succeeding take. The seventh and last take was used in the film (so he was quite inebriated by then!).

10. A Christmas Carol (1951). There are 33 (and counting) versions of this tale, but the 1951 version starring Alastair Sim gets my vote as the best. It’s got everything — plum pudding, roaring fires, snow-blanketed streets, and carolers in the holiday spirit. We all know the story of the bitter curmudgeon who’s visited by three ghosts on Christmas Eve, but it gets better with each passing year. Buy on Amazon

FUN FACT: Glynn Dearman, who played Tiny Tim, grew up to become a radio drama producer. In 1990, he produced ‘A Christmas Carol’ for the BBC.