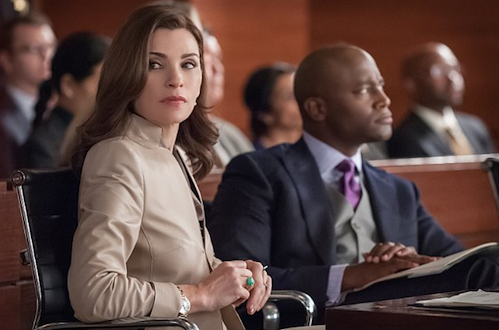 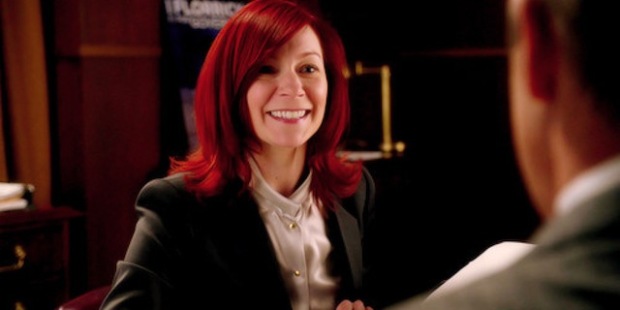 It’s a rather frustrating night on “The Good Wife,” but even a middling episode here is better than a good episode of some other shows on TV. Still, I have trouble believing a fair amount of what happens on this week’s episode.

While Diane is working at the decrepit Florrick-Agos-Lockhart offices, she receives an email supposedly from Alicia. It’s an empty message, except for an attachment. Diane opens the attachment (why??), and the screen goes black, until a bright yellow and black text box with a red button, that’s clearly for our (the viewers’) benefit, tells Diane that her files have been encrypted and she needs to click the red button to get them back.

While it’s exciting to yell “Don’t do it!” at the screen as we watch Diane hovering over the “accept here” button, I find it difficult to believe that Diane is truly that naïve. I assume there are still people in the world who are fooled by Internet scams and emailed malware, otherwise it wouldn’t be an issue anymore, but this one was so clearly fake looking (probably because it was made extra large for our benefit). I’d also think from years of being in an office environment that she’d know never to click on something or open an attachment she’s not expecting. I’m also sad that it’s Diane’s mistake, because it plays into the stereotype that older people can’t figure out technology.

Since Diane did click the button, the firm suddenly finds themselves in a race against the clock. Their entire network, meaning all their computers and laptops, is completely shut down and will remain so unless they send $50,000 ransom. They decide to pay the money in exchange for the decryption key (is the entire season going to be about the fledgling firm’s cashflow problems?), but Diane accidentally gives them her old Lockhart/Gardner email address, so she can’t get the code and needs to ask David Lee for help. Another technology mistake. I guess the writers needed some way to get LG back in the picture, and they’ll prove to be helpful later because Diane still owns the lease to the LG building. Convenient, especially when Diane finds a cockroach in her office.

They discover a toll-free phone number on the encryption message and call it, eventually talking to the ransomware’s help desk about their “order.” I’m assuming there must be a malware like this out there in the real world because this show is so good at ripping stories from the headlines, but it also seems ridiculous. Isn’t ransom illegal? How can there be a big help desk for an illegal operation? It’s so obviously shady that there must be something they can do. Can’t they get the police involved in some way?

Kalinda does that by going back to one of her sometimes-night-stands. Despite the nooner she and Cary try to have when the network is hacked, Kalinda goes to visit her FBI-agent “friend” Lana (Jill Flint) for help. And a little more nooky.

As much as I like Kalinda, I don’t understand the draw. Does she have a magic vagina or something? These women tend to fall for her so quickly and do anything she asks of them, even when they know she’s just using them. I really don’t care for her relationship with Cary either. It feels extra, tacked on, and I’m not sure where it came from. Yes, they’ve been on and off for most of the show’s history, but I don’t really know how this latest “on” started again, especially since it started shortly after Kalinda had betrayed Cary during FA’s split from LG. What is the nature of their relationship? Does Cary think they’re monogamous? I gather yes, based on the possibly jealous look he gives her when Lana comes to see her at the FAL office. Kalinda is also playing the pronoun game when Cary calls her on the phone while she’s with Lana, clearly trying to hide who her friend is and the nature of their relationship. I think Cary may be in for a rude awakening, which could very well form their inevitable split (since Archie Panjabi is leaving the show after this season). Although I’d think if he knew anything at all about Kalinda it’s that she can’t entirely be trusted—the main reason I don’t buy their relationship in the first place.

Fortunately though, it’s Kalinda who saves the day with the ransomware. With the help of her friend, she learns where the money went and hacks into the computer of the person in Russia who’s running the scheme, proving that she can make serious trouble for him by putting anti-Putin propaganda on his computer. He restores the network at FAL, and fixes everything.

Kalinda also thinks Lana helped Alicia and Dean (yep, Taye Diggs is back) with the case du jour, and accuses her of sneaking into Kalinda’s files while they were intimate—simply because that’s something Kalinda does. Insulted that Kalinda thinks she is capable of such deception, Lana storms out. Ah well, guess Kalinda will have to go back to poor clueless Cary for her nooky fix.

The case du jour brings back our favorite wacky attorney Elsbeth Tascioni (the brilliant, Emmy-winning Carrie Preston), and the enigma that is Rayna Hecht (Jill Hennessy). The pair goes up against Alicia and Dean in a wrongful termination suit against the company J Serve, who is accused of firing their CEO because she’s a woman—and apparently “a bitch on wheels.” I know the writers are trying to say that women who are strong, assertive, and act “like a man,” are not bitches, but we really need to find another word to replace that derogatory term.

But the stuff they’re doing with Elsbeth is totally bizarre. She keeps seeing strange visions. Is she dyslexic, or physically ill? Is she hallucinating? Or just easily distracted? Is it ADHD? Is she supposed to be on medication? The stock-footage style images of clowns and ships with cartoonishly-tooting smoke stacks messes with her concentration and throws her off her game—and Alicia takes clear advantage of it. It’s a little sad that Alicia resorts to such tricks, but apparently it’s fair . . . or at least legal. I really don’t know what the writers are trying to do with Elsbeth—she used to be just eccentric and kooky, not mentally incapacitated—but it makes me a little sad.

Elsbeth fights back against Alicia’s distraction technique, until Department of Justice lawyer Josh Perotti (Kyle MacLachlan) appears in the courtroom, flirting with Elsbeth again in his overt, relentless way. She’s clearly still attracted to him too, but refuses to let it distract her from the case. But he announces that he has his own case against J Serve, who allegedly stole bucket loads of intellectual property, and the two firms can’t finish their civil suit until the criminal charges have been tried. Rayna and Elsbeth approach Alicia and Dean in the hopes that they can team up for this larger criminal case. Hopefully that means we’ll see more of Elsbeth, and learn what’s going on with her.

While both of these story lines are frustrating, the really exciting drama in this episode comes between Alicia and Peter in the former’s ongoing campaign for State’s Attorney. Finn agrees to say a few supportive words for her during her endorsement, but Peter refuses to endorse her at the same time, and tells her to disinvite Finn or he won’t appear at the scheduled press conference. What is up with that, Peter? Apparently he took Castro’s bait and believes that there’s something going on between Alicia and Finn. As Peter and Alicia get into a shouting match, he accuses her of sleeping with Finn. How dare he? She made it perfectly clear that their relationship is for appearances only, and he certainly did plenty of sleeping around while they were married—plus, there’s nothing going on (yet). She tells him he will support her because he needs her as much as she needs him. She knows that if he doesn’t endorse her, the press will immediately start asking him about the status of their marriage and not let him discuss the important issues.

While he’s late, and gives Alicia a scare, Peter does in fact show up at the press conference to endorse Alicia’s campaign. He steals the microphone, and the spotlight, for a few words, and puts Alicia in the same position she was in for that famous photograph of the dutiful, loyal (and rather dowdy) wife from the start of the show. But this time, he eventually steps aside and they swap places: he stands quietly at her side while she addresses the made-to-look-larger-than-it-is crowd.

So what do you think, good-wifers? How awesome is Alicia when she’s telling Peter what for? How soon will Alicia and Finn have a romantic moment and fulfill all the gossip about them? Or will the gossip cause a riff in any possibility of romance? What’s happening with Elsbeth, and will she be on the show enough for us to find out? What about Kalinda and Cary? How long will that mess continue before it blows up in their faces? Share your thoughts in the comments.