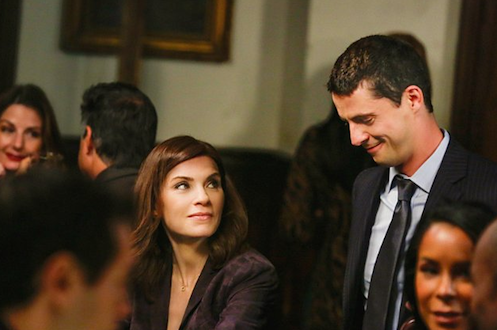 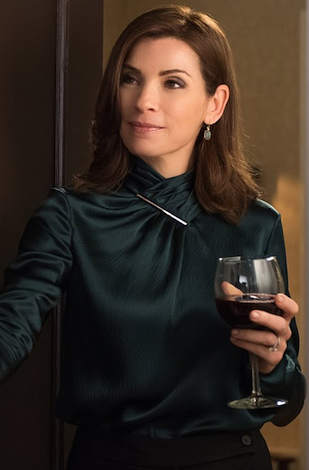 Oh boy, good-wifers. Alicia has taken the red pill. While it’s still not entirely clear why she wants to do it, it’s already looking like it’s too late to back out.

Yes, Eli equated Alicia’s decision to run for State’s Attorney with the Matrix’s red pill or blue pill: her taking the red pill means she jumps down the twisty turny rabbit hole that is running for a government position. And her troubles begin immediately. But that’s more fun for us, and gives many excellent examples of why Julianna Margulies won this year’s Emmy award.

After weeks of badgering, Eli (who desperately needs a haircut) has finally worn Alicia down, and yet he won’t even be her campaign manager. He’s too busy being Peter’s Chief of Staff, so he introduces Alicia to Johnny Elfman (Steven Pasquale). Seems Eli’s still up to his old tricks though, because Johnny isn’t any more interested in managing Alicia’s campaign than she is in hiring him. Of course, Alicia gets over her first date jitters of talking to Eli and meeting Johnny, and proves to the latter what the former already knows (and the dopey television show in the background reminds us): Alicia is a badass, and she can handle anything.

Good thing too, cause Alicia’s got quite a rough road ahead of her, and that’s before they even get out of her apartment. Eli and Johnny go through her oppo research—the skeletons in her closet—and it’s a lot more than Alicia had any idea about. That’s because they’re not just checking into her background, but her family’s background, and discovering lots of things that Alicia had no idea about.

Not to mention, the scene from last year where she helped Finn prepare for his questioning after Will’s murder, and someone snapped a picture of him leaving Alicia’s apartment early in the morning. How suspicious it looks! Are they having an affair? Apparently no one snapped a picture of him going in to her apartment that morning—or if they did, they’re keeping it to themselves.

Alicia addresses all of the indiscretionees in the hopes of clearing things up and making sure they won’t become problems for her campaign. Alicia and Mom settle the potential lawsuit with the child’s mother by showing her video footage of the child wreaking havoc in the store, including injuring an older woman, resulting in thousands of dollars in medical bills. Alicia plays phone tag with Zach but finally talks to him, and she’s less angry about the abortion than about his lying to her again. She tells him how he’s going to respond to the press about it, if it comes up.

Alicia also shares some flirty fun with Finn in a bar, a scene we’ve seen hinted at since before the season started, the one that had such promise of romance but is mostly making sure they’ll tell the same truth about his reason for being at her apartment so early in the morning. He asks her to stay for more drinks with him and take a cab home, but she kindly refuses. Is she not allowed to fraternize with him because he’s working with her SA nemesis Castro?

She leaves after one glass of wine, which is fortunate because she’s pulled over by a cop. Despite her volunteering to take a breathalyzer test, the cop insists that she do a roadside test while people drive by and take photos—which of course end up on the web the next morning. Clearly she’s being set up, and the cop is doing nothing but causing trouble for her. Hmm, could Finn have been asking Alicia to stay with him so the cops might not catch her? Does he know something about this? He does warn her that Castro is trying to hit her where she’s vulnerable. What more does he know?

Speaking of indiscretions, Peter is concerned about what Eli dug up on him in Alicia’s opposition research, but Eli cannot tell him that. Eli, on the other hand, is worried that Peter is having an affair with that troublesome intern Lauren Lytton—especially after learning from Alicia that Peter had slept with Kalinda years ago when she was working for Peter. Finally though, Peter allows Eli to fire Lauren, and find her a job in a senator’s office. We learn later, when it seems obvious that Peter is sneaking around with Lauren, that he has not been sleeping with her but didn’t want to fire her because her mother is a dear friend of his from long ago and is going through some tough times. The question is, does Eli believe that Peter isn’t sleeping with Lauren? Do we?

Eli and Johnny also tell Alicia that it would be wise for Florrick, Agos, and Lockhart to drop Lemond Bishop as a client. Considering how much trouble he has indirectly caused for Cary the last few weeks, it’s not the worst idea. So his drug dealing, money laundering, and murdering are not a problem for them, as long as Alicia’s not running for State’s Attorney? Good to know. However, they can’t tell him the whole truth about their wanting to drop him—but he gets it out of Kalinda later.

Amidst all the campaign talk, daughter Grace (Makenzie Vega) is holding surreal catholic school choir rehearsals in her bedroom, for some ridiculous reason. She also discovers a website belonging to a PAC that is raising funds for Alicia’s campaign. Alicia thinks it’s Eli’s doing, but he explains that he’s not allowed to do such a thing and that it’s clearly a result of her popularity. Turns out, it’s not just Random Q. Public starting the PAC, but Bishop. He reveals himself to Alicia, explaining that he did get another law firm and pretended to be very angry about FA&L letting him go, because it would look better for her campaign. He then revealed that he started the PAC, and probably contributed the $131,000 that racked up in about 48 hours. Oh boy, that’s not good.

It’s still not entirely clear why Alicia wants to run for State’s Attorney. How will she have the time? Does she really want to put herself, and her family, through all this garbage? If she wins, she’ll have to quit the practice, yet they’ve only just started. In fact, FA&L is barely even off the ground; they’re still doing construction in the office for Pete’s sake. She also can’t seem to convince Johnny that she wants to do it for positive reasons and not just anti-Castro reasons. Not that those aren’t good reasons, but Johnny wants to believe that she’s really invested in it for her own sake. But if she’s also going to be beholden to Lemond Bishop for it, that’s not a good thing either, and seems to me is part of why she’s going up against Castro. This is clearly going to get worse before it gets better.

So what about you, good-wifers? Why do you think Alicia wants to run for State’s Attorney, or is she just tired of everyone assuming that she is? Do you believe that Peter is not sleeping with the intern? Do you think Finn knew something about Alicia’s run-in with the police? Are you excited for Elsbeth Tascioni’s return next week? Posit your theories below.