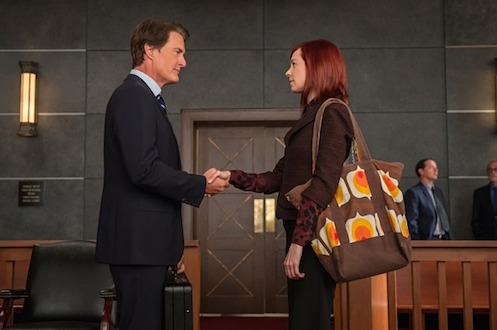 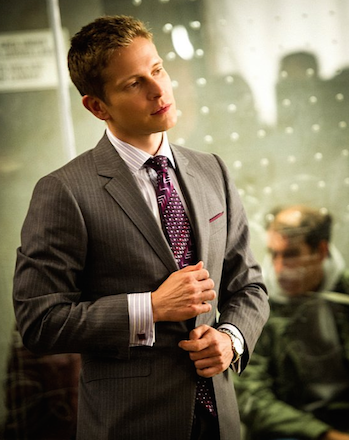 Well good-wifers, things may be moving slowing (or not at all) between Alicia and Finn, but this week we get at least a little quirky romance in the story between Elsbeth Tascioni and AUSA Josh Perotti.

This week’s “The Good Wife” picks up where last week’s left off—with a “previously on” and everything, something they almost never do: Creators Robert and Michelle King called episode recaps “the boil on the butt of the Golden Age of TV.”

If you recall last week, Alicia went up against Elsbeth Tascioni (Carrie Preston) in a wrongful termination lawsuit for the former CEO of J Serve tech company, until Department of Justice attorney Josh Perotti (Kyle MacLachlan) announced an intellectual property case against the company. His criminal case needs to be tried before the civil suit can continue, so Elsbeth and Alicia decide to join forces against him.

Elsbeth is doing her best, but her mutual attraction to the relentless Perotti is distracting her. The two of them are so adorable together, with their behind-the-times musical tastes, their Old Spice and baby lotion fragrances, and their bizarre quirks and in- and out-of-court games. Perotti eventually reveals that it’s not an intellectual properties case he’s interested in, and he instead charges J Serve with economic espionage for selling encryption defense software to a company with ties to the Chinese government.

Elsbeth and Perotti go to battle, trying to ignore their passion for each other as they take each other down. They eventually share smoochies on her office desk, sending shirt buttons flying everywhere. The next day, when she brings him proof of a CIA-fronted company doing the same thing J Serve had done, he illegally destroys her evidence, but she records him doing it, so she can prove that he is selectively prosecuting them. Knowing Elsbeth has him beat, Perotti drops all charges and heads back to Washington D.C. Aw, so much for their tryst.

Alicia, meanwhile, tries to decide what she’s going to say in her apparently necessary interview with Pastor Jeremiah about her religion. She had stated two years ago that she’s an atheist, but her campaign manager Johnny Elfman (Steven Pasquale) explains that she can’t say that if she wants to win the State’s Attorney race. After consulting with her literally-resident religion guru—her daughter Grace—Alicia explains to the pastor that she can’t stand when people don’t listen, and that she is open to hearing people express their love of God.

On her return home, Alicia tells Eli’s daughter Marissa (Sarah Steele), who’s serving as Alicia’s bodywoman, that she doesn’t like pretending to be someone she isn’t. Marissa replies that Alicia’s very good at doing that. That’s pretty sad, especially for someone running for an elected office, yet I know it’s common. Grace, on the other hand, is the celebration of her bible study group, who congratulate her on finally getting through to her heathen mother. Barf.

Cary and Diane are also having their own troubles. Cary attends a Harvard mixer in a bar ten minutes from his house, but it happens to be half a mile over the state border into Indiana, which means that he’s broken the rules of his probation. Linda Lavin returns as Cary’s service officer Joy Grubick, who surprises Cary at his apartment when he turns up inebriated and in the arms of a woman he met that night (I guess I was wrong when I thought Cary thought he and Kalinda were monogamous). Joy arrests Cary again for breaking these rules, and Diane tries to support him in court, but he ends up facing a much stricter set of rules: he now has to wear an ankle monitoring bracelet, and adhere to a strict 9 p.m. curfew. He also is no longer allowed to associate with Kalinda, because she is considered “dangerous.” Apparently the couple’s impending breakup is starting already.

Diane tries to get the Lockhart Gardner offices back from Louis Canning, whose health issues have worsened, and David Lee. The men first try to charge her money for OSHA penalties that the LG offices are facing, but Kalinda discovers that Louis’s other properties are facing the same penalties. He agrees to drop all of those charges, but then points out that Diane broke another rule stipulated in the lease, because she hasn’t been on the LG premises for much of the last four months. Kalinda discovers that Diane could have had a proxy at LG for her, so the two women coax Howard Lyman into joining Florrick-Agos-Lockhart so that he can serve as her proxy. He agrees, and Diane finally wins back the offices (though we’ll have to see how much trouble Lyman causes for FAL in the future). LG leaves the place a complete wreck, including removing the F, A, and L keys from the keyboards, but it’s ok. Things are starting to feel back to normal, as Diane gets her old office back and Alicia, sadly and surprisingly, takes Will’s office.

I nearly started crying all over again when Alicia took Will’s office and sat in his chair. How bizarre it is, and heart wrenching. I’d think she’d need to seriously exorcise that room before it feels comfortable to her, but perhaps we can get some Willicia flashbacks. Alicia has changed so much since the start of the show, and especially over the last year. As she tells Pastor Jeremiah, she had no idea then that she’d end up here now. But no one ever really knows, do they.

So what do you think, good-wifers? Will Cary be able to stick to his increased restrictions and stay away from Kalinda? Will Alicia, Diane, and Cary be happy back at their original workplace, and is that it for Canning and Lee? Will we see Elsbeth again next week for the continuing J Serve wrongful termination suit? And will she be sad that Josh Perotti had to return to DC? Tune in to the comments and let me know.