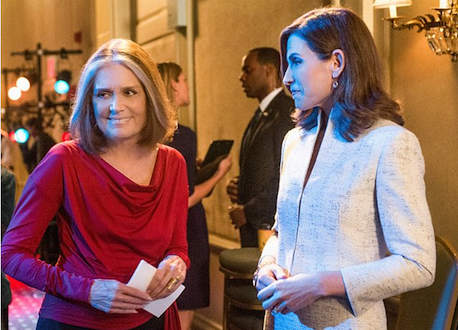 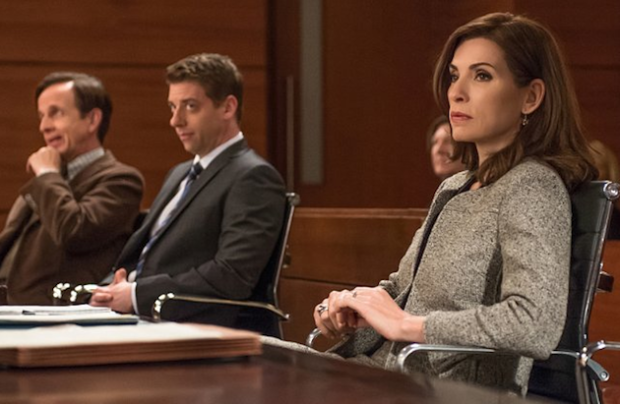 Wowie zowie, good-wifers! Quite an exciting new episode of “The Good Wife” this week. Cary’s free on bail but seems in danger of going right back to jail, the lawyers have to find a new, spiritual approach to the case du jour, and everyone refuses to believe Alicia when she says she’s not running for State’s Attorney. But the big question looming over the episode: How do you say no to Gloria Steinem?

That’s right. Gloria Flipping Steinem guest stars as herself. Alicia still refuses to run for State’s Attorney, despite Eli’s tricks; despite Castro trying to hurt her non-existent campaign; despite all the talk on television and online news; despite everyone’s cajoling and assuming and asking and encouraging. When Alicia bumps into Steinem at a fundraising event, the feminist icon imparts to Alicia that it’s practically her duty to run. Alicia then begins to consider it—and has some entertaining daydreams of grandeur about her interaction with Steinem—but it’s not until Castro intones threateningly that Alicia wants to win against him for retribution, “because your lover was gunned down in one of my courts.”

Whoa. He is completely clueless, a) because he couldn’t be more wrong, and b) because he clearly has no idea just how hurtful and repugnant that is. While I’m glad someone on the show remembers Will’s death, that is also pretty dirty. I know we’re supposed to hate Castro, but it’s working.

Despite Castro’s protests, I’m starting to question if he actually wants Alicia to run, because everything he says convinces her more that she needs to take him down. Eli’s slippery wheels are still turning too: he nonchalantly asks Alicia to confirm that she isn’t running, being sure to tell her that Peter will probably back Castro if she doesn’t run. He explains that Peter needs to endorse someone who will win, and that person is likely to be Castro—even though he’s a bad man. He tries to insure her that “not everything is about you,” but in this case we know it is. By episode’s end, Alicia asks Eli what the plan will be if she does run.

Meanwhile, Cary, Alicia, and Diane all take turns meeting with—and telling little white
lies to—Cary’s service officer Joy Grubick, played skillfully by Linda Lavin. Grubick is the master of peripheral vision, rarely looking her guests in the eye, and seeming very down-to-business and self-assured while conducting interviews, asking questions about Cary’s character, work life, and post-work activities. Dream-like flashbacks tell us the truth, intercut with the answers given. The lawyers don’t want to say anything that will hurt Cary’s case—especially when they learn that Castro and Finn Polmar’s CI has suddenly gone missing.

Yes, Cary has also been back to sexy-times with Kalinda (pressed up against a giant picture window, by the way), who said that she thinks the problem with the informant “will take care of itself.” Or did she take care of it? That becomes the question, as Finn fights for revocation of bail because he thinks Cary (or Kalinda) intimidated the CI, causing him to flee. He goes a few rounds against Diane for this, but neither side has enough of a case to prove anything. They then turn to Ms. Grubick’s testimony. Despite Cary’s assumption that Grubick will give him a terrible review, she nervously tells the court that she thinks Cary is afraid of going back to jail and is fighting to keep his business. What happened to the confident, self-assured woman who conducted the interviews? Was Grubick’s nervousness on the stand an act, or is she actually intimidated by courtrooms or juries? I wonder if this will be addressed more in future episodes. I hope so; Lavin is wonderful fun.

In between these scenes, Alicia, Cary, and new partner Dean Levine-Wilkins try a patent infringement case against wonderful Christian Borle’s Carter Schmidt, about a $400 million (!) genetically modified seed. The farmers on either side of the suit grow tired of all the yelling and fighting the lawyers do on their behalf. They’re friends and neighbors after all, and would prefer to settle things in a more amicable, and quiet, way. They bring the case to Binding Christian Arbitration instead, moderated by Robert Sean Leonard’s Dell Paul. The lawyers have to find new tactics—and brush up on their bible study—as they obliterate the separation of church and state and try the case in Christian Court.

As frustrating as it is, it’s interesting to see how the lawyers adapt to a situation where opinion becomes fact and biblical law takes precedence over judicial law. Schmidt tries buttering up Paul, Alicia asks her daughter Grace for assistance (I don’t know where she’s been recently, but she looks beautiful), and we learn that Dean almost became a priest, but changed his mind because of “To Kill a Mockingbird.” Despite the truth, that the defending farmer did in fact steal the genetically modified seeds, essentially because his neighbor was monopolizing the market and putting him in financial trouble, the pair decides to settle the case on their own. So much for a paycheck for Florrick, Agos & Lockhart.

So what do you think, good-wifers? Do you hate Castro as much as I do? Will Alicia finally give in and officially announce her candidacy for State’s Attorney? Could Eli be any more entertaining? Chime in below.