New on the big screen for kids and teens in November is a very big hero, a Mockingjay, some crazy penguins and lots more. Here’s a sneak peek at what’s new in theaters and on DVD and Blu-ray this month. Note that release dates are subject to change. 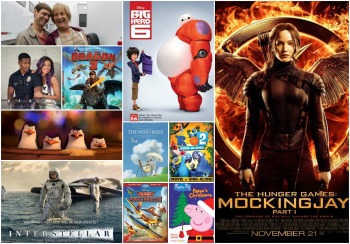 From Walt Disney Animation Studios and the team behind “Frozen” and “Wreck-It Ralph” comes this action-packed comedy-adventure about the special bond between Baymax (voiced by Scott Adsit), a plus-sized inflatable robot, and prodigy Hiro Hamada (Ryan Potter).

Directed by Don Hall and Chris Williams, this movie is one of the best family flicks of 2014.

With our time on Earth coming to an end, a team of explorers undertakes the most important mission in human history: traveling through a wormhole beyond this galaxy to discover whether mankind has a future among the stars.

Drawn to each other, Noni and Kaz fall in love, despite the protests of others who urge them to put their career ambitions ahead of romance. But ultimately, Kaz’s love gives Noni the courage to find her own voice and follow her own dreams.

Yes, it’s been 20 years since that first movie. Now the dimwits are on the road in search of one of their long lost children in the hope of gaining a new kidney.  Directed by Peter and Bobby Farrelly, this movie also stars Kathleen Turner, Laurie Holden, Rob Riggle and Paul Blackthorne.

The worldwide phenomenon of “The Hunger Games” continues to set the world on fire with “The Hunger Games: Mockingjay – Part 1,” which finds Katniss Everdeen (Jennifer Lawrence) in District 13 after shattering the games forever. Under the leadership of President Coin (Julianne Moore) and the advice of trusted friends, Katniss spreads her wings as she fights to save Peeta (Josh Hutcherson) and a nation moved by her courage.

Directed by Francis Lawrence from a screenplay by Danny Strong and Peter Craig, this movie is based on the third novel in a trilogy written by Suzanne Collins. I’ve read all the books and love these movies. Jennifer Lawrence is the perfect Katniss.

Skipper, Kowalski, Rico and Private must join forces with the chic spy organization, the North Wind, led by Agent Classified (I could tell you his name, but then … you know), voiced by Benedict Cumberbatch (yes!) to stop the villainous Dr. Octavius Brine (John Malkovich), from taking over the world.

World-famous air racer Dusty Crophopper (voiced by Dane Cook) joins forces with a dynamic crew of elite firefighting aircraft in a comedy adventure. Together, the fearless team battles a wildfire at Piston Peak National Park, and Dusty learns what it takes to become a true hero. Great animation, a compelling story and positive messages make this a winner for kids. Read my full review of “Planes: Fire & Rescue” here.

“Rio 2” is bright, fun and colorful, and also includes lots of snappy tunes! Now your little ones can sing along with their favorite characters in this cool sing-along version just in time for the holidays. “What is Love,” “I Will Survive,” “Rio Rio” and more are included. The story follows Blu, Jewel and their three kids as they fly from Rio de Janeiro to the Amazon rainforest in search of more birds like them.  Anne Hathaway, Jesse Eisenberg and George Lopez are among the voice cast. Blu-ray bonus features: “Rio 1” Refresher; Birds & Beats: The Singing Talents of Rio 2; and “I Will Survive” multi-language music video. Read my full review of “Rio 2” here.

This fun-filled holiday set includes 12 “peppasodes” of the Nick, Jr. series. Peppa and George write letters to Santa, decorate the Christmas tree, sing festive songs and stay awake all night waiting to catch a glimpse of the big guy himself. There’s also a trip to Pirate Island, a visit to the Dentist, a school bus adventure and much more! Little ones love this series, filled with lots of snorts, laughter and puddle-jumping.

HOW TO TRAIN YOUR DRAGON 2

Stunning visuals, great characters, epic music and a poignant story all combine to make this one of the best family movies of 2014. This sequel to the hit 2010 movie finds our beloved friends Hiccup and Toothless discovering an ice cave that’s home to hundreds of wild dragons and the mysterious Dragon Rider, who has a unique connection to Hiccup. Voices include Jay Baruchel, Kristen Wiig, America Ferrera, Cate Blanchett and Gerard Butler. Read my full review of “How To Train Your Dragon 2” here.

From Oscar-winning filmmaker Hayao Miyazaki (Best Animated Feature, “Spirited Away,” 2002) comes this lovely, spellbinding tale about Jiro, a man who dreams of flying and designing beautiful airplanes and whose character is inspired by the famous Italian aeronautical designer Caproni. Nearsighted and unable to be a pilot, he becomes one of the world’s most accomplished airplane designers, experiencing key historical events in an epic tale of love, perseverance and the challenges of living and making choices in a turbulent world. Now on blu-ray, this set features dazzling picture and sound, as well as some fascinating bonus features.