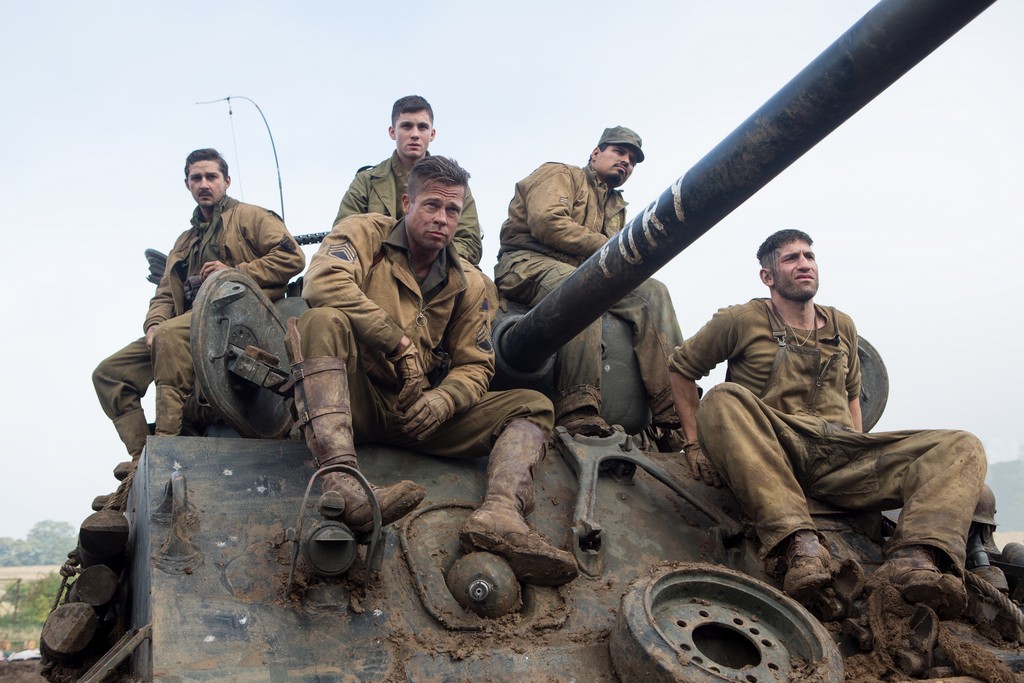 SYNOPSIS: As the Allies make their final push in the European Theatre in WWII, a battle-hardened army sergeant named Wardaddy (Brad Pitt) commands a Sherman tank and a five-man crew on a deadly mission behind enemy lines. 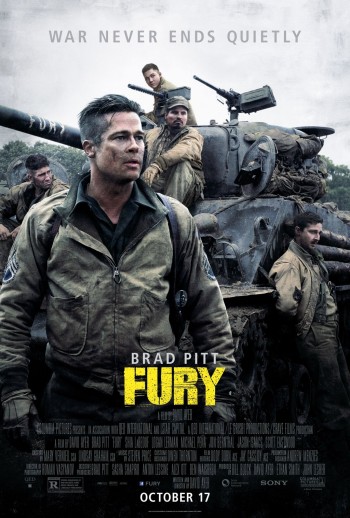 REVIEW: There are some war movies that sort of gloss over the whole “war is hell” theme. “Red Tails” springs to mind. A lovely film with some important notes about segregation, but not particularly realistic in the way of blood and gore. And I’m fine with that.

But “Fury” is the real deal, complete with blood, guts, emotional turmoil, death, mud and more death. It reminds me a lot of HBO’s “The Pacific.” I’m not generally a fan of this type of filmmaking – because I’m not a blood-and-guts kind of girl – but “Fury” is very well done. They did not sugarcoat anything.

It’s April, 1945 – the final days of World War II – and American tank crews are stationed deep within Germany. Commander “Wardaddy” (Brad Pitt) is commanding a Sherman tank and a five-man crew. When one of his team dies, a rookie typist who’s never seen the inside of a tank is ordered to join them. ” You can see Wardaddy thinking, “That’s just swell.”

The rest of the crew — Boyd “Bible” Swan (Shia LaBeouf), Trini “Gordo” Garcia (Michael Pena) and Grady “Coon-Ass” Travis (Jon Bernthal) – are none too keen about this new recruit, but after a series of attacks, they learn to respect each other. When their tank hits a land mine and becomes disabled in enemy territory, they’re put to the ultimate test.

The cinematography in “Fury” is both stunning and interesting. Director David Ayer, perhaps best known for similarly realistic films “Training Day” and “End of Watch,” color codes the bullets’ paths. So they look more like light sabers in “Star Wars,” but the result is that we know who’s shooting whom.

We get an up-close look at what life is like for the tough guys inside a tank’s cramped quarters — dirty, smelly, bloody and painful. But it makes you even more respectful of the people who serve their country in this way, and it’s an eye-opening look at this pivotal part of WWII’s history.

While “Fury” takes place during a massive war — it’s not called “World War” for nothing — Ayer thoughtfully tells the story through these few characters. And it’s not just about their life in a tank; an extended scene takes place in a home where Wardaddy politely asks the two women who live there to cook some eggs he’s brought with him, which they do while he cleans up in a wash basin. It’s a simple scene, but very telling about the intersection between war and humanity.

If you’re not into blood and gore and dead bodies, “Fury” might not be the movie for you. But if you are, it’s a gripping look at war and soldiers. As Wardaddy says at the beginning of the film, “Ideals are peaceful; history is violent.”

Sex/Nudity: A German girl and an American soldier go into a bedroom for consensual sex; they kiss, but nothing else is shown. Pictures of pin-up girls in provocative clothes are shown inside the tank and elsewhere. Wardaddy takes his shirt off and cleans up in a wash basin. Some verbal sexual innuendoes.

Violence/Gore: Realistic violence includes heavy shooting with both small guns and tank artillery. A character is killed with a knife. Soldiers’ heads are blown off and shown detached from the body. Piles of dead bodies are bulldozed into holes and run over with tanks. Blood is shown everywhere. A rookie soldier is ordered to clean blood from the inside of a tank, which includes half a man’s face lying in a puddle of blood. A woman is shown slicing up the carcass of a horse. Nazis use kids in battle and some are killed. German bodies are hung on posts along the side of the road with “coward” signs around their necks. A rookie soldier is ordered to shoot a German soldier.

Drugs/Alcohol: Characters smoke cigarettes and share a bottle of something that might be whiskey. The bodies of wealthy Germans are shown lying among open bottles. They’re said to have gotten “drunk as lords” and killed themselves.

Which Kids Will Like It? Kids 17 and older who like Brad Pitt movies or realistic movies about WWII.

Will Grownups Like It? If you can handle the blood and gore, “Fury” is a well-made film about tank life during WWII.