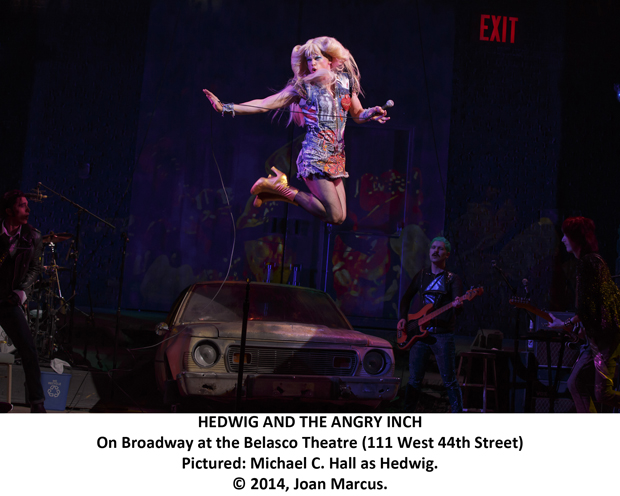 “Hedwig and the Angry Inch” is enjoying a run on Broadway that has included the Tony Awards for Best Revival of a Musical, Best Featured Actress in a Musical, and Best Actor in a Musical for the first Hedwig in this production, Neil Patrick Harris. Now, Michael C. Hall has taken on the role and is killing it in a way that would make Dexter proud – but no plastic, no bloodshed.

After Neil’s stint in the show, Andrew Rannells of “The Book of Mormon,” “Girls,” and “The New Normal” took the reins. I didn’t catch Andrew’s performance, so I can’t speak to that. But I saw both Neil and Michael. 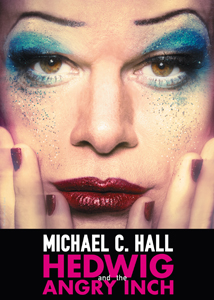 Neil was thin and lithe and almost like a sprite frolicking on the stage. Michael, while not tall, is stockier and more masculine, although he lost some weight and muscle for the role. You can still see defined biceps, but you won’t see quite the same amount of bulk that he sported when in “Dexter.” You can even see the loss of weight in his face.

Because of his particular masculinity, I wasn’t sure if Michael would be able to pull off the part, but I was more than pleasantly surprised. He inhabits “Hedwig” with remarkable femininity and vulnerability. At one point, he was dressed in a black slip and had his back to the audience. Even with his broad shoulders, I was dumbfounded by how much he was capable of looking female. 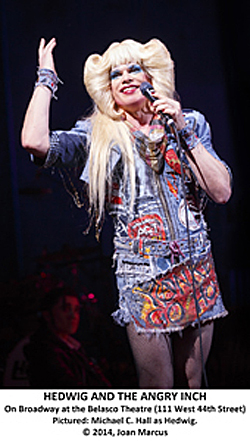 “Hedwig” is a tremendously demanding show. The character wears a dress, a heavy wig, and lots of makeup while climbing over sets and stepping on and off the top and hood of a car – all in high heels while carrying a microphone with a long cord. He also has to sing almost every song in the score, and they aren’t easy songs.

Michael shines in all respects. He has the feminine body language down, and his comic timing is perfect. Most impressive, though, is his singing voice, and it’s here where he outshines NPH. Don’t get me wrong – I loved Neil in the role and thought he sang it beautifully, but Michael has a true rock ‘n roll voice. I wish they would make a recording of him singing the score, but they probably won’t. Now, we just have to talk him into making a rock album!

I knew Michael could sing because he had previously been on Broadway in “Cabaret” and “Chicago,” but it’s the score of “Hedwig” that allows him to truly show off his rock star capabilities. He’s doing the show’s creators, John Cameron Mitchell and Stephen Trask, proud.

Michael will continue in “Hedwig” until January 4, 2015. If you’re in New York, don’t miss it. You’ll also get to see an incredible performance by Lena Hall, who won the Tony and could sing rings around almost anybody.

There isn’t an available video of Michael in the role, but here’s Neil as “Hedwig” at the Tony Awards.