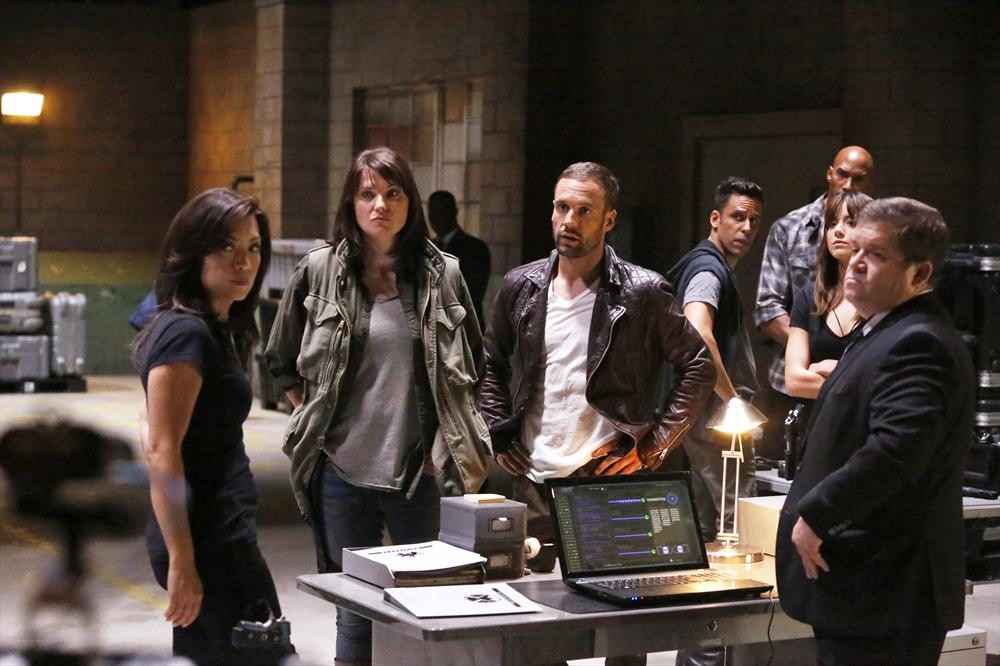 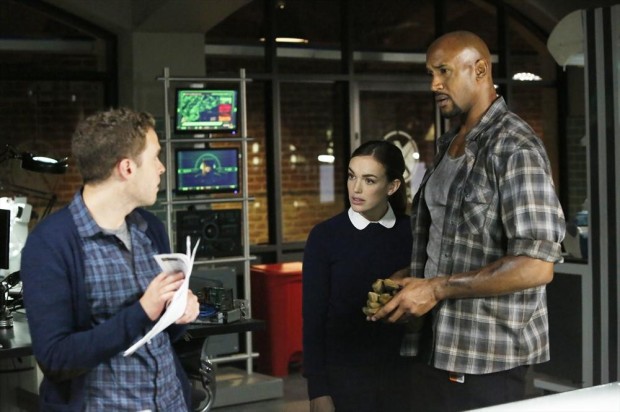 On last week’s “Marvel’s Agents of SHIELD,” a horrific single car crash with Creel left Hartley and Idaho dead and Hunter’s leg pinned. I called Idaho being a redshirt, but I sure wasn’t expecting Hartley to eat it so quickly. I thought, surely, we’d get to see Lucy Lawless in several more episodes. Maybe they’ll do some flashback scenes with her.

PHOTO GALLERY: “Marvel’s Agents of SHIELD” – “Heavy Is the Hand”

May comes to Hunter’s aid, but he tells her to shove off and go after Creel. She leaves him with a home version of a torch to cut through the metal pinning Hunter’s leg in. Is that available at Michael’s? I sure would like to have one of those. Of course, I can always jack up my creme brulee torch.

Fitz still isn’t 100%, but even with the cloaking device from the Quinjet that Triplett and Skye stole, he still can’t reverse engineer it. Mack, the SHIELD mechanic, works with Fitz on the cloaking device. He’s learning to speak Fitz and is able to decipher some of his truncated jargon.

Hunter is captured by Talbot’s men. Talbot offers him whatever he wants in return for Coulson. Hunter asks for $2 million and a proper burial for Hartley. So did Hunter and Hartley have a relationship outside of their working one? Did Hartley and Talbot maybe have a relationship also at some point in time?

Creel remains affected by the Obelisk. There’s a chunk of him that won’t seem to change back, no matter what material he touches. A waitress accidentally brushes him, and the effects of the Obelisk are transferred to her as she turns to stone.

Coulson thinks Hunter, being a mercenary, will turn on SHIELD and it seems like he does for a second, but in the end he seems to be trustworthy. Enough that Coulson offers him a position with SHIELD and another chance.

It looks like Creel’s powers only really staved off the effects of the Obelisk. Along with the device Fitz had already perfected, Creel is turned into stone, but is he dead? Or just absorbing the material the Obelisk is made of?

During his fight with Hunter, pretty sure he touched Hunter’s skin several times. How did this not kill Hunter?

Skye thinks there’s something wrong with Coulson and calls May out on it. She claims he’s fine, but then we see May berating Coulson. She knows about his “episodes” and records one as he voluntarily goes through another, carving into a cement wall with a knife. What’s he drawing and why does some of it match up with what’s on the Obelisk?

We see that Flowers can hold the Obelisk without the adverse effects that others have felt. Her new boss, The Doctor (Kyle MacLachlan) tells her he’ll show her what the Obelisk holds only after Flowers brings his daughter to him. Presumably, Skye is his daughter. So does this mean Skye is not 100% human? Hmm…

What are your theories? Sound off below.