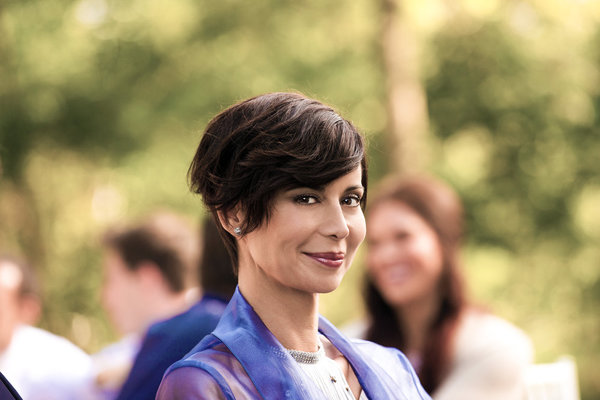 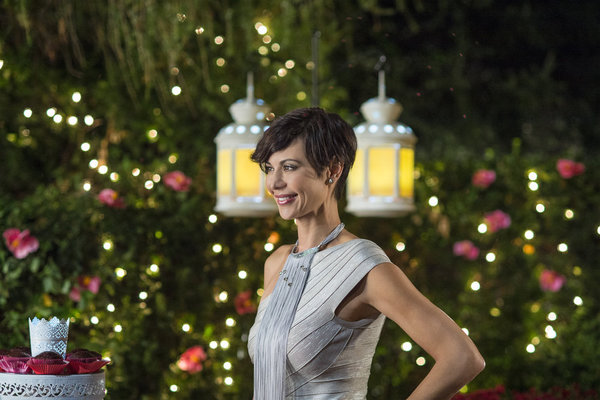 Catherine Bell (“JAG,” “Army Wives”) has been starring as “The Good Witch” in a series of movies for Hallmark with the latest one, the seventh installment, “The Good Witch’s Wonder,” premiering Saturday, October 25, 9/8c. If you want to catch up, Hallmark will be running a marathon of previous “Good Witch” movies starting at 11 a.m. on the same day.

I had a chance to chat with Bell recently about her role as the metaphysical enchantress.

When did you realize you wanted to be an actress, and who inspired you to be one?

I’m probably different from other actors. I was going to UCLA to be a doctor and engineer, and I wasn’t as into it as I’d thought I would be so I tried modeling. Then I used to be really shy, so I took an acting class at UCLA one summer, thinking it might help me overcome my shyness. I saw a poster for it somewhere and I thought, “Well, maybe that could be fun.” Scary, but I was willing to try it. I tried it and it was fun! It was challenging, but I felt better doing it. It sort of started that way, so it wasn’t really like a childhood dream or anything like that.

What actors do you look up to?

There are so many. Daniel Day-Lewis popped in my mind the minute you asked that. He’s so phenomenal.

I like Angelina Jolie – she’s just strong yet feminine… a beautiful woman.

Did you ever expect, when you agreed to do the first “Good Witch” movie, that it would spawn six other movies and now a series?

Oh my gosh, no. Never! Even when you do a series, you just never know if it’s going to get past the first episode! It’s been amazing! It was a great script and a really cute part, and somehow it all came together with writing, the cast and the stories and people really connected with it.

What can we expect from the series? Anything different from the movies?

Um, actually yeah, a little bit. Obviously, we want to keep with the theme and all the things people loved about the movies, but we’re kind of going forward in time a little bit. My daughter, who was a baby in the last movie and a toddler in the movie that’s about to air, she’s now played by Bailee Madison. She’s a great little actress – really, really good. We just have a lot of fun together. She actually looks like she could be my daughter, much more than my own daughter! My daughter has freckles and light brown hair and blue eyes. I told her, “You can never play my daughter in a movie!”

Bailee’s great! We’ve got a lot more of that mother-daughter camaraderie, clashes. She may have some of my abilities or witchiness, as whatever you might think it is.

With that time jump, are they going to recast the two other kids, the older kids?

What do you like best about Cassie and the storylines on “Good Witch”? Is there anything you would change?

I love the way she and the stories have evolved. I’ve had a chance to show my not-so-perfect side. I would say in the first movie, I was the perfect woman. Nothing ever bothered me, everything was perfect, and I could see through people and figure out what was best for them. A little too perfect, which was great for the first movie – to make seven movies like that would probably have been very boring. As it progressed, we threw in a more darker side … she would be troubled, where things would throw her off, or things weren’t going as planned … things that others can relate to. Of course, being Cassie, she pulls things around and makes it go right in the end.

Yes, I’m sure one of us has cast a witchy spell! Gosh, I don’t know. Of all the things that I’ve done, “Good Witch” gets equal recognition. Like if I’m out on the streets, or I’m traveling and people recognize me, I would say it’s almost a third … “Good Witch,” “JAG,” “Army Wives” that they recognize me from or is their favorite of mine.

You played three very different characters on three very successful shows. Do you have a favorite? Was one more challenging than another?

Gosh, I don’t know if I can pick a favorite. That’s tough. They’re so different. I loved “JAG,” my first real success as an actress. It was huge and I’m a tomboy, so I got to be on jets and aircraft carriers, military bases and playing with all those toys and being a tough girl. I love doing martial arts and all that stuff. That was certainly great.

“Army Wives” was so different for me. To play a woman who was abused … so emotional having my son killed in war … some really challenging work we did on that show. So that was amazing.

Of course, “Good Witch” is totally the opposite – it’s nice and light and very, very different. I’m fortunate I’ve been able to play all those things. Thank God I haven’t been typecast yet!

Any role you’re dying to play?

Oooohhh! Well, having done those three very different characters, probably something totally different like maybe a drug addict or a crazy person, somebody way out there.

I asked some of the “Good Witch” fans if there was anything they wanted to know, and one thing that kept coming up is that you have such flawless skin and a great physique. Do you have any hints or tips that you can reveal? Fitness routine?

Oh my gosh, that’s nice! Wow! Well, I don’t know that I would call it all that, but that’s really flattering! My mom has flawless skin and so does my grandmother, so I would say a lot of that is totally genetic. I’m very fortunate, but I do make sure I take off all of my makeup every night – mascara, all of it. I know some people go to sleep with all that – I always wash it off, cleanse and moisturize … different products. As long as you use something good and take care of your skin.

And exercise? I try to exercise … sometimes it’s only twice a week, every once in awhile it’s less, sometimes it’s three. Nothing crazy. Just trying to keep your body from falling apart.

Any favorite fitness routine? Do you jog? Bike?

Lately, my favorite has been Pilates. I’ve always liked Pilates. I’ve been gravitating toward that a lot. It’s been really hot, but otherwise I really love to walk and hike. Those are probably the two big things.

Coffee (she laughs). I’m drinking one right now. I ran into Starbucks while I was waiting for you to call back!

If I had to pick one, it would probably be Italian? Hmm, yeah, that’s a tough call. I like food. Oh! Hamburgers. I’m a big hamburger fanatic. So if I go to a new restaurant and they have a gourmet burger, like some amazing yummy thing with a special bun, I’ll try that for sure.

I’ve been really into Ed Sheeran lately. Love his voice and his songs, they’re just beautiful.

My daughter was reading a book for school that sounded really interesting and I thought, wouldn’t it be cool to read the same book she’s reading. She’s in sixth grade and she couldn’t stop talking about it. I wanted to read it with her. So I’m reading a book call “Wonder” (by R. J. Palacio).

(Coincidentally, Laura Benanti said similar when I asked her about her first celeb crush. Read it here.)

What did she say?