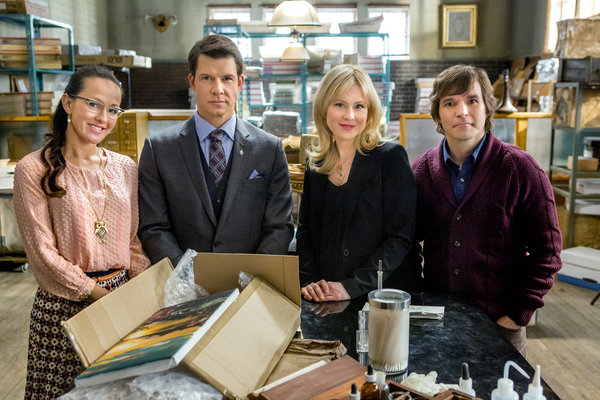 Hallmark Channel announced this week that it would be filing a change of address form for their scripted series “Signed, Sealed, Delivered.” SSD will be relocating to its new home at Hallmark’s sister network, the newly rebranded Hallmark Movies & Mysteries Channel. Not only is the show moving to another channel, it will be changing its format from a one-hour weekly episodic to a series of two-hour movies.

Aside from the pilot, the first two-hour movie, “Signed, Sealed, Delivered Christmas” will debut on the network on November 23 at 9 p.m. with three more two-hour original films slated for 2015.

To prime viewers for the upcoming holiday SSD movie, Hallmark Movies & Mysteries will air a marathon of the first season of the series this Saturday, October 11 from 11 a.m. – 11 p.m. ET/PT, 10 p.m. C.

“Signed, Sealed, Delivered” stars Eric Mabius, Kristin Booth, Geoff Gustafson, and Crystal Lowe as a group of postal workers who turn detective. Assigned to the Dead Letter Office, they attempt to return lost letters to their intended recipients. But as the quartet solve the mysteries behind each letter, they also discover friendship, laughter, and love along the way.

In the Christmas movie debuting on November 23, Oliver, Shane, Rita and Norman are working around the clock to redirect Santa’s mail just as Oliver runs into his former Sunday school teacher (Marion Ross). When they receive an emotional last-minute plea not meant for Saint Nick, but instead written to God, they must delay their own travel plans to make sure one little girl doesn’t lose her Christmas joy—something Oliver and Shane are also struggling to find as they each face painful holiday memories.

With a little guidance from a mysterious post office volunteer, Jordan (Rob Estes), the POstables are more surprised than anyone to discover they’ve been a part of more than one miracle on this Christmas Eve.

#POstables, do you want to forward your viewership on to the new network or would you rather Return to Sender? Tell us in the comments below.