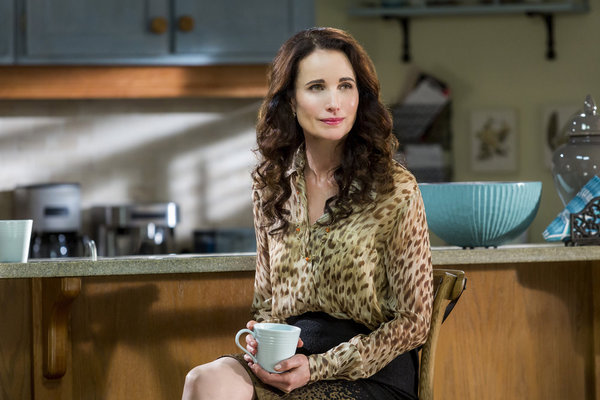 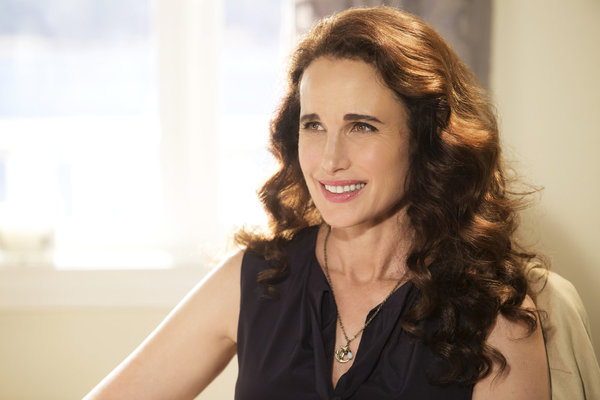 Andie MacDowell almost turned down a role in Hallmark Channel’s first original series, “Cedar Cove,” She has her daughters to thank for her change of heart.

“I read the script about a small town and an incredibly intelligent woman who helps people, and she’s bright, and interesting, and the town was lovely,” said the beautiful, soft-spoken 56-year-old mother of three. “But shooting was supposed to start that November, and it was a huge sacrifice for me because my youngest daughter, Margaret, was entering her last year of high school. I wanted to have that last year with her.”

So she did what any good mom would do. She showed the script to Margaret and to her other daughter, Rainey.

“They came to me the next day and said, ‘You’re doing this, you have to do this, this was written for you,’” she said. “They know my spirit. I just like sweet things in life. I like the countryside, I want life to be sweet, because the world’s crazy. And I cling to the thought that we can have sweetness within this chaos. And so I said yes, because they told me to.”

And so began her newest role as Judge­ Olivia Lockhart on “Cedar Cove,” an original series based on the books by Debbie Macomber, now at the end of its second season. Her character, Olivia, fights an uphill battle of balancing career with family and finding love, while doing her best to care for the township she calls home.

“On a plane I sat next to a woman who teaches law and she gave me a lot of good advice and I’ve spoken to some judges,” said MacDowell. “Luckily for me, it’s not really a courtroom drama and it’s such a small town that whenever you see me in the courtroom, it’s usually something humorous about the town.”

MacDowell loves Olivia’s strength. “What’s interesting is her caliber of strength, the amount of control she needs to have of herself and how she deals with people,” she said. “She doesn’t stop being a judge when she leaves the courtroom. I think she carries that responsibility with her. I’m learning more all the time. You know, you learn as you go along who this person is. I think that’s the great part of doing television that I’ve never had the opportunity to do. I’ve had limited amounts of time to get on board with a character, and now I’m growing, and that’s nice. Sometimes all the pieces come together and it’s the right people, and the right place, and the right time, and the right material, and it works. You just have to be grateful when that happens.” 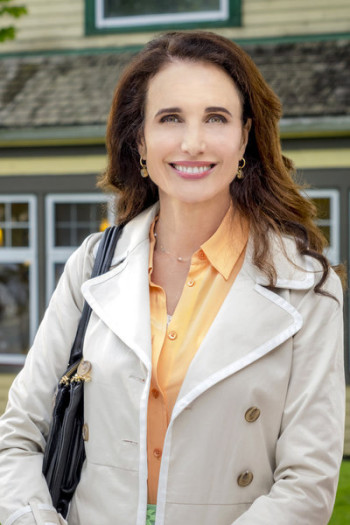 She also said that she loves the spirit of “Cedar Cove,” the characters and the people. “I guess there are also a lot of people out there who are like me and want something to watch that’s comforting,” she said. “There is romance and love, a daughter that she cares about and a funny best friend. And it was the town that appealed to me. I thought that I’d like to live there.”

MacDowell has had an extremely successful modeling and acting career, appearing in some of the best movies of the 1990s, such as “Sex, Lies and Videotape,” “Four Weddings and a Funeral,” “St. Elmo’s Fire,” and “Groundhog Day.” Recently, she was in the remake of “Footloose,” and made a guest appearance on “30 Rock.”

“You want to be an actress and all of a sudden you’re a movie star, that’s just insane,” she said. “It’s amazing, because in my spirit, in my heart and in my soul, I’m still that little kid running around in the woods in Gaffney, SC. But at the same time, I do believe there is an artist in me that was able to create something, and give something, and love what I do. Somehow the universe was on my side, because everything connected, there was synchronicity, whatever you want to call it. I’m thankful for everything that’s happened to me.”

One day she still hopes to star in a romantic comedy major motion picture and, no, she can’t imagine any sequels to any of her movies. “Bill Murray is not going to do a sequel and Harold Ramos is gone, so that’s not going to happen,” she said. “I would love to do a great romantic comedy, especially about a mature woman, because we don’t have that out there. That’s one of the things that’s great about Cedar Cove, is I think there’s so many people that are enjoying seeing these mature people having a romance.”

She said that with all of her fame comes great responsibility. “Fame is not what everybody thinks it is,” she said. “It’s actually a huge responsibility, but the good thing about fame is that you can do something positive with it. It’s a big gift. I don’t need to be recognized by everybody. I’m thankful that they watch my show, because that’s what I love to do. That’s my creative energy. I love my job, but I want to use my name to do something positive.”

MacDowell hopes that, most importantly, she’s an inspiration to her children. She and her daughter Rainey partnered with “Tylenol Stories of Strength,” where people share stories about someone who’s given them strength to do something important. In turn, every story shared supports dosomething.org, an organization that encourages others to make a difference. MacDowell said it meant a lot to hear how she inspires Rainey and to also be able to talk about her own mother in a more positive light.

“I liked the idea of encouraging other people to tell their stories,” she said. “It was a wonderful opportunity to do something with my daughter that was inspiring to both of us. Rainey and I really were looking forward to having this opportunity to say how we feel about each other.”

Next summer, Andie MacDowell can be seen in “Magic Mike XXL,” the sequel to the 2012 drama starring Channing Tatum. Visit Tylenol Stories of Strength for more information.