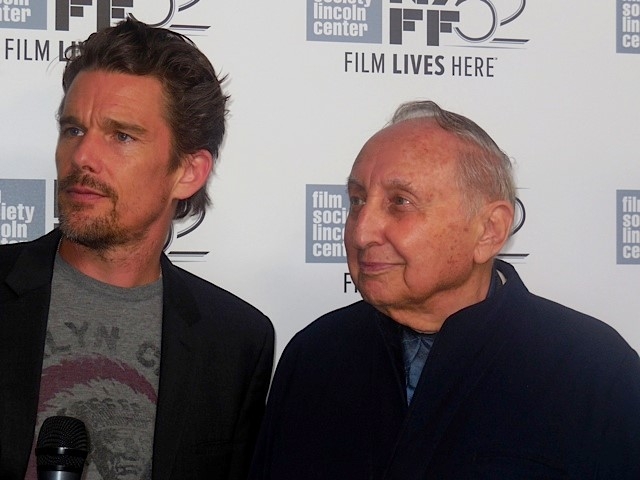 All photos taken by and used with permission of Paula Schwartz.

At the New York Film Festival Monday night, the filmmakers of five films shared the red carpet and magically, no one got in each other’s way.

Ethan Hawke hit the red carpet looking relaxed and dapper. He was in a happy mood for the premiere of his directing debut, “Seymour: An Introduction,” about octogenarian pianist Seymour Bernstein, who decades earlier gave up his professional stage career because of stage fright. Read more about the “Seymour” Q&A here.

What was touching was how the entire length of the red carpet Hawke held Seymour’s hand. Bernstein looked happy but a little overwhelmed, a blissed-out deer in the headlights.

I asked Bernstein what it was like for him, being back in the spotlight? Was he enjoying it this time around?

“Unbelievable,” he told me. “But I can’t even say I’m enjoying it. I’m levitating.”

As for the 43-year-old actor, he said the directing mode was one he easily slipped into. “To be honest, when I was young, I ran a theater company and that was about the hardest thing I ever did, raising the money and trying to be in charge of your friends,” said Hawke. “So I started having experiences directing long before I even thought of directing ‘Seymour.’ I feel pretty comfortable doing that. I really like it.”

Looks like there may be another directing gig in Hawke’s future, but a publicist pulled him away before we could ask.

Argento, whose father is trash horror director, Dario Argento, has had a troubled childhood, but her film, “Misunderstood,” about a nine-year-old who is abused and neglected by her parents, is not inspired by her own story. She told me, in her incredibly deep voice, that “I tried to find the child we all have inside, a child who hasn’t died, that inside still wants to speak and be understood.”

Another film about a trouble youngster, this one about a boy who puts two bullets in his head and survives, is “Two Shots Fired,” by Argentinian director Martin Rejtman.

The idea for the film came at a screening for his first film, he told me. “Someone pointed out a guy who had just done the same thing the young guy in my film did — shot himself, twice. Something clicked there, and I started writing with that idea in mind.”

He added, “Also, my previous films were going towards comedy in a way, and I wanted to get away from that. I thought that would be a strong scene that would lead me in another direction, but I couldn’t help at the end getting more and more humor in the scenes. Sometimes you have intentions and then something else happens. I like that too, somehow the unexpected impinges.”

Last on the red carpet was the charming and funny French actor Mathieu Amalric. The former Bond villain, best known by American audiences for “Quantum of Solace” and Julian Schnabel’s “The Diving Bell and the Butterfly,” also appeared recently in Wes Anderson’s “The Grand Budapest Hotel” and starred this year in Roman Polanski’s “Venus in Fur.” He must be France’s busiest actor.

Directing is not new to him. He told me this was the sixth time he has been on the other side of the lens. His new film, “The Blue Room,” is a twisty sexy noir adapted from a novella by Georges Simenon. Amalric does triple duty on the film; he directed the film and also co-stars with his real-life partner of ten years, Stephanie Cleau, with whom he also wrote the script.

What inspired him to adapt the book into a film?

“It was a sort of love for a genre and to do a film, small budget film, a police film with love, this sexual attraction that we are all capable of falling into and the fact that those moments you are someone else, but maybe you are, in fact, yourself in those moments and you’re not allowed to live that. You have to restrain that inside you in everyday life, the fact that the body just talks at your place and you have to listen to it.”

Then he glimpsed “Dressed to Kill” mystery maestro Brian De Palma on the other side of the red carpet. De Palma came rushing over and they hugged. Amalric seemed surprised and touched that De Palma was there to see his film.

“The film is not long,” Amalric told the “Scarface” director. They made plans to meet afterwards.

After De Palma went into the theater, Amalric turned to me and said softly, “That was Brian De Palma.” Nervously, he pretended to start biting his nails. Then looking a bit like a charming elf, he smiled with those hugely expressive eyes and walked lightly into the theater.