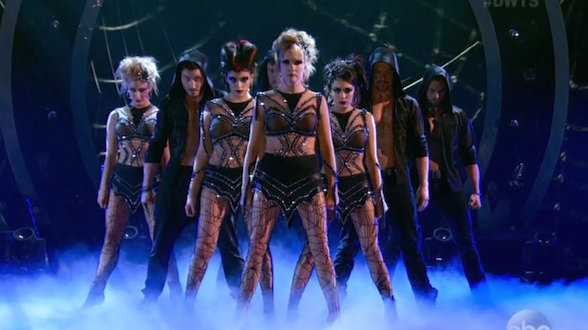 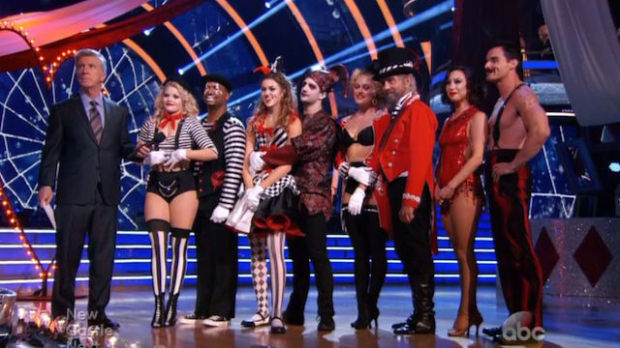 It’s a fun night on “Dancing with the Stars,” as they do Halloween up right. Judge Len Goodman and host Erin Andrews both return for a ghoulish, frightful night full of murder and mayhem, with crazy costumes, fun concepts that work, and entertaining dancing. There’s even some practical joking, as the troupe members wear freaky masks to scare the glitter out of the contestants. I personally hate that, because I scare really easily, but schadenfreude can be extremely entertaining.

The whole cast kicks things off with a great opening number choreographed by Mandy Moore, with cute costumes and actual dancing instead of just flexing and posing. With the promise of the team dances, which are always entertaining, the stars have two dances each tonight. More of the dances are good than bad, despite fairly low scores from the judges, which makes for a difficult decision for My Top 5.

Lea and Artem’s Argentine Tango: They’re including a lot more live music on the show, which means that it’s even more of a stretch using music that is the proper rhythm for the dances they’re doing. Lea and Artem dance an Argentine tango to Nikki Yanofsky’s song Necessary Evil, and though it’s really not a tango, it works pretty well. Lea looks great and her dress is fantastic. She does seem careful and a bit nervous, but she has great legs, and handles those jumps and ganchos well. I agree with Julianne though: she needs to give herself a break and trust herself, because she’s doing great.

Janel and Val’s Viennese Waltz: I’m not sure why the judges are complaining so much about this Viennese waltz. They’re right that it’s a little too slow to be a Viennese waltz, but other than that there’s a fair amount of content, and I really enjoy the routine. Granted, I had to watch it twice because I was so distracted by Janel’s crazy outfit the first time, though I ultimately decide that I like it, despite it being a tad too revealing. Julianne’s right, her developé is a little weak, but she plays her character well and dances beautifully.

Sadie and Mark’s Paso Doble: This is a great routine. Yes, there is quite a lot happening, and Mark’s not the only choreographer to overcomplicate, but it’s really fun, and there’s still a lot of content. Sadie needs to watch her hands sometimes; they can get a little claw-like. Carrie Ann makes an interesting point about Sadie losing some of the paso doble strength because she’s playing a demure character, but she’s also so adorable, and I think the concept works really well with the dance. I also love this song, Come With Me Now by Kongos, and its use of accordion.

Team Itsy Bitsy: I generally love the team routines. They are often good, not just because it’s a change of pace and allows for more choreographic possibility, but it challenges the weaker dancers. Yes, you can hide the weak links more easily, but dancing with other people who are better than you makes you stronger. It forces you to reach a new level, and Michael shows this, looking pretty good in his solo and with the team. Their sparkly spider costumes are fantastic, and they all look great together. Lea still needs to relax a little, but she’s dancing well and it’s a strong team. The choreography is very cool, with its moments of unison and cool arm work.

Team Creepy: At first glance it’s hard to tell the theme because they’re not all wearing the same costume, but I agree with Carrie Ann: I really like that they have their own individual personalities. The choreography is great, with hints and references to “Rocky Horror Picture Show” but without being swallowed up by what we remember of the Time Warp. This routine holds its own, and I love it. However, I don’t understand how Carrie Ann can say she likes this routine better than Team Itsy Bitsy, but then give them a lower score.

Bethany and Derek’s Paso Doble: Bethany looks nervous and needs a little more sharpness, but this is a really cool, involved, theatrical paso doble. Derek’s drilling, which is taken out of context and is not as abusive as it looks, clearly pays off. That hair is redonk though.

Tommy and Peta’s Quickstep: Tommy’s still terrific, looking here like Jonathan Pryce in “Something Wicked This Way Comes,” and quickstep is difficult with lots of bouncing and high energy. He needs to watch his posture and keep his butt in, but he’s great.

Alfonso and Witney’s Rumba: Rumba is not my favorite dance, perhaps because the exhibition rumba seems like a series of poses that looks nothing like the social rumba, but this routine is beautiful. There’s quite a lot of content, and Alfonso dances it flawlessly, despite all his injuries. The end reminds me of Derek’s incredible “Titanic” rumba with Shawn Johnson that absolutely floored me. Congrats to Alfonso and his beautiful wife on their new baby!

Antonio and Cheryl’s Viennese Waltz: There are some nice moments in this waltz, especially once they start moving, but Antonio is still so stiff. It’s interesting that the slo-mo recaps sometimes don’t do them any favors: the deathdrop looks fairly smooth in real life, but in slow motion it looks downright painful.

Michael and Emma’s Jive: This is such a great song, but I was thinking before they started that it’s not a jive. It’s more of a polka, and that’s exactly what they do. Emma works so hard, but she mostly dances around her partner. It’s time for Michael to go.

After Team Itsy Bitsy performs, Tom Bergeron tells them all that they’re all safe. This means Michael Waltrip is safe again. Ugh, his time has definitely passed. Tom also informs Team Creepy that they are all in jeopardy, though it’s pretty clear that Alfonso and Sadie are not going anywhere soon. That means it’s between Antonio and Tommy, and fortunately, America finally gets it right this time and votes Antonio off. He worked hard this season and did his best, but he’s so stiff in his movements that it’s hard to ignore.

So what do you think, dance fans? Are you happy with the results? Which team did you prefer? Which are your favorite dances? Cast your votes in the comments.