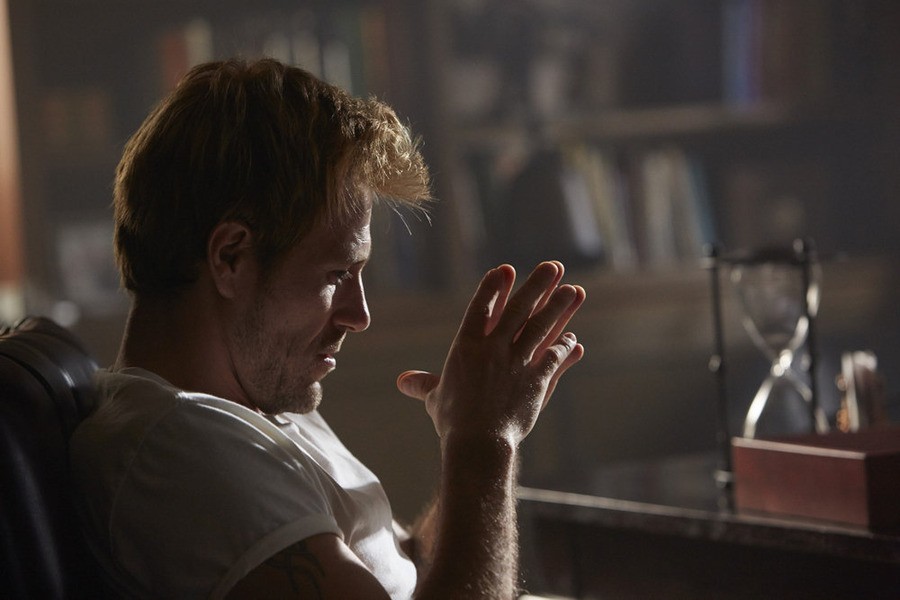 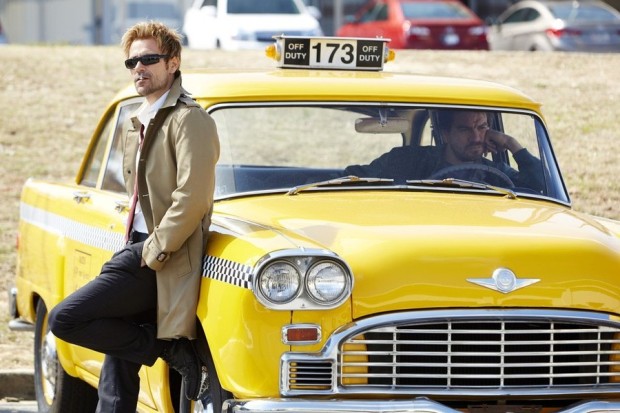 (Editor’s Note: Welcome to Danette Chavez, our newest Reel Life With Jane writer! Check out her sites and social media links in the author box below the story. – Jane)

Well, here it finally is: the series premiere of NBC’s “Constantine.” OK, so maybe we haven’t all been on tenterhooks awaiting its arrival, let alone on a Friday night. (Full disclosure: I have.) After all, we’ve got lots of detective shows, and lots of superhero/crime-fighting shows, and lots of supernatural shows filling up the fall TV schedule. And although “Constantine” might initially appear to be some mixture of the above, I’m hoping it’ll break from the pack.

I’d be remiss not to mention that the producers have already nixed the student-teacher relationship between John Constantine (Matt Ryan) and Liv Aberdine (Lucy Griffiths) that they had in mind as the main story arc. Which means we’ll be saying hi and bye to a lead character within the first hour of this series. But that doesn’t mean this particular recap will be an exercise in futility! There are plenty of series regulars to focus on, so let’s get on with it.

We open at Ravenscar, a psychiatric facility where Constantine has voluntarily committed himself. “In my line of work, there are days you want to forget—and some you can’t,” he narrates over a scene where he’s getting some electroconvulsive (fka electroshock) therapy. There are flashbacks throughout the episode to the botched Newcastle exorcism that still haunts Constantine: a young girl, Astra (Bailey Tippen), lost her life and her soul to the demon, Nergal, all because Constantine got a little too cocky about his conjuring skills.

Which is why later, when we glimpse his business card with the titles “Exorcist, Demonologist, and Master of the Dark Arts,” Constantine demurs at the last one, insisting that he’s more of a “dabbler.” The psychic “healing” is interrupted by a possessed patient, whom Constantine helps before admitting that there’s no avoiding what he’s been put on this earth to do: hunt and battle demons.

And he’ll get plenty of help from his friends and associates, including Chas (Charles Halford), who’s looking like the muscle of the group. There’s also an angel known only as “Manny,” played by Harold Perrineau (and it is always good to see Harold Perrineau), who enters into a kind of partnership with Constantine. We also meet Ritchie Simpson (Jeremy Davies), a computer hacking type who’s worked with Constantine before, which is why he’s reluctant to help him in the premiere.

Finally, there’s the aforementioned Liv, who is the daughter of Constantine’s old friend, Jasper. She shares her father’s ability to see into the spirit or demon world and recognize them in our own, which may be why she is being hunted by Furcifer, an electro-manipulating demon. Constantine saves her from Furcifer, but first helps her develop her  “scrying” or divination abilities. All her power is ultimately for naught; Liv is too shaken by the episode’s events and decides to move west. But she does leave a blood-dotted map for Constantine & Co. to use to save souls.

That, along with enough Easter eggs to delight even the most demanding Hellblazer fan, is the series opener. Although the pilot suffers a bit from Liv’s abrupt departure, I think the producers made the right move. Lucy Griffiths was fine as the wide-eyed novice, but I think all the exposition-heavy conversations between Liv and Constantine would have weighed the show down in the long run.

We sorta meet her “replacement” in the closing scene: a woman sits on the grounded sketching, surrounded by scenes she’s drawn of Constantine in battle. She’s Zed Martin (Angélica Celaya); in the comics, she’s a powerful psychic, and also Constantine’s one-time lover. Though it remains to be seen how the source material will inform her role, the sneak preview at the rest of the season hints at a mutual attraction between the two.

The names of demons are very important in the comics, and it looks like they will be key in the TV series as well, which gives a whole new meaning to “better the devil you know.”

My DC-loving heart beat a little faster when I saw Dr. Fate’s helmet.

What are your thoughts on the “Constantine” series premiere? Will you miss Liv? Did you make any sense of the Latin spoken? Sound off in the comments below!