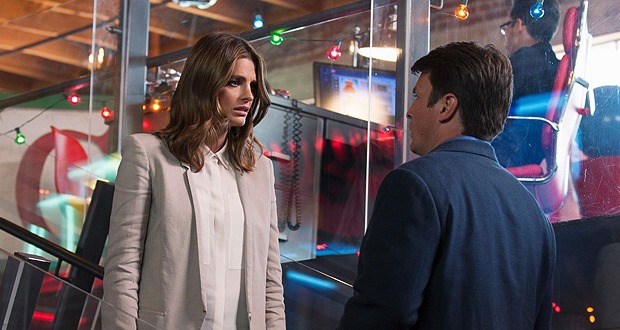 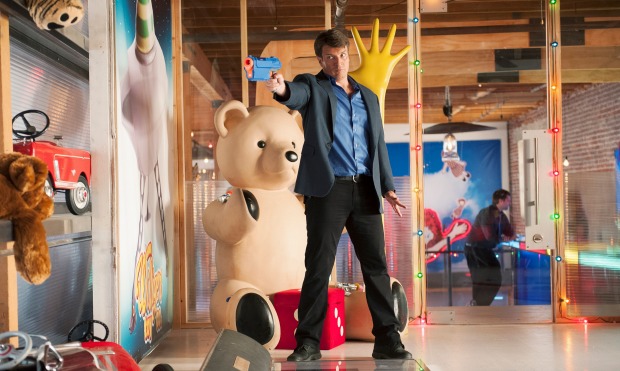 Wow, so far season 7 of “Castle” has been great! Yes, I know this was only the second episode, but they have really been good, don’t you agree?

This week, Beckett, Castle and the gang were in full force trying to figure out what on earth happened to him. I’m still confused, but like how they are having this play out. There are a lot of unanswered questions, but at least Espo is on board now. As I said last week, I was a little irked that he presumed Castle was guilty (of ditching out of the wedding and shady dealings) after knowing him for so long.

In a TV interview, Castle was taken by surprise when the interviewer started accusing him of disappearing for a publicity stunt (his latest book sales were down). Castle, in return, decided to offer $250,000 for any information about his disappearance. Nice. Although that brought on a lot of “fake” calls – one who claimed he and Castle had been abducted by a spaceship –  made me laugh.

Yes, there was another case going on, too. A man was found floating in the river with his face and hands scrubbed clean of DNA. Who and why? He was a toy store CEO involved in drug smuggling – which was a pretty good story. The best part of that storyline was how the grieving wife dealt with her husband’s death and not knowing what happened or why. The writers made the story relevant to Castle and Beckett’s story. Through the investigation, Castle started to realize what Beckett and his family had gone through – and Beckett showed us her emotions.

Always entertaining was Martha, who found a date from her grief counseling (yes, she had been affected, too). There’s always a bright side to things with her. It’s good that we saw the family deal with issues from Castle’s two months away.

Beckett did confide in Lanie and told her there was a shadow between her and Castle. Beckett still had her doubts – although pretty hidden. We know she loves him and really wants to believe him – which she should until proven otherwise.

After some good police work, Castle and Alexis went to Montreal where they hoped a key to a safety deposit box would unlock the mystery. Well, it did unlock some questions. I was a little scared for him to open the box, and then when computer memory cards were found, I was really scared … and then he and Beckett watched the one left for her. He said, “If you’re watching this, I must be dead … know I loved you … always…” Geez, what was going on with him! Still don’t know.

The one thing we do know is that something bad happened to Castle when he was 11 years old – something he wanted hidden forever, something he said he didn’t want to know. “They” (who are “they”?) went to great lengths to keep it hidden.

“Some mysteries aren’t meant to be solved.” I really liked that line – gulp.

Whatever happened is why Castle became a mystery writer! I can’t wait to hear what it is, can you? I really have no idea, but it’s gonna be good, you can count on that!

After the case of the murdered CEO was solved and Castle was back from Montreal, he and Beckett laid in bed talking about the past and future – things were still not right. Castle said he wanted to get married the next day, but Beckett said they needed time – a month. He agreed.

Neither of them looked like they were happy – not with each other, but about the unknown. What was Castle’s hidden dark secret? I just hope that they do get married in “a month.” I’m just wondering how Castle’s secret – whatever it is – will affect all of his relationships.

Oh, and I’m happy about Espo and Lanie, aren’t you?