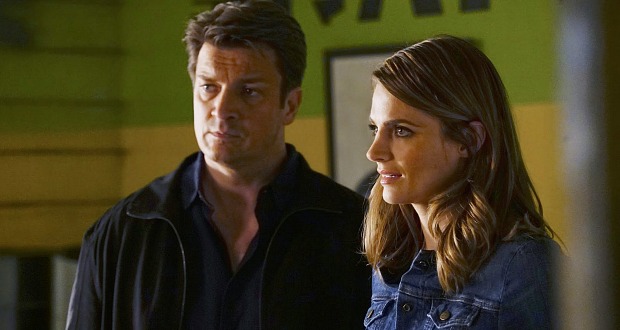 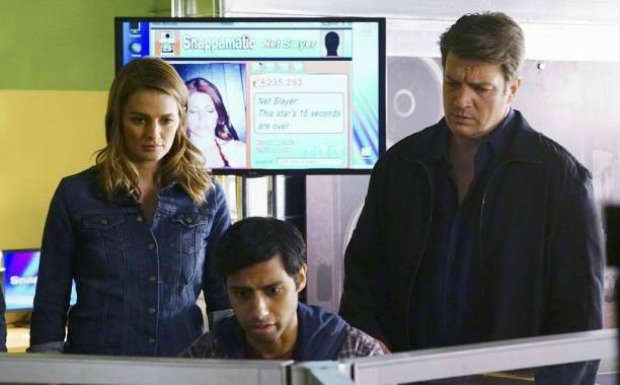 This episode of “Castle” (like all of the episodes so far this year) was very good. It addressed social media – the good, the bad and the bullying – huge subjects. Castle was planning on benefiting from the first to help promote his new book “Raging Heat” (did you know you can buy it on Amazon? Here it is). Castle, “Castled it” during the filming, but we all “knew” the video would turn out perfect in the end, thanks to the wonderful world of editing – or maybe not.

The case was the murder of a social media junkie and guru posting photos, Abby Smith. Unfortunately, she was killed and a photo was taken of her by the killer and placed on her “Snappamatic” site – yikes. To make matters worse, one of her followers posted a picture of her dead body online. Beckett and the gang gathered evidence and found the killer’s user name – NET SLAYER. He turned out to be a young man who had been bullied in high school by his football teammates, who posted a very unflattering video of him online. It caused him to be the butt of many jokes and an outcast at his school. Unfortunately, this happens a lot in our world today, and a lot of kids are really hurt emotionally from it.

Bill Garrett, an ex-cop from the cyber-crime division, ended up being a big help to the team after he was mistakenly arrested for Abby’s murder. He knew NET SLAYER as Adam Lane. The poor guy really went off the deep end after his ordeal in high school, and Bill felt bad he couldn’t have helped him more back in the day.

Adam toys with the team and sends out some clues as to who the next victims will be. He wanted people to know who he was and to have a legacy. Too bad he choose one of hate and revenge.

He kidnapped the two founders of Snappamatic and had them tied and hooked up to be electrocuted on a timer. It was disturbing that he posted them online, with a live vote for his followers to choose which of the two should live or die. The death was also going to happen online for the viewers. Whoa. I’m thinking that this gives the “nuts” out there some crazy ideas, gulp.

Beckett saves the day with some pretty intense questioning and one great speech to Adam. She was able to get enough clues out of him for Bill to figure out where they were being held. Ryan and Espo got there in the nick of time!

The end was funny, wasn’t it? Castle was so proud to show Martha, Alexis and Kate his promotional video, but it turned out being a total humiliating joke on Castle. It was almost a reel of bloopers – very funny! Hey, that caught peoples’ attention – Castle should be happy. Alexis announced that it already had over a million hits. That sounds like a good promotion to me!

Ryan has a  blog – The Ryan Report.

Why does Gates still want to be called “Sir” when she is a woman?

Bullying needs to stop – it can ruin peoples’ lives.

What’s with the new gal at the precinct?

Are you enjoying “Castle” so far? Are you ready for the next episode in two weeks – the wedding was teased! Leave thoughts in the comments below.