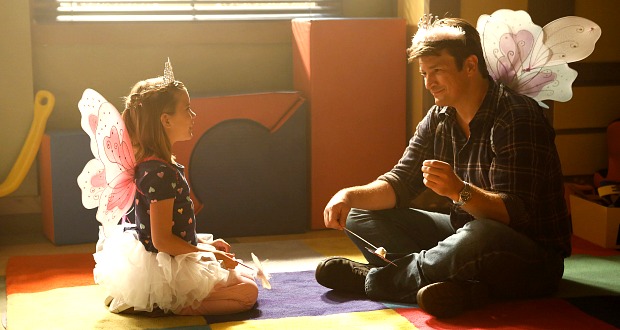 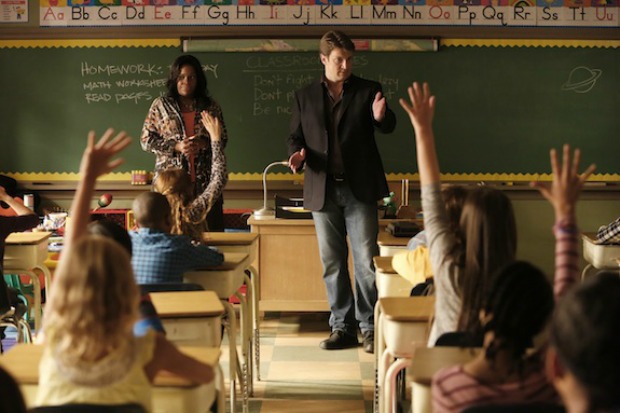 In this episode of “Castle,” the team investigates the murder of an ice cream truck driver (Anton), who’s the son of Russian immigrants. The witness happens to be a second grade student – so they thought. They needed someone who was an adult, but childlike, to spend time in the second grade classroom and figure out who the witness was. I wonder who they picked? Of course, Castle.

How cute was Castle trying to make friends with the kids. And there always has to be one troublemaker – Jason. He and Castle sparred gently throughout the episode – making faces (yes, Castle joined in) and playing tricks on one another. Too cute. I liked how Castle tried to get the kids to divulge murder information (not in a scary way) by having them all be “writers.” Hey teachers, take note, have your kids take time for “free writing”  – about anything.

Anyway, the team found out that Jason’s sister Natalie, was Anton’s instructor in a graphic design class he was taking (she was the one in the ice cream truck and saw the murder). Anton was making fake passports with his childhood friend Dimitri and an ex-cop, for Russian immigrants to use to get back home – they had been brought to America with high hopes of making it in this country, but had their papers taken and forced to work in sweatshops.

One day, Anton recognized a photo of a Russian criminal (in every sense of the word) and the guy was out to kill anyone who could identify him. Unfortunately, that was the case for Anton, Dimitri and the ex-cop. Natalie had a photo of him, and he was out to get it, but Castle and Beckett got to it first. There was a fight in the classroom, and eventually Castle threw a jar of marbles that tripped up the bad Russian long enough for Beckett to cuff him. Yay!

Beckett and Castle are so cute together, don’t you think? There still hasn’t been much talk about where Castle was or what the big secret is. However, Alexis was very protective and worried about him in this episode – even having a tracker on his phone. They had a nice father/daughter talk at the end, and he assured her he wasn’t going anywhere. They have a good relationship – I really like it.

The look on Beckett’s face when it came to her that Castle was the one for the classroom assignment – you know what I’m talking about.

Teacher Leslie Ruiz when she realized that Castle had a special magic with her class.

Castle and Jason sticking silly notes on each others’ backs.

Castle and Alexis having their talk at the end.

Just a side-note, I have really enjoyed the first four episodes. Castle is at the top of the list or close in my little box of favorites. I just love these stories, the acting and the chemistry of the entire cast. I can’t believe this is season 7 already! We better be having a wedding sometime soon – I’m just sayin’…

How did you like this episode? Did you love Castle’s interaction with the kids as much as I did? Are you enjoying the season so far? Sound off in the comments below.