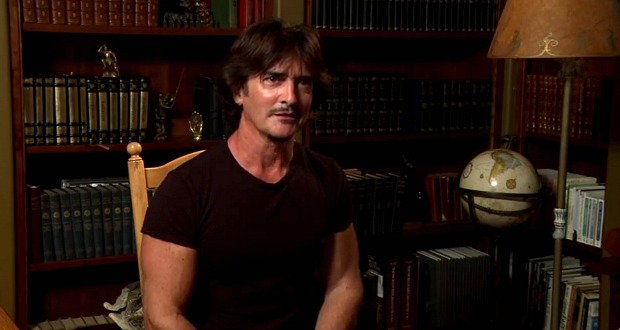 “Little NYU rich boy, what do you know about broken souls and abandonment and all that shit?”

“You want to know the truth? I got it from a movie called the Gunfighter, Gregory Peck, directed by Henry King…”

This little book of literary art imitating film life is a laugh a page to read, with plenty of breath-taking thrills to keep you turning pages. Author/screenwriter John Fusco borrowed from his own life to assemble a cinema-worthy cast of characters to satirize and/or pay tribute to the action film genre in which he lives and works.

Fusco’s ten major movies include “Spirit: Stallion of the Cimarron,” “Young Guns,” and the martial arts move, “The Forbidden Kingdom.”  He has also just finished the sequel to “Crouching Tiger, Hidden Dragon” (premiering on Netflix and IMAX simultaneously), and is filming “Marco Polo” for Netflix.  It takes someone who has worked in the surreal world of filmmaking, learned martial arts, and hung around with stunt men to represent that world so realistically.  Fusco gets the attitude and the lingo pitch perfect in his thriller, “Dog Beach.”

The author mixes a young film school grad, Troy, who carries around a mental category of every stuntman and stunt ever filmed with an aging Hong Kong stunt man who has sunk to breaking knees for gangsters. Louie Mo succumbs to Troy’s sales pitch to stage a comeback for the stuntman whose career never went anywhere to start with.

Of course there’s the sexy young starlet intent on sleeping her way to the top, and the tough-as-nails female stunt driver to provide the female interest, as well as the assortment of wit (the filmmakers) and muscle (the bad guys) that keep you alternately laughing and wincing.

The crew is living in a beach house in Malibu, part of the deal to pay for a movie they are supposed to be making.  The house, surrounded by houses of famous and almost famous Hollywood Figures, sits on a stretch called “Dog Beach,” so of course they call their house the Dog House.

These two and their friends are pitted against the Chinese mafia who finance and control Hong Kong’s film industry.  If that isn’t enemy enough, Troy faces the wrath of a Central American gang who invested in a movie he isn’t really making.

The result is a story full of car chases and action sequences with a slam bang ending. Dialogue is dead on. The characters speak a language only partially accessible to non-Angelenos who are not in the business. Inside references abound. It helps to be a movie maven as you read.

Louis Mo barely understands English and speaks an endearingly garbled version of the language. However, Fusco’s way with words makes you think that this is how Raymond Chandler would have written his noir novels in the 21st century.

Sometimes, Fusco evokes Chandler, as in one of the numerous car chases, when he says,

Of course, the symbols are updated to fit the age.

“Do you even know who these guys are?  They’ll put your heads in a f-ing UPS box and send it to your mother.”

Will the movie get made? Will Louis Mo get his comeback? Would he get to do his one last crazy stunt? I’m not telling. You’ll have to read “Dog Beach.“