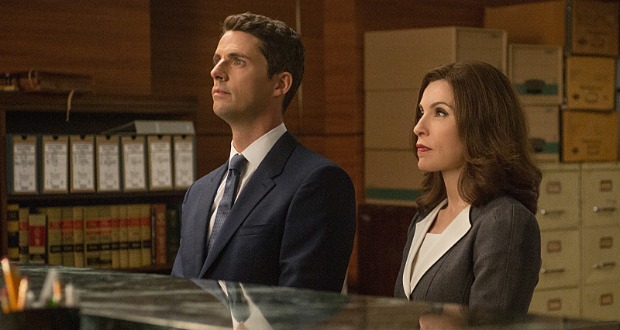 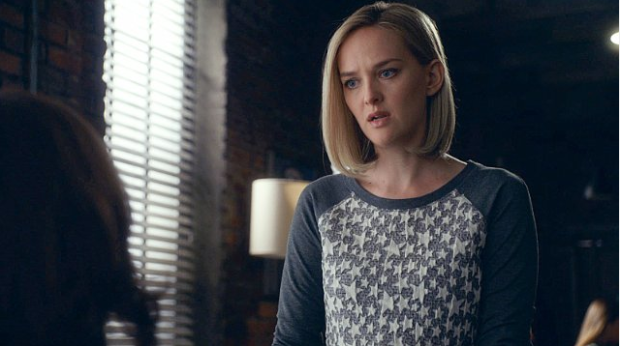 We’re back, good-wifers! The summer flew by quicker than the plot twists in each episode of “The Good Wife,” and we’re back with its season 6 premiere. And not much has changed. Yet.

The episode picks up exactly where the finale ended (right down to the music and fourth-wall breaking camera shots), with Eli asking Alicia if she wants to run for State’s Attorney. Eli wants someone on Peter’s side (at least to some degree) in the State’s Attorney’s office, and who better than Alicia—except that Alicia says no. As does Peter. So Eli spends the rest of the episode putting his slippery wheels in motion, hoping to get Peter, and eventually Alicia, to change their minds.

Meanwhile, Eli’s charming daughter Marisa (the entertaining Sarah Steele from Spanglish) visits, and points out that the new intern Lauren (Katie Paxton), the one Peter flirted with (and maybe more?) in the finale, is not wearing panties. When Marisa asks Lauren about it, Lauren proves Marisa’s suspicion by lifting her skirt right there in the office. She’s a piece of work, that Lauren.

The other cliffhanger from last season’s finale of course involves Diane, who wants to join Florrick/Agos as a partner. She promises to bring 45 clients and $38 million in billing, as well as her prestige, but she wants an equal vote with Cary and Alicia, and wants to bring Kalinda along as investigator, which could mean bad news for sweet, loyal Robyn (Jess Weixler). Meanwhile, she’s going to keep it a secret from Lockhart/Gardner, telling David Lee and Louis Canning that she’s tired of fighting them and plans to retire. They’re not so easily fooled.

All that aside, the big story tonight involves Cary Agos. The writers are fortunately trying to do more with him (while perhaps cashing in on some of the “Orange is the New Black” mania), so they’re making lots of bad stuff happen to him. In a frustrating and seemingly implausible turn, Cary gets arrested, for no reason that we can see. He’s treated unfairly, not told his charges or read his rights, not given a phone call, and—worst of all—chained up to a lowlife DUI played, for some reason, by Jonathan Coulton, the actual real-life singer behind the “Goliath and David” story from last season, who clearly has some fans on the show. Perhaps they feel like they owe him for depicting the musicians in that episode as idiots.

It’s eventually revealed that Cary is charged with conspiring to sell 900 grams of heroin, and is stuck in prison with a $1.3 million bail. The State’s Attorney’s office is clearly trying to use Cary’s arrest to get to his client, Lemond Bishop (Mike Colter), the businessman and drug dealer Cary allegedly met with last May. Kalinda tries to prove that Bishop has a CI who’s trying to get them in trouble, but Kalinda’s the one in trouble when Lemond tells her not to question his men. What else is going on there?

While defending Cary, Alicia goes up against ASA Finn Polmar (Matthew Goode), who hopes that their fighting against each other in court will not do anything to harm their budding friendship. (We also see the glimmer of romantic possibility in their eyes.)

Kalinda also gets some trouble from former flame Sophia (Kelli Giddish), who phones her out of the blue at the same time Cary gets in trouble. Apparently, she knew about the arrest and was trying to save Kalinda from a similar fate.

Alicia has difficulty raising the hefty bail sum for Cary, with the paltry $8,000 from Cary’s parents being of little help, though the overly generous Robyn is doing more than her share by giving $25,000. This could make Diane’s demand to bring in Kalinda difficult for Cary (not to mention his bizarro on-again relationship with the LG vixen). After one of Bishop’s men tests Cary in prison by slicing open his hand, another of Bishop’s men shows up at FA with more than enough bail money—in cash. I guess Cary passed the test. The ASA is on to them though, forcing the judge to refuse the money without knowing where it came from. And so it continues…

Yes, I’ve had a good 4 months to grieve, and life and “Wife” goes on, but I’m still so sad about Will. I miss him. And while I’m starting to get excited about the idea of a potential (and potentially contentious?) romance between Alicia and Finn, I’m also sad that Finn is replacing Will. Ah Josh Charles, you’ll always have a corner office in my heart.

So what do you think, wifers? How long before Alicia is able to get Cary out of jail? How long before she gives in to running for State’s Attorney? Are you excited to see the possible romance between her and Finn, or do you miss Will as much as I do? Are you looking forward to seeing Taye Diggs next week? Share your thoughts in the comments.