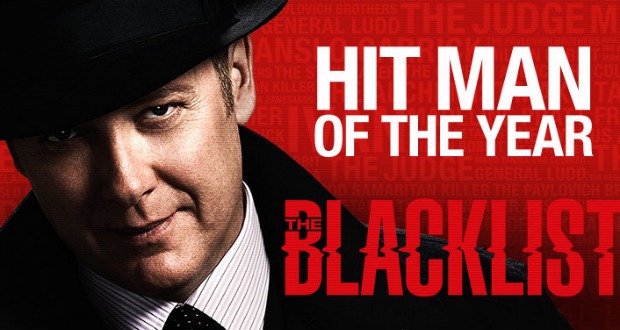 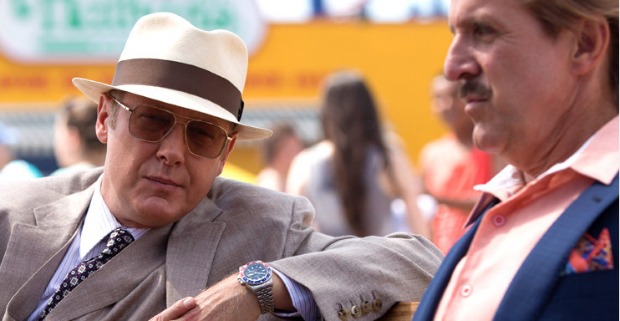 So happy that Red is back! And with a few surprises up his well-dressed sleeve. I love that hat-wearing murderer. A few thoughts on the season two premiere of “The Blacklist”:

That opening scene: Even though he seems to know everyone and has been everywhere, we still get moments like Red handcuffed in the bed of a jeep under fire, piloted by kid soldiers with guns through the jungles of Cameroon. Their destination: a militia compound presided over by General Yaabari, for whom Red has a business proposal (of course). Berlin hired Yaabari’s bounty hunter to find Red. If Yaabari agrees to give Red the names of the other bounty hunters Berlin hired in the next 30 seconds, he can have $3 million. Or he can give Red the names for free… that’s when the first hellfire missile goes off. Seriously, how does Red pull that off, given that he was driven there in a jeep? Anyway, he gets the name: Lord Baltimore, but still sets the cash on fire with his cigar as he wanders off into the jungle (to be picked up by whom, God only knows).

The Post Office: They’re not happy. Red has spent $12 million over the past few months trying to get some leads on Berlin, and zip, zero, nada. Meanwhile, Liz is shacked up in a motel room, paranoid and trying to figure out the connection between Sam, Tom, Berlin and Red. She reminds Red that Martin, Cooper’s replacement, won’t protect the task force without Cooper, who’s retired and heading south to spend more time with his wife’s family. Red gets him back by offering a memory stick with the only copy of “their little adventure in Kuwait.” What’s more, he knows about Red’s diagnosis (someone refresh me on what that was – do we know?).

Red’s Ex-Wife: After Red is whisked off by commandos to a safe house presided over by Mossad Agent Samar Navabi, he praises her tracking skills, but is freed moments later. In the car, Red peruses photos – Aram has discovered that Lord Baltimore’s target is a woman — Red’s ex-wife, Naomi Hyland. Ok, how fun is it that they’ve tapped Mary-Louise Parker for this role? I hope she’s a recurring character, because she’s perfect for the role. I see much bantering in their future. Well, maybe. Read on.

Rowen Mills: Nice to see Krysten Ritter in a meaty role. She’s a cyber engineer whom Baltimore might have bribed for data. Rowen’s aware of the breach, but has no idea who might have done it. Turns out there’s two of her — well, sort of. She had a twin, Nora, who was killed while working for a paramilitary security company. But not really. Nora’s still alive. She murdered Rowan — whose corpse is in a freezer in a van behind their mom’s house! — and now Nora has a split personality. The trigger to get from one personality to the other is the Ink Spots’ song, “We Three,” which Liz plays for her and learns Naomi’s location. But the FBI gets there too late. Berlin now has Naomi in another location, where he’s taking weird photos of her.

The Finger in the Box: About that bantering between Naomi and Red … I’m not sure how happy she is that Berlin lopped off her finger and sent it to Red in a small box. Berlin is going to do to Red what Red did to his daughter – send Naomi back to him piece by piece. Yikes.

Splitsville: Liz meets with her lawyer, who informs her that her marriage to Tom is now annulled. Liz gets a fresh start by cutting her hair and returns to work, overjoyed to learn that Cooper is back in charge.

Your thoughts on the season two premiere of “The Blacklist”? Are you as excited about Mary-Louise Parker as I am?