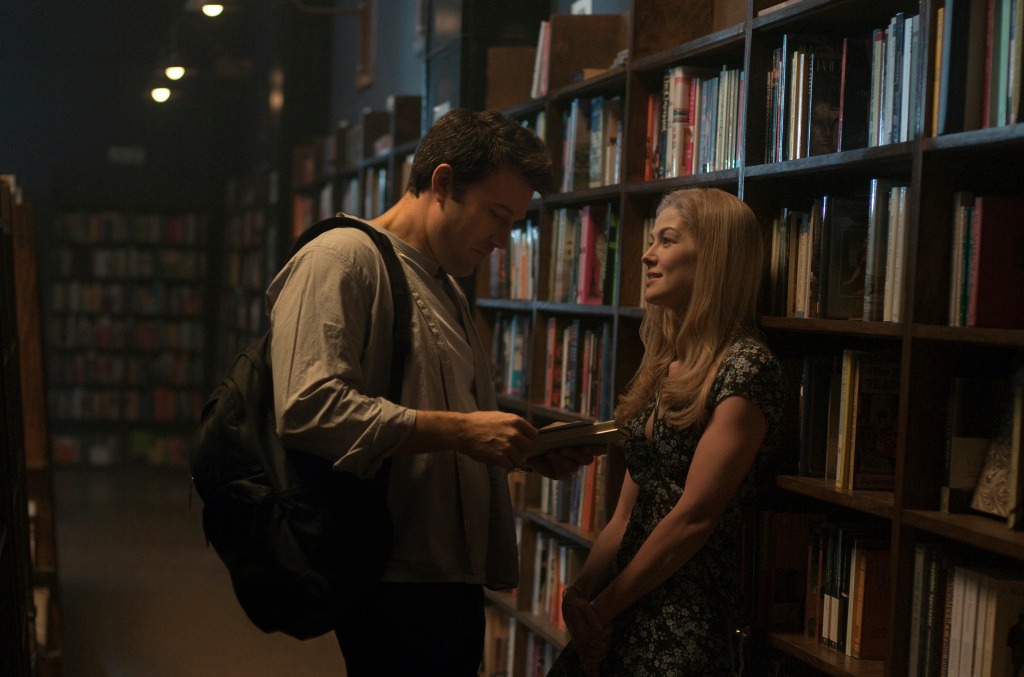 New theatrical releases this week include “Gone Girl,” the Ben Affleck starrer poised to do well this awards season; a terrifying horror movie about a real-life doll named Annabelle; Nicolas Cage in a Rapture movie; a poignant humanitarian drama starring Reese Witherspoon; and a cute crayon movie for kids. Here’s what’s opening in theaters this week.

Directed by David Fincher and based on the global bestseller by Gillian Flynn, this drama/thriller unearths the secrets at the heart of a modern marriage. On his fifth wedding anniversary, Nick Dunne (Ben Affleck) reports that his beautiful wife, Amy (Rosamund Pike), has gone missing.

Under pressure from the cops and a growing media frenzy, Nick’s portrait of a blissful union begins to crumble. Soon his lies, deceits and strange behavior have everyone asking the same dark question: Did Nick Dunne kill his wife?

She terrified you in “The Conjuring,” but this is where it all began for Annabelle. John (Ward Horton) has found the perfect gift for his expectant wife, Mia (Annabelle Wallis) – a beautiful, rare vintage doll in a pure white wedding dress. But Mia’s delight with Annabelle doesn’t last long. On one horrific night, their home is invaded by members of a satanic cult, who violently attack the couple.

Spilled blood and terror are not all they leave behind. The cultists have conjured an entity so malevolent that nothing they did will compare to the sinister conduit to the damned that is now … Annabelle.

Don’t see this super scary movie alone! Directed by John R. Leonetti, it’s sure to get you in the Halloween mood. (Note: There’s a REAL Annabelle doll that’s locked up in an occult museum in Connecticut – visited only by a priest who blesses her twice a month.)

We burst out laughing when we saw a TV spot for this movie. Nicolas Cage is just so … Nicolas Cage-ish. In yet another “people vanishing” theme (it’s a trend lately; “Resurrection” is one of my favorite TV shows), the story follows Rayford Steele (Cage), who is piloting a commercial airliner just hours after the Rapture when millions of people around the globe simply vanish.

Thirty thousand feet over the Atlantic, Rayford is faced with a damaged plane, terrified passengers, and a desperate desire to get back to his family. On the ground, his daughter, Chloe (Cassi Thomson) navigates a world of madness as she searches for her lost mother and brother.

This faith-based movie is adapted from the New York Times bestselling book series of the same name, co-authored by Jerry B. Jenkins and Tim LaHaye.

This animated tale for the pre-school/kindergarten set follows the adventures of a diverse band of crayons that come alive in a little boy’s room when he drifts off to sleep. Yellow (voiced by Christina Ricci), a timid and fearful crayon, inadvertently awakens two unfinished drawings that threaten to take over Color City.

As she embarks on an adventure to discover inner strength and courage, she teams with other crayons and meets fantastical creatures, including Ricky the dragon (Owen Wilson). Filled with valuable life lessons, this sweet movie will entertain and inspire little ones. Directed by Frank Gladstone, the cast also includes Rosie Perez, Wayne Brady, Craig Ferguson and Jessica Capshaw.

They were known simply as “The Lost Boys.” Orphaned by the brutal Civil war in Sudan that began in 1983, these young victims traveled as many as a thousand miles on foot in search of safety. Fifteen years later, a humanitarian effort would bring 3600 lost boys and girls to America.

In “The Good Lie,” Philippe Falardeau (writer/director of the Oscar- nominated Foreign Language film “Monsieur Lazhar”) brings the story of their survival and triumph to life. Sudanese actors Arnold Oceng, Ger Duany, Emmanuel Jal, and newcomer Nyakuoth Weil, many of whom were also children of war, star alongside Academy Award winner Reese Witherspoon and Corey Stoll in this poignant drama.