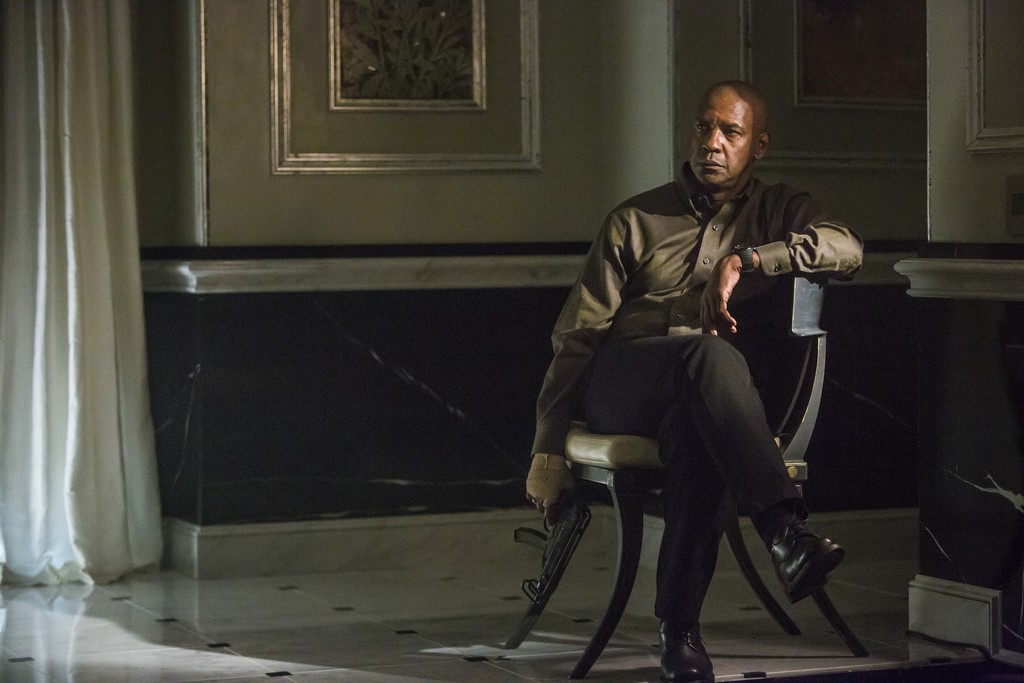 SYNOPSIS: Denzel Washington plays a man who believes he’s put his mysterious past behind him in favor of a new, quiet life. But when he meets a young prostitute under the control of violent Russian gangsters, he can’t stand idly by. 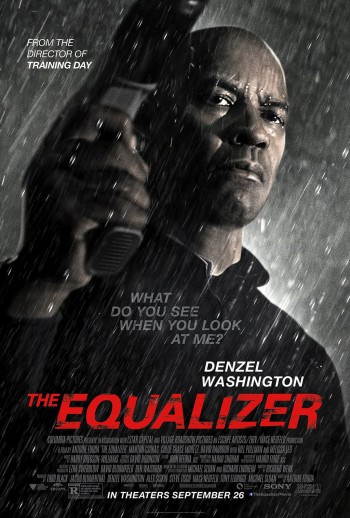 REVIEW: I learned so much from watching Denzel Washington play Robert McCall, a.k.a. The Equalizer. I learned that we should go for “progress, not perfection” (so important). Also, “Don’t doubt yourself; doubt kills” (that’s a big one for me). And if you’re trapped in a Home Depot-like store with an evil assassin, power tools make great weapons.

We’re big fans of the original “Equalizer” TV series in this house. Edward Woodward played McCall, and it was the kind of show where people would come over and we’d all watch “The EQ” take out the bad guys, one by one. The show ran from 1985 to 1989, and we recently bought the first season on DVD (it holds up well over time).

So I was pretty excited when I heard that Denzel Washington would be playing McCall in a feature film. He has just the right amount of mystery and gravitas to make the character his own. However, I’m super bummed that they didn’t use Stewart Copeland’s pulsating theme song from the original TV show. That’s a huge missed opportunity, because as soon as you hear that music, you know people are going to die.

I’m also sad that McCall’s “special projects guy” Mickey Kostmayer didn’t show up in the movie. Played by Keith Szarabajka, he was one of our favorite characters in the series, because he had no fear and was ready to take on any job assigned by McCall. If there’s a sequel, I hope they put Mickey back on the team.

The movie took the top spot at the weekend box office with $35 million, and ends with McCall creating the whole “If you don’t know where to turn…” business model on his computer. So we’ll see if they turn it into a franchise. I’ve heard rumors that a sequel is already in development and will likely be green lit within a few month.

As for the story, Robert McCall is a retired secret agent who’s trying to live a quiet life in Boston, working at a Home Depot-like store and going home to a sparse apartment where everything is neat and orderly. When he meets a young prostitute named Teri (Chloe Grace Moretz) who’s under the control of Russian gangsters, McCall can’t stand idly by.

The body count is extremely high in this movie, starting with McCall immediately taking out five bad guys, which sets off a domino effect in a larger criminal network. A “problem solver” named Teddy (Marton Csokas) is sent in to kill McCall, and the whole thing culminates in a showdown at the Home Depot-like store where McCall gets the award for “best use of power tools as murder weapons.”

I know it’s not politically correct, but there’s something satisfying about someone systematically taking out all the bad guys. No muss, no fuss, they need to be gone, and McCall is the one to do it.

Add that to the re-teaming of Washington and his “Training Day” director Antoine Fuqua, and you’ve got a solid action movie that over-delivers on the promised violence and vigilante justice.

I’ll add that McCall’s co-workers at the Home Depot-like store almost seem like they’re out of the TV series. McCall just can’t stop himself from helping people. He helps one guy lose weight to get a better job. He uses his special skills to help another get her ring back after a thug steals it.

I’m disappointed that the movie didn’t incorporate more elements of the TV series, including the theme song and Mickey, but hopefully, they’ll show up in future “EQ” movies. I don’t recall McCall’s Sherlock Holmes-like eye for detail and time frames in the TV series, but I like it, not to mention the awesome slo-mo action and walking-away-from-explosion scenes.

With his distinctive voice and stature, Washington is perfect as McCall, and you can always count on some buzz-worthy dialogue from the actor. “Old man’s gotta be the old man, fish has gotta be the fish,” he explains to Teri about “The Old Man and the Sea.” “Gotta be who you are in this world.” Yup.

Sex/Nudity: A teen prostitute wears sexy clothes and gets into a car with a man, presumably to have sex with him (though prostitution is never mentioned by name, only alluded to). Another prostitute is in a similar scene, and other “girls” are mentioned. A man is shown taking a shower, but nothing sensitive is shown.

Violence/Gore: The body count is extremely high, with the main character killing lots of bad guys with various weapons, including knives, guns, a corkscrew, a shot glass, barbed wire and assorted power tools. Lots of blood is shown. A teen prostitute is beaten and spends time in a hospital. A man is bashed with an ash tray, and a woman is killed with a choke hold. A man threatens another man by locking him in a car with the exhaust pumped into the car. Bloody crime scene photos are shown. A man cauterizes his own wound with a heated doorknob.

Drugs/Alcohol: Russian gangsters drink vodka, and a shot glass is used as a weapon.

Which Kids Will Like It? Kids 17 and older who like Denzel Washington movies or action movies with a high body count.

Will Grownups Like It? “The Equalizer” is a solid action movie, but doesn’t capture the feel of the original TV show.