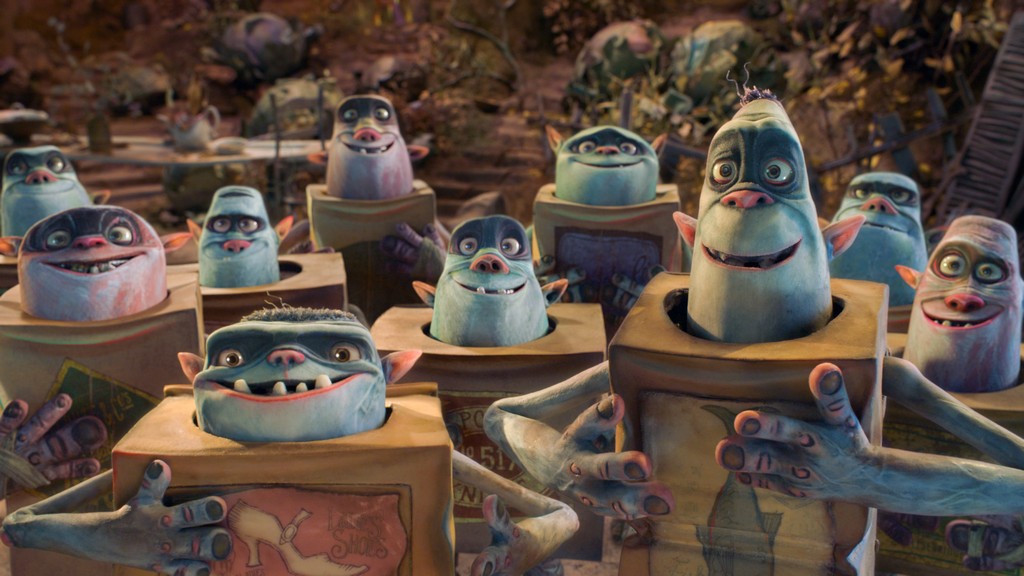 SYNOPSIS: A young orphaned boy raised by underground cave-dwelling trash collectors tries to save his adopted family from an evil exterminator. Will he succeed? 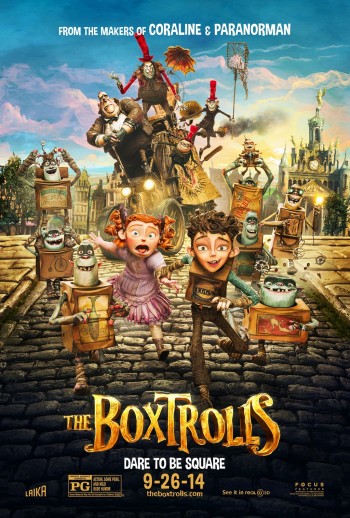 REVIEW: Angry villagers! Evil Henchmen! Weird transvestites! A boy lowered into a fiery cage of death! A cheese allergy gone horribly wrong! If this movie doesn’t give your little ones nightmares, nothing will! Ok, “The Boxtrolls” isn’t all bad. Some of it is quirky and cute. Some of it is downright terrifying. Let’s break it down…

Based on the children’s novel ‘Here Be Monsters’ by Alan Snow, the story takes place in the Dickensian village of Cheesebridge, where the wealthy residents wear white hats and obsess over exotic cheeses. They also plot to kill the boxtrolls, quirky little creatures who live beneath the city in a lair cluttered with all the interesting junk they scavenge from streets at night.

The people think the boxtrolls eat babies and steal children, carting them off to their underground cavern filled with “mountains of bones and rivers of blood.” The boxtrolls’ reputation was secured one night when they carried off a crying baby, but of course, there’s always more to the story — this one involving the evil Archibald Snatcher (voiced by Ben Kingsley).

All Snatcher wants is one of those white hats the rich people wear when they meet to eat assorted cheeses — like the one worn by snobby Lord Portley-Rind (Jared Harris), who ignores his young daughter Winnie (Elle Fanning) in favor of cheese. Portley-Rind tells Snatcher that if he exterminates the boxtrolls, he too can wear a white hat and be part of the coveted cheese club.

Fast forward ten years and the boxtrolls numbers are dwindling, much to the chagrin of Eggs (Isaac Hempstead Wright), the baby who was “eaten” by the boxtrolls long ago. Turns out, they’ve been lovingly raising him as their own. They’re not baby-eaters, after all. They’re peaceful creatures who love to tinker and create things with their nightly scavenger sessions.

With the help of Winnie, Eggs is determined to put a stop to Snatcher’s boxtroll extermination, before the last of his adopted family is gone.

“The Boxtrolls” starts off in an adorable way. The filmmakers and animators take their time creating a detailed village with cobblestone streets bathed in the foggy light of streetlamps. The stop-motion animation is nothing short of stunning. The filmmakers have said that each second of the finished movie took four days to film, with real people (not computers) painstakingly creating tiny movements to move the action forward.

While the story, based on the novel “Here Be Monsters!” by Alan Snow, isn’t quite as creepy as the supernatural worlds of “Coraline” and “ParaNorman” (the filmmakers’ previous movies), it’s still rife with peril and danger, with major characters seemingly killed off along the way.

Then there’s the evil Snatcher, whose pursuit of the one thing he thinks will give him respect and power turns him into a grotesque monster. Yep, he has a cheese allergy, which can only be remedied by having leeches thrown all over him to — ack — reduce the swelling. I was seriously cringing during some scenes.

In short, the boxtrolls are not the monsters here, the people are. The boxtrolls are, in fact, cheerful and charming, meeting their challenges with good humor and grace. Well, they do eat bugs. But the bugs are colorful, so there’s that.

There are a few messages here: Public opinion is not always right. Don’t go along with the crowd. Be proud of who you are. And everything is not always as it seems, so get the facts before taking action. There’s also a sub-story about fathers being absent in their children’s lives.

Should your kids see “The Boxtrolls”? Some scenes are too disturbing for very young kids, including a risqué transvestite (sort of) singer. I’m going with ages eight and older on this one.

Sex/Nudity: Flirty street performer Madame Frou Frou wears a low-cut gown, fishnet stockings and lots of makeup (though she isn’t what she appears to be). Eggs kisses (and licks!) ladies’ hands at a party and scratches his “privates” in public, causing Winnie to scold him for doing so. The boxtrolls’ naked behinds (which look like human backsides) are shown in one scene.

Violence/Gore: Quite a bit of peril and violence for a kids’ movie. The movie opens on a stormy night with a crying baby carried away by boxtrolls. Snatcher is evil, creepy and unhinged, as he gleefully captures boxtrolls with his terrifying extermination machine, causing chaos in the streets. Boxtrolls are captured and presumed dead; in one scene it appears they’ve been smashed flat. A character has a food allergy that causes him to swell up and become angry. A character explodes into a cheesy haze. Winnie is somewhat macabre, dwelling on all the things the boxtrolls will do to her if she’s caught. Lots of chase scenes and peril. A character nearly meets his death by being lowered into a white-hot fire. Madame Frou Frou sings a song about killing boxtrolls. A character throws up some cheese and eats it again.

Profanity: Infrequent use of “Oh my God” and insults like “brat.” “Mother of sausages” is used as an exclamation.

Which Kids Will Like It? Kids 8 and older who liked “Coraline” and “ParaNorman” and don’t mind some artistic edginess in their movies.

Will Grownups Like It? “The Boxtrolls” ranges between disturbing, quirky and cute. It’s not for kids younger than 8.