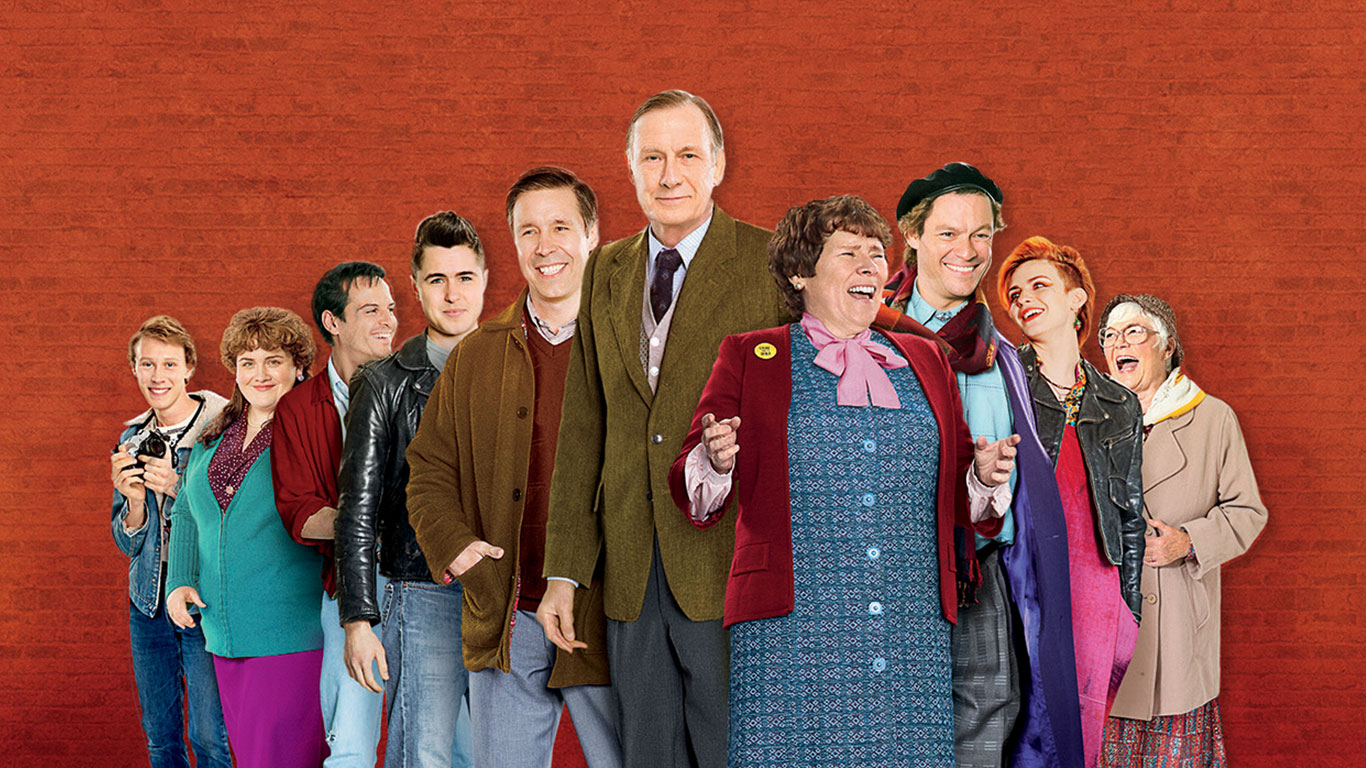 If you feel helpless as you learn about all of the horrors going on in the world, “Pride,” a film that opens Friday, Sept. 26, 2014, is the antidote. It will lift your spirits to the heavens.

Based on a true story, the British movie stars Bill Nighy, Imelda Staunton, Dominic West, and a large cast of actors all working at the top of their game. Meanwhile, director Matthew Warchus and screenwriter Stephen Beresford somehow manage to tug at our heartstrings without falling into TV movie traps.

I was unaware of the events depicted in “Pride,” although I knew that coal pits in the 1980’s were closed in many towns within the U.K., effectively causing those towns to fall apart.

In 1984, a young gay man in London named Mark Ashton noticed the similarities between how the gay community had been treated by authorities and how the miners were being treated. He gathered a small group of friends that named themselves “LGSM” – Lesbians & Gays Support the Miners – and started raising money to send to a needy mining community.

The problem at first was that they couldn’t find a group of miners that was willing to take money from homosexuals, no matter how badly the funds were needed. Finally, a community in Wales agreed to accept the money, and an unlikely alliance between the groups occurred – not without a rocky start, however.

What took place is inspiring in the true sense of the word, as well as touching, funny, and endlessly entertaining on screen. I don’t know how many of the details in the film are true to the story, but Beresford claims that 80% of it is accurate. They even shot some of the scenes in the Welsh village where many of the original events took place. What’s more, each character is finely crafted so that you have a terrific ensemble of people you really want to watch and know.

Of course, not everyone supported the efforts of LGSM, so there’s plenty of conflict in the movie. But the overriding theme of the story is connection, acceptance, and love. And it’s all presented in a way that doesn’t come across as corny or preachy.

Many of the real people who lived it are still around, including Dominic West’s character, Jonathan, who was one of the first people in the U.K. to contract HIV. He’s now 65 years old. West is so much fun to watch in this movie. Even though you’d never know it from his work on “The Wire,” he has Jonathan’s raucousness in his wheelhouse. Remember him in “Rock Star”?

“Pride” also depicts the 80’s accurately. It made me miss the clothes, the music, and the spirit of that decade, but of course, not the part where AIDS robbed me of a lot of people I loved. Sadly, the real Mark Ashton died of AIDS at the age of 26, just two years after the events depicted in the movie, and Staunton’s character, Hefina, passed away the first day of filming. At least she lived long enough to know that the story was being told.

As for the film’s actors, you can never go wrong with the likes of Staunton and Nighy, two of Britain’s best.

Special shout outs must also be given to young George MacKay as Joe, Andrew Scott as Gethin, Joseph Gilgun as Mike, Faye Marsay as Steph, Paddy Considine as Dai, Jessica Gunning as Sian, Nia Gwynne as Gail, Lisa Palfrey as Maureen (one of the film’s key homophobic antagonists), Karina Fernandez as Stella, the hilarious Menna Trussler as Gwen, and especially Ben Schnetzer (“The Book Thief”) as Mark Ashton.

Schnetzer anchors the film with a presence so substantial and multi-dimensional that he caused me to mourn a man I never knew who has been gone for nearly 30 years. The people who knew Ashton have reportedly called Schnetzer’s portrayal “uncanny.” I was also surprised to learn that the actor is American (his accent is spot-on), and his parents are long-time soap opera actors. Watch for this guy. I hope he gets a lot of roles so that I can see more of his work.

If “Pride” is playing in your area this weekend, make arrangements to get to the theater. You’ll thank me.