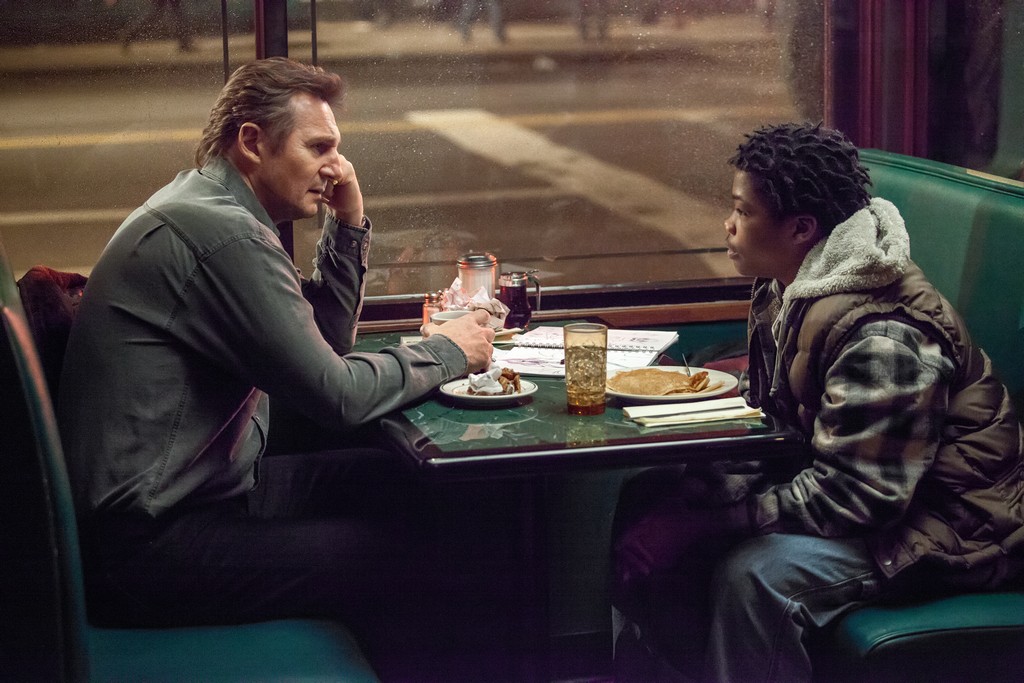 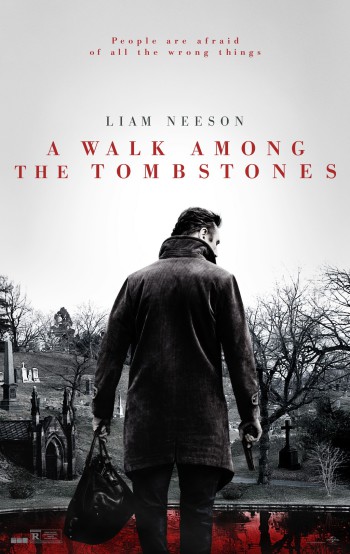 REVIEW: “A Walk Among the Tombstones” is based on a series of “Matthew Scudder” detective novels by Lawrence Block. If you go to his website, you’ll see he’s an amazingly prolific writer, having written many series-based and stand-alone novels, some of them in various pen names. Many of his novels, short stories and screenplays have been adapted for film and TV, and in 1986, Jeff Bridges played the character of Matthew Scudder in “8 Million Ways to Die.”

“A Walk Among the Tombstones” has a few problems, but this is the sort of old-fashioned, hard-boiled detective story you can really sink your teeth into. The movie begins eight years prior, when Scudder (Liam Neeson) was a cop with the NYPD — an alcoholic cop who was drunk during a robbery. The tragic outcome of the pursuit and shooting changed him forever.

Fast-forward to 1999, and Scudder is now sober, in Alcoholics Anonymous and working as an unlicensed private detective in exchange for “gifts” his clients give him. When a drug dealer (Dan Stevens) hires him to find the men who kidnapped his wife — he paid the ransom, but they killed her anyway — Scudder hits the streets and starts looking for clues, with the help of a homeless kid and budding P.I. named T.J. (Brian “Astro” Bradley).

Scudder soon discovers that the kidnappers have a specific M.O. — targeting victims with lots of cash operating outside the law (i.e. drug dealers) who won’t call the cops. When they kidnap a 14-year-old girl, Scudder is up against the clock to find her before she ends up dead.

Along with the impressive book credentials of Lawrence Block, director Scott Frank wrote the screenplay for this film, and he has a long history of adapting crime novels and thrillers by Elmore Leonard, Philip K. Dick, and James Lee Burke for the screen. He also wrote and directed 2007’s “The Lookout,” a crime drama starring Joseph Gordon-Levitt and Jeff Daniels.

The whole patina of “A Walk Among the Tombstones” is grim and gritty, with settings in dusky coffee shops and gloomy cemeteries beneath gray skies. That’s a bonus in this type of movie, but also a deterrent after the first hour or so of watching depressing people live their depressing lives. So yeah, the movie went on too long and could have been pared down a bit — even though at 113 minutes, it’s not overly long to begin with.

Liam Neeson delivers his usual brooding character skillfully, but I have to mention a couple of standout performances. Brian “Astro” Bradley, who first rose to fame on “The X Factor” and can also be seen in Fox’s new series, “Red Band Society,” plays the character of homeless T.J. with heartfelt emotion. You really feel for this kid, and can see that he and Scudder are both in need of some human connections.

Ólafur Darri Ólafsson is my other favorite actor here. As cemetery groundskeeper James Loogan, he seems like he belongs in a small indie movie that everyone’s just discovering on the film festival circuit. You might have seen him in an episode of HBO’s “True Detective” or Cinemax’s “Banshee Origins.” He also played the helicopter pilot in “The Secret Life of Walter Mitty” (another standout performance), as well as many films over the past decade, including many Icelandic roles (he’s lived in Iceland for most of his life). Good grief, he’s good. Someone needs to get this guy his own series stat.

As much as I abhor movies and TV shows that victimize women, “Tombstone” is a fairly solid crime drama. Because the movie takes place on the eve of Y2K, it’s interesting to see the references to the impending doom and computer virus, which many feared would be the end of us. It wasn’t. We survived. Just like Matt Scudder does in this movie.

Violence/Gore: The R-rating is on target here. Violence includes gunfire, fights, and strangling by a wire around the neck. Lots of blood is shown. A child is accidentally shot during a shoot-out. A boy is beaten up. A woman is shown gagged during the opening credits, and it appears she’s being raped. Kidnappers abduct two women and a 14-year-old girl, and threaten to cut off a woman’s breasts, forcing her to choose. Women are chopped into pieces and put into plastic bags. A girl’s fingers are cut off. A character jumps off the roof of a building to his death. References to violent porn videos.

Drugs/Alcohol: A character is a recovering alcoholic who attends AA meetings (a flashback shows him drinking shots of something alcoholic). The story revolves around drug dealers.  Characters smoke cigarettes.

Which Kids Will Like It? Kids 17 and older who like crime dramas or Liam Neeson movies. There also might be a few “Astro” fans out there.

Will Grownups Like It? It’s overly long and, as such, not very suspenseful, but still a solid entry in the crime drama genre.