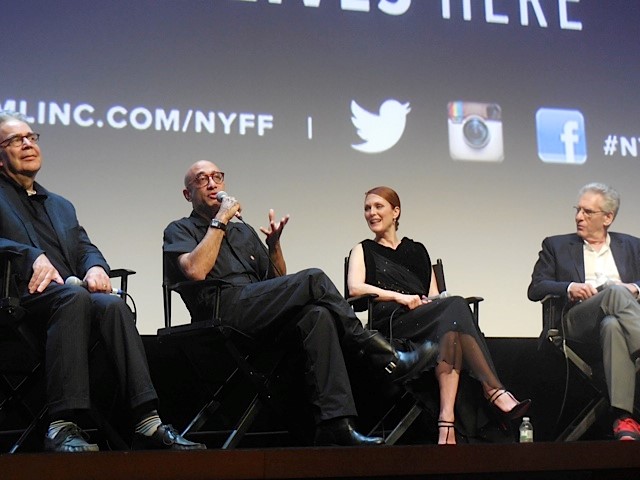 Julianne Moore sparkled Saturday evening in the sequined gown she wore on the red carpet at the New York Film Festival screening of David Cronenberg’s twisty, pitch-black Hollywood satire, “Maps to the Stars.” (The film also stars John Cusack, Mia Wasikowska, Olivia Williams, Evan Bird and Robert Pattinson, who were not at the screening.)

The movie is set in tinseltown, where all the characters – all loathsome – revel in their narcissism. Moore received best actress honors at Cannes for the role as the monstrous fading actress Havana, who tries to revive her career by recreating the movie role originated by her famous actress mother decades earlier. It’s a gutsy performance by the usually classy actress, who has an extended gross out scene while she sits on the toilet.

Shore told me this is the 15th movie he’s made with the “Eastern Promises” director, who he has worked with for 35 years, so they have a “very intuitive type of relationship.” He added, “I tried to recreate Bruce’s (Wagner) version of Los Angeles. It’s unlike anybody else’s reality of what Los Angeles is, so I tried to find the essence of Bruce’s world through David’s eyes through my music.”

Wagner, a very cool guy with a smooth head, always wears a jumpsuit, which is a kind of uniform for the writer. He insisted he was a not writing a chronicle of Los Angeles, although he’s lived there all his life and started reading Variety when he was 9.

“I don’t draw on my experience,” he told me. “It all comes from some deep, unconscious place. Some things on the very surface of the movie are things I actually heard or encountered, but for the most part, I don’t know any mutilated schizophrenic girls who try to burn houses down. I’ve met all kinds of actors but Julianne’s character is a complete invention.” He added, “The movie is not really about Hollywood. It’s a family melodrama.”

Julianne Moore told me she didn’t draw her character as fading actress Havana from any real life people. “What was most interesting to me about her was trying to create her arch,” she said. “It was really the language. The language gives you such incredible information. Bruce’s (Wagner) writing is so very, very precise and so funny, so I kind of took it all from that and thought about the worse most terrible, terrible, inner child you could imagine” and “she would behave like Havana.”

Following the screening there was a Q&A, where the director insisted the film was a comedy and not a continuation of the bloody kind of fare that got him the nickname “baron of blood.” “I’ve segued into comedy and this is it. This is as funny as I can be,” he said.

Someone asked, what was the joke in the movie that still cracked him up in the editing room even if he heard it a hundred times?

Wagner laughed and replied, referencing a scene in the film wheres Havana’s mother says to her in a vision, when she asks, “You know what hell is? It’s a world without narcotics.”

“That’s because Bruce has said that many times,” Cronenberg joked.

All photos taken by and published courtesy of Paula Schwartz.