Australian filmmaker Genevieve Bailey’s “I Am Eleven” is a delightful documentary that gives us a glimpse of 11-year-olds around the world. She chose 11 because it’s the age she remembers being happiest.

While the film is largely superficial in that we don’t get an in-depth picture of these children, what Bailey accomplishes is a film that is optimistic and appropriate for … well, 11-year-olds. (It’s rated G.) There’s something to be said for that because it will give children an idea of what it’s like to live in other parts of the world.

The kids who are profiled reside in places like Thailand, India, Britain, Australia, the U.S., South Korea, China, Morocco, Japan, France, and the Czech Republic. Regrettably, Bailey didn’t manage to get to South America or Africa, which would have made the film a much richer experience. 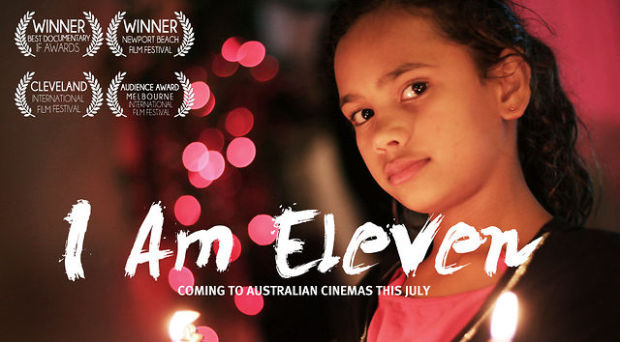 She asks the kids questions about bullying, love, war, and religion, and they answer with, appropriately, 11-year-old thoughts. This, of course, means that we don’t get any brilliant insights, but we do learn what children on the planet are thinking and how they are interpreting the actions of adults.

There is an aboriginal girl in Australia, two children in Thailand who work with elephants (one Thai and one an expat), a boy who is a boxer, an Iraqi rapper in Sweden, a boy in Britain with some learning disabilities, a young poetess, and a particularly thoughtful and empathetic boy in the south of France.

Bailey returns to speak to some of the kids after they have turned 12, 13, 14, or 15, but this section of the film is so brief that it doesn’t add a great deal.

Nevertheless, every single child is adorable and sweet, and it makes you wonder what happens between 11 and adulthood that causes the world to go so wrong.

“I Am Eleven” captures universal childhood innocence, and while it shows us that lifestyles are very different throughout the world depending on culture and level of wealth, it shows us even more how much we are the same.