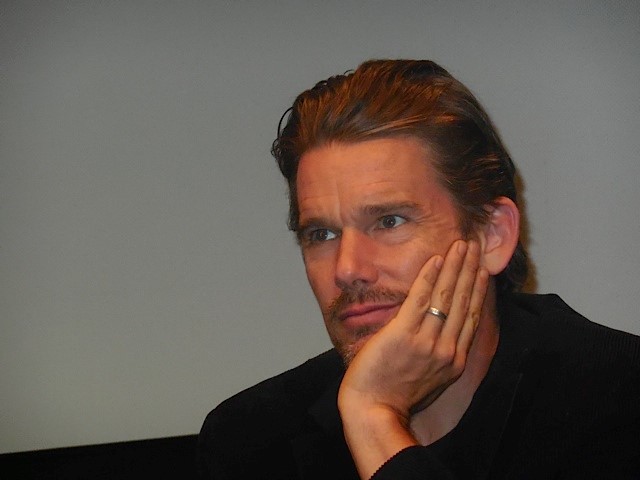 All photos by Paula Schwartz.

The journalists at the New York Film Festival press screenings are a tough crowd. They can be snarky. They often disagree wildly. One journo walked out of “Goodbye to Language,” the latest film by the great director Jean-Luc Godard, grumbling, “If that was his first film, that would have been his last.” Another gushed that the 83-year-old maestro’s movie was  “mesmerizing and genius.”

There was no fighting in the aisles over Ethan Hawke’s first documentary, “Seymour: An Introduction,” about 87-year-old classical pianist and composer Seymour Bernstein. Everyone agreed it was terrific.

Bernstein was once a critically acclaimed pianist who retired from the stage at age 50 because of stage fright and career anxieties. The sprightly musician, who is also a winning raconteur, has found his vocation and fulfillment as a mentor to other pianists.

Bernstein’s running commentary and meditation on the art and craft of music and performance dovetails with the director’s quest for meaning as an artist. Seymour’s wise and witty comments and stories about his life and music are relatable to anyone who is passionate about anything.

Another major theme in the film is the artist’s struggle to reconcile the artistic impulse with the pressures of making money. Bernstein, who lives a monk-like existence in a studio apartment, gave up a lucrative concert career for a simple lifestyle that revolves around music and teaching. Hawke’s life is more complicated. Hawke has a family to support. He alternates making indie movies – he is in arguably the best movie of the year so far, Richard Linklater’s “Boyhood” – with lucrative action thrillers like “The Purge.” As an actor he struggles with artistic integrity, and last year when the actor starred in “Macbeth,” Bernstein helped him deal with his performance anxieties.

After the screening – while journalists waited for Hawke, who was stuck in traffic – Seymour had no trouble entertaining the crowd. He described how he and Hawke met; friends told him they wanted him to meet Ethan Hawke. His reaction: “Who’s that? I don’t go to the movies that often, so I Googled him.” Then he saw Hawke’s extensive filmography, and his reaction became, “Oh my God!”

Over their dinner, Seymour told Hawke about his stage fright, while Hawke confided he also had some of the same issues.

“I feel like, part of the reason I made the documentary was simply to spend more time with Seymour,” Hawke explained. “I wanted to explore more thoroughly with him the idea that not only was it not something to be ashamed of, but it’s quite possibly something to be proud of, that you’re opening yourself up, that you’re putting yourself out there, and that any sane person who is serious and values what they do might have feelings of inadequacy.”

Hawke added that Bernstein was an easy subject to put on screen. “He speaks in complete sentences, in complete paragraphs with semi colons and the appropriate punctuation, so filming him and cutting it together, that part of it, I found was not time consuming. What was time consuming was thinking about what the documentary should be, how to do it and finding the time.”

Hawke’s wife, one of the film’s producers, persuaded him to direct the film, which took 2 ½ years, with shoots a day here or there, but not every day. “I never wanted to make a documentary,” Hawke explained. “This came to me.”

Hawke has been attending press conferences since he was 18, but making the festival circuit with this documentary was different. “This is the first time I came out of Toronto and felt like I had been on a spiritual retreat. You find yourself talking about these big subject matters. It’s been rewarding by the doing of it.”

In the end, Hawke said, the documentary was his search for answers.

“I was looking for some grand secret. When you’re really struggling with something you think the answer is going to be you need to go to Arizona and take peyote and jump over the moon and turn around three times and find a magic salt container and take it to your place of birth and pee in the river and then you’re going to feel better. Instead, it’s well, you could try acting, which is what I’ve been doing since I was 13,” he said. “All the tools you need are usually within grasp.”

“Seymour” screens at the New York Film Festival Saturday, Sept. 27 at noon and Monday, Sept. 29 at 9 pm. Check out this great interview the duo did with David Poland at the Toronto Film Festival 2014.