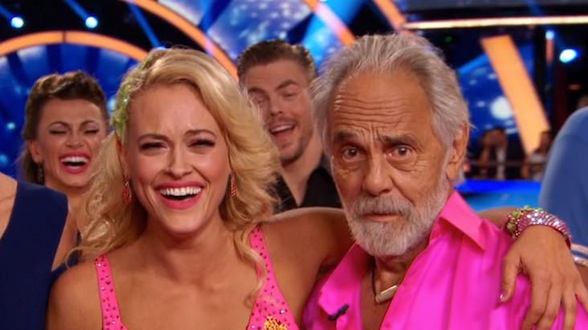 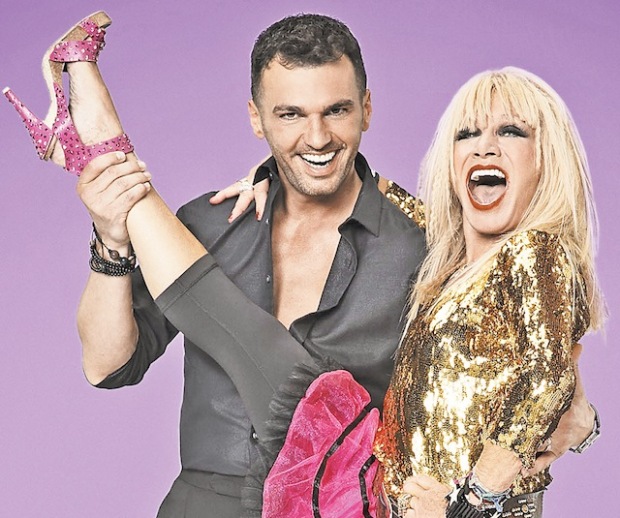 “Dancing with the Stars” is back, dance fans, and this week, the senior dancers are holding court! Some of last week’s favorites fall a little flat (Alfonso and Sadie), while the older dancers really step up!

But first, everyone is dancing to their favorite songs with My Jam Monday—including the judges! It’s fun to see them cut loose. And by “them,” I mostly mean Len! So great to see him dancing and having fun. And it doesn’t surprise me at all to learn that Bruno’s jam is Born This Way, even though he doesn’t appear for a while after they start the song. Did he miss his cue?

The show plays a bit with the format tonight by finally introducing something I’ve wanted them to do for years: They’re finally showing replays of the routine during the judges’ comments. That’s one of the best things about “So You Think You Can Dance” and though the clips here seem a little random and not necessarily related to what the judges are talking about, it’s still a step in the right direction.

Janel and Val’s Foxtrot: I agree with Julianne, it’s not the most traditional fox trot, but I loved it too. I confess, I love the song, but they did a really nice job with it. The routine is clean, sweet, her arms are fantastic, and there’s quite a bit of content in there. I also love the romance of the masquerade setting. It seems to reference the show Janel is currently performing in Los Angeles, For the Record: BAZ.

Lea and Artem’s Jive: I’m definitely biased about Lea, but she did great! With her ballet background, it wasn’t surprising that she’d do well with last week’s fox trot, but who knew she had it in her for a jive! Great energy, great dress! It’s quick and clean, and she’s having a blast. It also helps that they’re actually dancing to a song that’s meant to be a jive (or swing). That’s increasingly rare on this show. Adorable Lea gets the highest score of the night, too.

Betsey and Tony’s Fox Trot: So much better. As much as I enjoy this song (except this singer is not great), it’s not a fox trot, but Betsey dances very cleanly. I often prefer pure, simple, dancing for dance’s sake over complicated concepts and props, and here’s a perfect example. She’s lovely and incredibly flexible, and at 72? I hope I’m still dancing at 72. I do feel a little awkward about all the comments saying how beautiful she looks. She does look beautiful, but there’s definitely an undertone of “compared to how you looked before.”

Tommy and Peta’s Salsa: This is terrific. Tommy did well last week too, and he’s keeping with it. I love that he went to salsa clubs when he was younger, and he’s still dancing at 76. He’s great, and doing more dancing here than Antonio did in his rumba (though of course that’s a different dance). He’s clearly having a ball, too.

Jonathan and Allison’s Cha-cha: I like this a lot, but Allison still outshines Jonathan by miles. I had to watch this routine three times: the second time to see what the judges meant about content (I’ll get back to that in a moment), and the third to tune out Allison and focus on Jonathan. I definitely think it’s a “Cassie” problem: Allison is too much of a star. She’s too dynamic. She doesn’t belong in the chorus, and I almost think she needs to tone it down, just a little. Or Jonathan needs to really step up. Not to say that he’s bad, because he’s really very good! She’s just tremendous.

Regarding content: at first I didn’t understand what the judges meant. When I say there isn’t enough content, it’s usually because the choreographers are playing too much with theme or props, or the pre- and post-dance set-up. This was not the case here at all. There’s actually plenty of content in this routine, it’s just not cha-cha content. And perhaps it’s because Allison is a contemporary dancer first, not a ballroom dancer. Still, what they did was great.

The Rest:
Randy and Karina’s Cha-cha: He’s still awkward, but getting better. I’m not sure if it’s her choreography or his approach (both, I think), but he needs to curb that sliding-his-hands-all-over-her-body stuff.

Michael and Emma’s Samba: He’s a cut-up, and I appreciate that he goes for it and isn’t afraid to look foolish, but he also grosses me out. He really needs to drop the horn doggie routine. Emma deserves better.

Tavis and Sharna’s Cha-cha: It’s clear he didn’t practice enough because he looks nervous and is concentrating too much, but it gets better as it goes on. He needs to relax his face.

Alfonso and Witney’s Samba: He’s a great dancer, and Witney’s good at giving her partners material they’re comfortable with and that show what they can do (regardless of the ridiculous outfit she’s wearing). But that’s what the judges are complaining about tonight. But what should they expect when dancing samba to a hip-hop song?

Bethany and Derek’s Fox trot: I didn’t see why it was necessary for her to stand on the instrument, and I wanted a little more content. But I like the song, the routine is cute, and she dances well.

Antonio and Cheryl’s Rumba: To me, it looks messy, and Cheryl’s definitely dancing around him, so I’m not sure what the judges are raving about.

Sadie and Mark’s Country-style Jazz: I agree with Len: something about the jazz and country mix didn’t quite gel, and the choreography is a little too simplistic. She’s a true performer though.

So what do you think, dance fans? Who are your favorites tonight? Do you agree that the older dancers ruled the roost? Are you excited for Movie Night next week? Will Jonathan and Lea be forced to do something relating to their movies (“Mean Girls” and “Back to the Future” respectively)? Let’s hope they won’t all be Disney-owned movies.