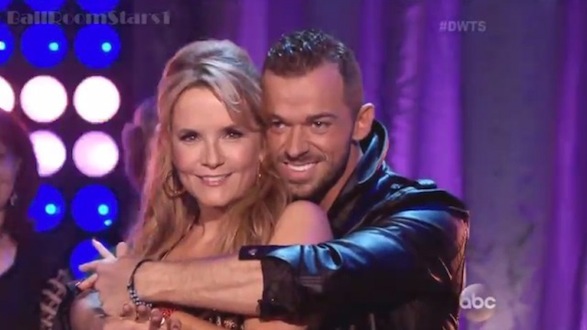 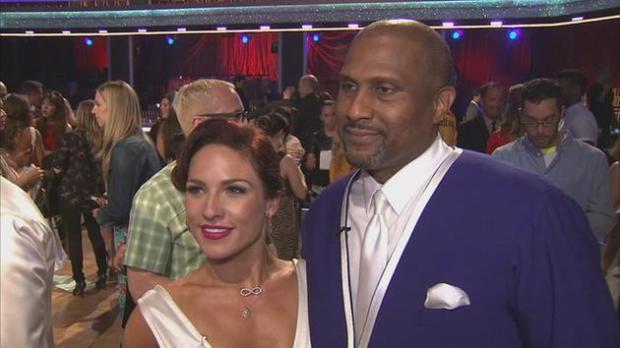 Hey dance fans, the “Dancing with the Stars” week 2 results are in, and while I’m slightly disappointed, it’s somehow not surprising. In the meantime though, we’re treated to the usual bevy of dance numbers and film segments, including a DWTS take on a couple of recent viral videos.

Troupe members Jenna and Lyndsey take their turn at choreographing the opening number, but the results don’t look terribly different from what we’ve seen before: more strutting and posing.

Nico and Vinz perform their hit Am I Wrong, while Val, Peta, and Karina provide some really nice dance accompaniment. We also get a special performance by a scantily clad Julianne Hough, whose private parts are apparently on fire. (Good thing they don’t hide nakedness that way on “Naked & Afraid”). She dances with the boys to another song used by “So You Think You Can Dance” this summer, just like Allison and Jonathan’s cha-cha last night (to Ed Sheeran’s Sing), this time using OneRepublic’s Love Runs Out. The two shows certainly seem to keep up with each other. Before Julianne’s number, the producers show us a bit of rehearsal footage where Julianne takes a really nasty spill after a particularly complicated lift, so I wonder if they’d take it out. Kudos to them for leaving the lift in, but it’s still very rough.

Hoping to recreate its own viral video, we see the A to Z of “Dancing with the Stars,” a response to the A to Z of Dance making its rounds on the Internet. (I’m also very slowly working on a response version). DWTS also recreates Sia’s stunning Chandelier video, with the singer live in the studio—though she decides not to detract from the dancing by standing with her back to the audience. While it’s odd not to see her perform, I also really appreciate that she wants the dancing to stand on its own. And it sure does. Allison Holker works with the dancer from the video, “Dance Moms” star Maddie Ziegler. Both are powerhouse dancers, but Allison has a thrust and sharpness that can’t be replicated. Speaking of “replicated,” the quirky movement has a very futuristic, Leeloo Dallas, “Blade Runner” kind of quality, but it’s an emotional, extraordinary number.

We also see a ridiculous trio of movie previews in preparation for next week’s Movie Night. While funny, the idea of Betsey and Tony recreating the pottery scene from “Ghost” is disconcerting, and they don’t even wait until next week to make a reference to “Back to the Future.” I wonder if Lea’s tired of doing that bit.

Throughout the night, Tom Bergeron and Erin Andrews reveal that Michael and Emma, Sadie and Mark, and Tavis and Sharna are in jeopardy. I think we all know that Sadie and Mark aren’t going anywhere, despite the trouble they might have had last night (we love Mark’s “David Brent of Dancing” audition video too). I thought (hoped) that Michael would be going, but instead it’s Tavis. Perhaps the audience thinks he’s not taking the competition seriously enough since he didn’t have enough time to really practice last week. While a small part of me agrees, I’m sad to see him go.

So what do you think, dance fans? Did the right person leave? What did you think of the performances tonight? Will you miss the results show next week? Chime in in the comments.