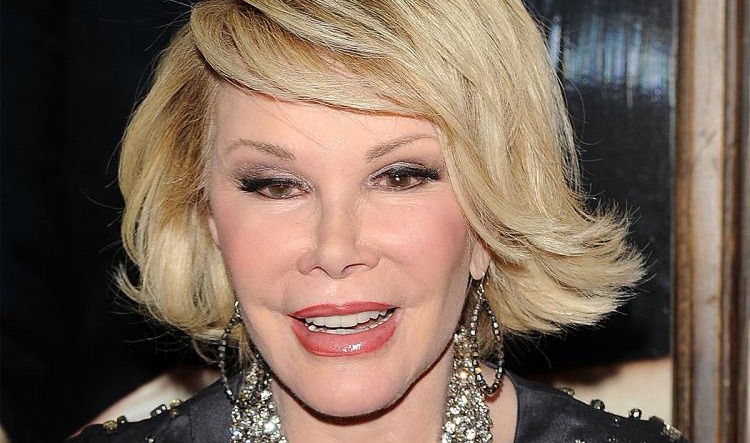 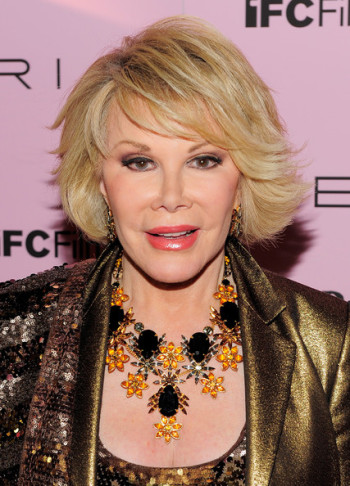 Melissa Rivers announced her mother’s death today at age 81 on the website, joanrivers.com:

It is with great sadness that I announce the death of my mother, Joan Rivers. She passed peacefully at 1:17 p.m. surrounded by family and close friends. My son and I would like to thank the doctors, nurses, and staff of Mount Sinai Hospital for the amazing care they provided for my mother.

Cooper and I have found ourselves humbled by the outpouring of love, support, and prayers we have received from around the world. They have been heard and appreciated.

My mother’s greatest joy in life was to make people laugh. Although that is difficult to do right now, I know her final wish would be that we return to laughing soon.

Last night at the glittery premiere of “Boardwalk Empire,” a tabloid reporter who’d been covering the Joan Rivers story, told me that the comic had been moved from intensive care because there was no hope and essentially the family was now conducting a deathwatch. This was sad news to me, who hoped the move to a private room signaled good news. This reporter also hinted there was a medical investigation into malfeasance going on surrounding the circumstances of Rivers’ hospitalization after the comic went into cardiac arrest following an outpatient procedure.

I had many happy encounters over the years with the legendary comic/sharp-tongued commentator at movie premieres, Broadway openings and special events in Manhattan, where she was a fixture. Rivers was polite and gracious, always particularly nice to women reporters just doing their job. Sure she poked fun at boldface names, but she was just as critical about herself. Always mindful of her image, I would see her at premieres where she orchestrated the photo shots and instructed photographers not to get too close and always shoot her good side. They always obeyed.

Lately, with her hawking merchandise and getting backlash from political comments she made off the cuff, people may have forgotten what a trailblazer she was for female comics for more than 50 years. Rivers was the first woman to host a television talk show and got a lot of grief from men like Johnny Carson who resented her success. Her accomplishment is even more impressive when you consider no woman is still at the helm of a network late-night talk show.

Rivers kept reinventing herself, even after the suicide of her husband, who mismanaged her finances and left her in dire straits. She was always acerbic but never bitter. And if you haven’t seen it yet, watch the 2010 critically acclaimed, documentary “Joan Rivers: A Piece of Work,” which gives a look at how hard working and resilient she was.

The portrait of her in the documentary is very much the person I saw covering the New York nightlife for the New York Times. Often I would be covering events where no one said anything particularly interesting, especially at charity affairs attended by self-important socialites. But if I saw Joan Rivers in the crowd, I knew she would rescue me with a snappy, funny quote. She never ran out of material.

The first time I met Rivers was during intermission at the Broadway opening of “Avenue Q” a little over a decade ago. She looked chic, as she always did, and slender in a black top and pants, a turquoise scarf around her neck. Before his notorious cellphone rampage, Russell Crowe famously insulted Joan Rivers by calling her “an (expletive) old bag,” when she tried to corral him on the red carpet for her pre-awards telecast.

She took his insult in stride. ”He’s very rude to a lot of people,” she told me. ”I don’t like rudeness. I think when you’re given the gift of fame, along with that has to come manners.”

She’d also recently had cosmetic surgery and never shied away from discussing her many procedures. I asked if there is a limit to how much plastic surgery anyone should have.

”I think we should fight till we die,” she told me. “I think you’ll get a better deal. You want to look good in the casket. I want a lot of men to look and say, ‘Gee, I shouldn’t have been such a (bleep!) to her.”’

As for what she hoped audiences would come away with after seeing her perform, she told an interviewer, “My mission in life is to tell the truth and say what other people are thinking.”

Joan Rivers, dead at 81, succeeded at her goal. The well-loved comic will be missed, especially by people who knew what a compassionate, kind, funny person she was, even when the cameras weren’t around.