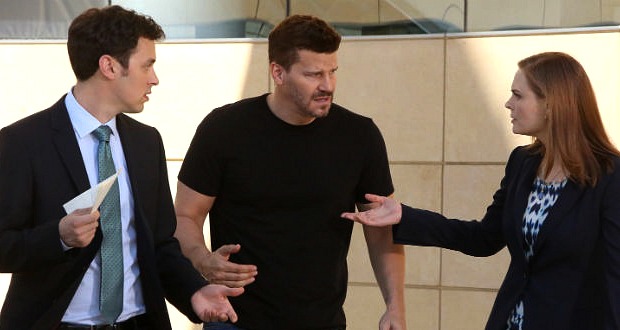 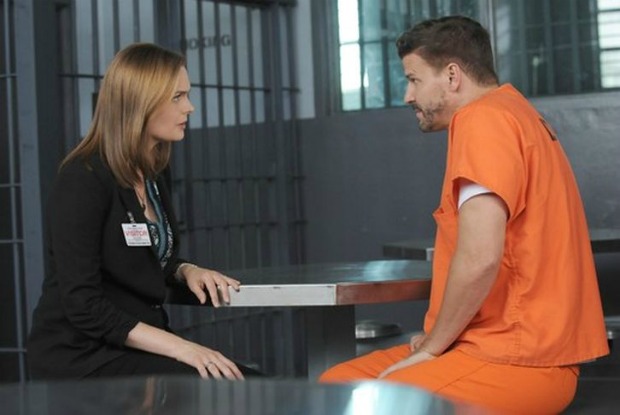 Say it isn’t so! I can’t believe they killed off our beloved Sweets! I don’t think any of us were ready for that scene. I know I wasn’t … and Daisy is back and pregnant and Booth is going to be the child’s godfather. More on this later.

The “Bones” season 10 premiere opened with Booth still in prison and the team furiously working to bust him out. Brennan’s prison visit (seeing that Booth had been beat up, and knowing he might not last much longer in there) spurred her to take things into her own hands – the Brennan way – and blackmail the federal prosecutor (who had been tangled in dirty dealings) to get his release – which worked!

Once out, Brennan takes Booth to their new home (which is beautiful!). He asked her how much she spent – funny – but knowing his manliness, she told him she spent both of their money – and a lot of his. He likes it, but wants to dive right into the case. She’s a little taken aback by his new persona – angry and no tenderness on the relationship side. His character, at least for now, is dark.

Later Brennan talks to Sweets as a “friend” at the cafe (oh, how bittersweet – Brennan, Booth and Sweets met so many times there to discuss cases and relationships) about Booth and his obsessiveness and anger regarding the conspiracy. They have a nice talk, and Brennan listens and shows how she’s opened up over the years to his “pseudo” science. Very sweet.

A new agent, James Aubrey (played by James Boyd) has been assigned to help Booth. Of course, Booth doesn’t trust him at first (Booth is not trusting many people right now), but as the show went on, Aubrey proves he is on Booth’s side. Aubrey’s character is a little quirky, and I like it. Will he be a permanent addition? We’ll see.

At the lab, Angela asks Brennan how the relationship with Booth is going. Brennan tells her there isn’t one. Angie tells Brennan to basically show Booth she wants/needs one – and she does. At home that night, she gingerly takes his shirt off (he’s hurting from his prison fight) and kisses him, and they end up on the bed – darn 8 p.m. time slot – we want to see more! At least we saw their love for each other.

The team still works relentlessly on trying to solve the big conspiracy. There are many involved, and I’m pretty sure it’s going to all come down in the next episode. I’m just wondering if Booth will stay with the FBI or go in a different direction. What do you think?

Now to our dear Sweets. Still reeling over his death, I’ve started  to think about how important his character has been to the show. He came in as a young FBI psychologist, who Booth and Brennan had no respect for, but over the years he proved his worth as a psychologist and a friend. He became like a son to them. He was the one who saw their “hidden” (although obvious) attraction to each other and tried for so long to get them to admit their feelings. He added so much to the cases and was there for all of their personal problems.

I just can’t imagine the show without him – but since Daisy is having his baby (I’m happy), we will always feel his presence, even if he isn’t physically there. RIP our dear Sweets – next week is the funeral and farewell.

This was a very intense premiere. Booth is angry, the conspiracy isn’t solved, Booth and Brennan have a new house, there’s a new agent,  Daisy is pregnant and Sweets is dead!  Wow. I’m expecting the entire season to be great.

I do wish Brennan was a little more like the Brennan of seasons 1 and 2 – she had a rawness – not so scientific – more relaxed, but still having her funny and sometimes absurd Brennan way. Do you know what I mean?

Were you shocked by the death of Sweets? Are you angry? What did you think of the season 10 premiere of “Bones”? Please let us know in the comments below.