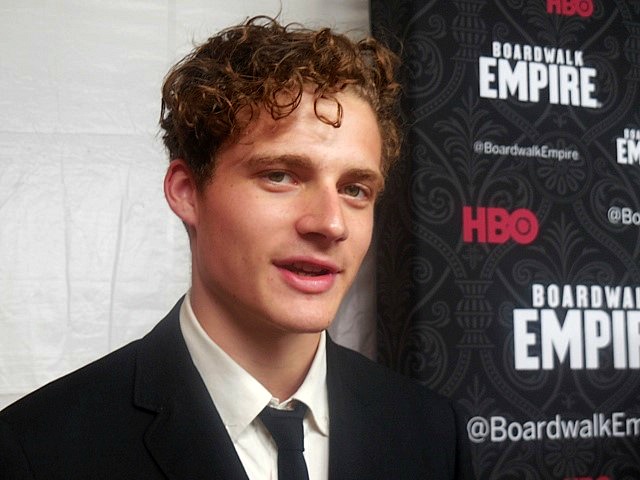 EDITORS: Buy this feature in our editorial web shop!

Be sure to catch the critically acclaimed HBO prohibition-era “Boardwalk Empire,” which begins its fifth and final season tonight.

A lavish party at Cipriani transformed into turn-of-the-century Atlantic City capped the evening. There were flappers in swimsuits and a performer in a wire skirt that held champagne glasses. The balcony was tricked up as the A.C. boardwalk where guests sauntered amid feathers, sequins, balloons and carousel centerpieces. Scattered throughout were tables with humongous portions of pastas, seafood, steak and desserts, including fist-sized shrimp, juicy sirloin and tiramisu cake dripping in berries and cream.

Buscemi, who usually plays dour characters, was all smiles at the after party where he posed for countless selfies and hugged everyone. He joked he would miss his character Nucky, a better dresser than he could ever hope to be.

On the red carpet, I asked cast members to describe their most memorable moments during shooting and tried to tease out details about the final season:

Ben Rosenfield, (Willie Thompson, Nucky Thompson’s nephew), on how his character matured during the season’s final episodes and on what’s ahead for his character:

“The end of last season sort of left him at a crossroads as to what to do with his life, and I think that this season we’ll see him, he’s chosen a path, it’s not what I think the audiences might have expected, but he’s working his way to become his own man, so that’s where he’s at now.”

Michael Stuhlbarg (Arnold Rothstein) on highlights shooting the show: “I feel like I’ve had many stand-out moments during the course of the show, but there were a couple of face offs with Steve that I really enjoyed. One, in particular, when I was talking to him about starting a war in New York when all of his business has to do with New Jersey, but I’ve had so many wonderful times, so it’s hard to choose.”

Stuhlbarg wouldn’t tell me whether he’s on the show this season, but we think his character exits, since in real life, Rothstein died in 1928 and the first episode of season five of “Boardwalk” flash forwards to 1931.

Michael Kenneth Williams, who plays Chalky White, Harlem kingpin, whose storyline was so intense it nearly stole the show away from Nucky, on what he’ll miss most about the show: “I’m going to miss the people. I’ve done some incredible work that I’m really proud of with incredible people … ‘Boardwalk’ is probably going to go down as one of the highlights of my career.”

Chalky, a fighter and a lover, is a complex character and the most interesting in the show. I asked him if he had any idea how much the show would focus on Chalky when he first took on the part.

“I had no idea that Chalky was going to take me on the ride that he did. They started him off so small, and it just grew and grew and grew. Every time I would get a script I was like, ‘You really want me to do this?’ I still consider myself a baby in this business, and the fact that they entrusted me with such an iconic character, I was really humbled.”

As for what’s ahead, Williams told me, “It’s going to be crazy dark, very explosive and sad. Everything about this show is dark this season. The Boardwalk is over. It’s over. No one goes quietly. That’s what I can tell you.”

The star of the evening was creator and executive producer Terence Winter, who summed up what we can expect from the final season as though he was on automatic pilot.

“We jump ahead to 1931. The Depression is in full swing. Prohibition is about to end. Al Capone goes to jail. Lucky Luciano rises to power. Nucky is sort of walking on razor’s edge trying to stay alive. Through all that, we also flash back to seeing Nucky as a child, so you’ll get some insight into who he is and how he became the guy we know.”

If the opening episode is any indication, ironically entitled “Golden Days for Boys and Girls,” which features Havana dancing and flashbacks of Nucky’s poverty inflicted youth, it doesn’t look like the writers have run out of steam.

As to whether he had regrets about ending the series after five seasons, Winter said, “We’re satisfied that we’re ending this series at the right time. The first rule of show business is get off the stage while people still want more. I think we’re doing that, but I think we’re also very satisfied with how it all played out. I’m comfortable we’re ending it at the right time.”

“The Wolf of Wall Street” screenwriter told what he wanted audiences to take from the show. “I want them to feel they that they were told a very exciting, poignant story that ended in a very satisfying way.”

Meanwhile, as widely reported, Winter just wrapped production of the pilot of a new show tentatively titled “The 1970’s Rock n’ Roll Project,” also for HBO, which he wrote. Martin Scorsese directs the first episode as he did for “Boardwalk.” Mick Jagger adds rock cred as an executive producer.

“It’s set in New York City in 1973 when punk, disco and hip hop were all invented,” Winter told me. “It’s very exciting. I was listening to Alice Cooper in Brooklyn. I’ll be spending a lot of time in my brain back in the 70’s, whereas I feel like I’ve been living in the 20’s for the last eight years.”

Bobby Cannavale stars as the manipulative, aggressive head of a fictitious record label. Winter agreed there were comparisons with “Boardwalk’s” Nucky Thompson. “They are volatile men in charge of a lot of very interesting people in a very interesting city.”

Before the screening, Richard Plepler, the CEO and chairman of HBO, introduced Winter, who said a few words after he thanked the “Boardwalk” cast and crew: “I am alternately very happy and very sad to welcome you all here tonight … This is so weird to be doing this for the last time, but I have an idea; next year at this time, whatever’s playing at the Ziegfeld, we’ll all meet, buy tickets and go to Cipriani’s for dinner!,” he joked about what has been an annual event for the past five years.

“It’s probably not going to be as good as the show you’re going to see tonight. In all seriousness, this entire experience has been magic.”