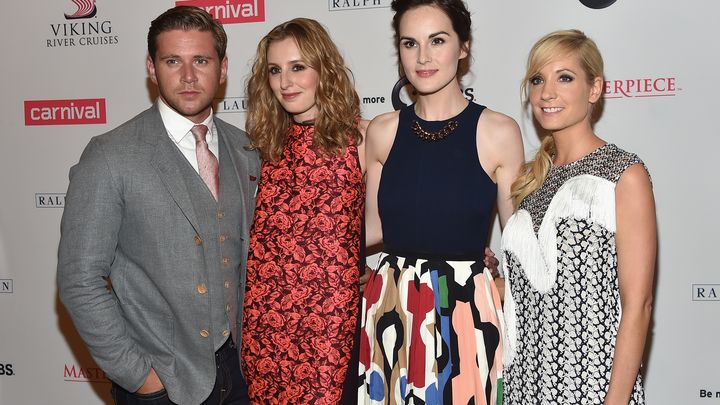 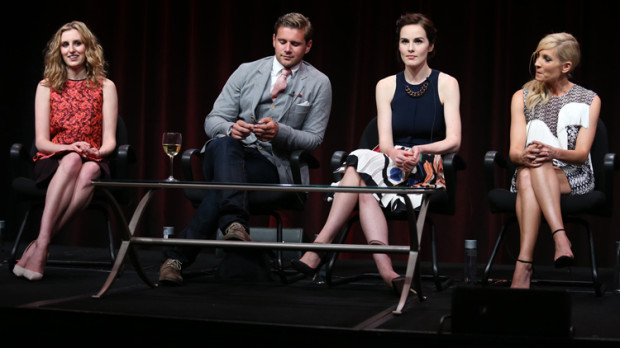 It looks like the battle for Mary’s heart rages on between Lord Gillingham (Tom Cullen) and Charles Blake (Julian Ovenden). There’s no clear winner yet, but I’m #TeamBlake on this love triangle. Are you #TeamBlake or #TeamGillingham?

Lady Edith will often visit Timothy Drewe, the tenant farmer who secretly takes in Edith’s baby to raise as his own. Her turning up on Drewe’s farm all the time is starting to look a bit suspicious. I wonder who at Downton will start to notice first?

Branson continues to try to balance his life upstairs with the Crawleys and his old life downstairs with the servants. Last year brought him a new love interest in Sarah Bunting, an outspoken teacher with radical political views, but when Leech talks about the Branson-Bunting pairing, it doesn’t sound too promising for the two. He says that Bunting reminds Branson of his past, but that he doesn’t see a long future for them.

When asked to reveal any plot points for the upcoming season, Leech revealed to much laughter, “Well, the unicorn farm, no one expects,” to which Dockery replied, “It’s much more pleasant than the pigs.”

Allen Leech, who was originally hired on for only three episodes in the first season, is quite pleased with the arc his character has taken.

“I never envisaged that Tom would be where he is now. I was … lucky enough to come back for the second, and thought that might be it … So it’s been an incredible arc. The character’s been on an incredible journey. When Sybil died, I thought that might be it for me as well. And Julian, rather than running away from that, he actually embraced it, and he engaged with what that poor man had to do—the fact that he lost his wife and he was in this world he didn’t really understand. So in no way did I expect that I’d still be here, but I’m still delighted that I am. And I’ll be honest. I’m expecting to meet a truck on a narrow lane any day now.”

Leech looked particularly tan during his interviews and admitted he had spent two days at Santa Monica beach and that they still had a little over three weeks left still to shoot, including the Christmas special. He feared the makeup department would be angry with him, but then said, “I’d like to keep them on their toes.”

PBS also revealed a couple of new shows coming to the network, including “Poldark,” a remake of a popular 1970’s Masterpiece Theatre series, and “Wolf Hall,” based on the popular books from Hilary Mantel.

“Poldark” follows Ross Poldark, a man from Cornwall who returns from the Revolutionary War to enter into a love triangle to beat all love triangles.

“Wolf Hall” stars Mark Rylance as Thomas Cromwell and Damien Lewis as King Henry VIII. (This casting announcement was greeted by a collective “oooh” from the female portion of the audience.)

PBS also revealed that the new season of “Sherlock” will start filming in 2015.

Season 5 of “Downton Abbey” will premiere on PBS’ Masterpiece Theatre on January 4, 2015.