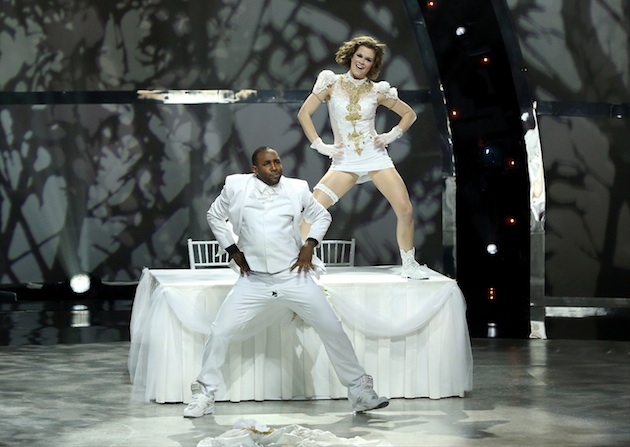 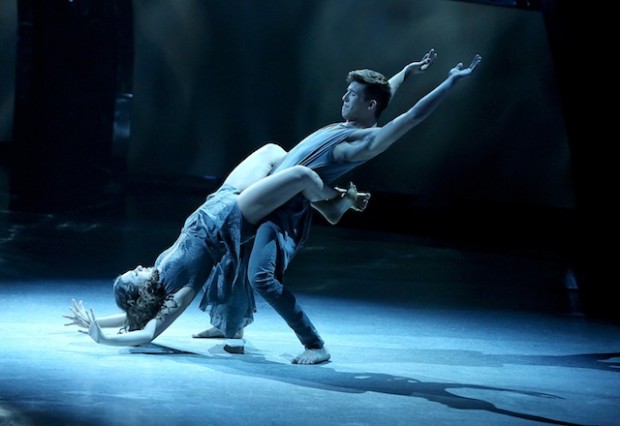 How about it, city kids, we’ve got our new Top 4! A somewhat surprising result on “So You Think You Can Dance“ leaves me very happy, but only after the Top 6 works overtime, performing three dances each: a routine with their previous partner, an all-star routine, and a solo—plus a group number by Justin Bieber’s choreographer Nick Demoura.

Rixton performs their big hit, Me and My Broken Heart, and Christina Applegate returns to the judges’ table with Mary Murphy and Nigel Lythgoe. She frequently talks about the dancers’ emotions and facial expressions, and occasionally puts them on the spot. But more on that later. First, there’s a lot to squeeze into my Top 5.

Both tappers, Valerie and Zack, kill it tonight with awesome hip-hop routines. Valerie’s “first wedding dance” with all-star Twitch, choreographed by WilldaBeast, is so much fun, with her adorable wedding half skirt, but she’s also a badass. Twitch is surprised that she’s so funky “for a tapper.” Excuse me? Tap is funky! Especially rhythm tap, which is very different from the unison hopping of a musical like “42nd Street.” It’s still a different look for Val, who is sexy and hard-hitting instead of sweet and enthusiastic.

Sean Cheesman gives up the metaphor of 99 Red Balloons in favor of a literal giant red ball in his contemporary for Jacque and all-star Will. The couple slides over, leans on, and throws the ball as they play, which is much trickier than it looks. They finish the routine in a sea of red balloons. While the dancing is lovely and there are a couple cool tricks with the ball, the props are a little overwhelming, and not totally necessary. Just enjoy the movement.

Jessica and all-star Ade look like they stepped out of Weird Al’s “Tacky” video in their crazy neon outfits for Ray Leeper’s jazz. The dance is fun and mostly fast, though there are a few movement passages that seem almost in slow motion, which is perhaps why Nigel is not as pleased with the routine as Mary or Christina are. I enjoy it though, and remember it after the night’s over. Though perhaps more for Jessica’s wacky Anime ragdoll Lady Gaga look.

Poor Casey bears the brunt of Christina’s awkward questioning after his wonderful Stacey Tookey routine with all-star Makenzie (who has probably the most beautiful feet of any SYTYCD contestant). Christina puts him on the spot, asking him how he feels and forcing him to try to express his emotion about the dance while he’s trying to catch his breath. This uncomfortable exchange doesn’t detract from the dance, though. Stacey’s beautiful choreography uses contact improvisation techniques to convey emotion and connection, telling the story of a couple’s last day together. Makenzie climbs Casey like a tree), and the pair lean on, reach for, and support each other throughout. Emotionally moving and beautifully danced.

Zack is so tremendous, kicking butt again—twice—with another brilliantly timed and lightning-fast solo to Jason Mraz (he must be so thrilled, as am I, that Mraz is performing on the show next week). He also completely adapts to Phillip Chbeeb’s extremely unique popping style—while holding his own next to last season’s winner, Fik-Shun. No small feat. It’s about time they brought season 4’s Chbeeb on as choreographer, and he does not disappoint, with his wicked cool inkblot imagery. Zack matches personality wits with Fik-Shun while still embodying the character of the dance. He’s so very awesome, I’m including both of these videos here.

With the dancing finished, Cat reveals our new Top 4. The women aren’t too surprising, with Jacque sent home as Jessica and Valerie (who has yet to be in jeopardy) stay to duke it out. But the men’s race is a little tighter. Ricky’s obviously a shoe-in, but Casey and Zack have both had time in the bottom, and it seems like Casey may have an edge. But no, Zack stays, earning passage to the Top 4, while Casey goes home. I for one am thrilled about that, especially as this is the first time the show has ever had two tappers in the Top 4! Woot!

So what do you think, city kids? Are you happy with your Top 4, or were you hoping for a different result? Who do you think will take the grand prize? Which are your favorite routines tonight? Cast your vote in the comments.