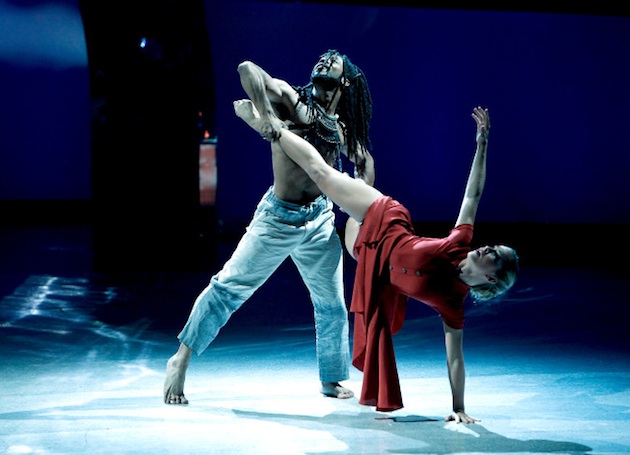 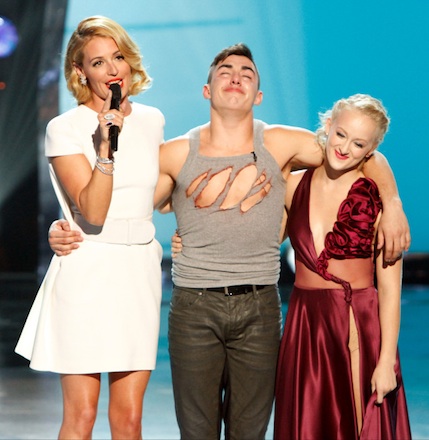 So, city kids, “So You Think You Can Dance” celebrates The King of Pop with a full evening of his music, including a glimpse of his new video, A Place with No Name. The Top 8, clad in purple hair and silver robotic costumes, also takes a turn with the single with Michael Jackson’s own choreographer, Travis Payne. The song is pretty good, and apparently America was honored that Michael Jackson used their tune.

Jenna Dewan Tatum of the “Step Up” movies, and now of “Witches of East End,” is there to share judging duties with Mary Murphy and Nigel Lythgoe. She also shares a clip from her new show with some very cheesy 1970s-style dancing, directed by SYTYCD’s own Debbie Allen.

Cat Deeley, sporting an adorable bob updo, tells us all eight dancers will provide solos tonight. She also reveals who’s safe and who’s in jeopardy as the evening progresses. The results are a little surprising, with Casey, Tanisha, and lovebirds Rudy and Jacque making up the bottom four. But before we discuss the elimination, let’s look at My Top 5 dances this week.

As the tap lover that I am, I have to include Zack’s awesome solo. He’s so good, definitely one of my favorites, and not just because I’m partial to tappers. His solo runs practically non-stop, with fast, intricate rhythms, but still incorporating pauses so you can parse what is happening and actually hear what he’s doing (if it’s just a barrage of machine gun taps, then you can’t really separate out the rhythms). He also has fantastic slides, still (barely?) under his control, and does this all perfectly within the small time he’s allotted. Amazing.

It’s difficult to choose between Casey and Comfort’s Pharside and Phoenix hip-hop with its “Kiss of the Spider Woman” theme, and Rudy and Allison’s obsessive Ray Leeper routine. Both are really great, and the dancers are terrific, but I’m going to have to go with Rudy and Allison. No offense to Rudy, but I’m choosing this routine mostly because of Allison. She is such a stand out, and so powerful, it’s near impossible not to watch her. Rudy did well keeping up with her, and was certainly a good support system for her, but I almost felt that Leeper could have given him more to do. Casey’s Spider Woman routine, while really cool, also fell slightly on the side of too much theme and theatricality, and not enough content.

Perhaps my bias is showing, but Zack is back on my list with his Spencer Liff Broadway with Makenzie. He’s just so smooth and sexy, oozing sensuality and cool. He keeps the energy up, even when MJ’s great song feels slow (“The Way You Make Me Feel” makes a great West Coast Swing, by the way), and he has gorgeous lines, stretching through every muscle. Their unison isn’t quite there in a couple places, but they dance well together. It’s fun.

My bias for choreographer Mandy Moore is returning too, but I’ve got to include her Humankind vs. Earth contemporary with Jessica and Will in my Top 5. What a great concept, and a lovely routine, though I somehow wanted it to be a little less abstract in its theme. Jessica, like Rudy and Allison, has to work harder because Will is so engaging, and not just because of his long dreadlocks (long flowing hair often grabs attention). He is so strong and dramatic, but she keeps up with him.

I feel a little badly giving one of my coveted Top 5 spaces to the guest crew, but they’ve all been so good, and Control Freakz is certainly no exception. With the flickering blue lighting, unison popping and animation, and cool French music from Amélie, the routine seems like an old-timey nickelodeon movie. So cool. I love that it’s a mixed team too, with men and women dancing together.

With all the performances out of the way, Cat reveals the surprising eliminated couple: Rudy and Tanisha. I thought Casey’s time was up, having been in the bottom twice before, and figured Tanisha would survive longer than Jacque, who was largely unknown when the competition started. What’s also interesting is Rudy and Tanisha were partners, as the last three eliminated couples have been. Has America forgotten that we’re voting for individuals, or is it really just a coincidence? Poor Rudy is an absolute wreck too, starting to cry before Cat announces the results. Zack also weeps for his friend, from the safety of his Top 6 box. So much for Rudy’s romance with Jacque, at least as far as the show is concerned.

So what do you think, city kids? Is it odd that everyone is leaving in the couples they were assigned? Are you surprised to see Rudy and Tanisha go? What are your favorite routines this week? What did you think of this all Michael Jackson evening, and do you like his new single? Let me know in the comments.