The majority of Eric Merola’s documentary, “Second Opinion: Laetrile at Sloan-Kettering” shows Ralph W. Moss sitting in a chair telling us what happened in the 1970’s when he worked at New York’s Memorial Sloan-Kettering Cancer Center, but this doesn’t detract from the drama of his story.

Moss has written a number of books on this subject since that time, but the negative opinion about Laetrile continues despite the evidence that the drug was actually quite effective in treating cancer. That doesn’t mean it’s a cure, but there was a calculated cover-up regarding the positive results that Laetrile brought in the studies conducted by Dr. Kanematsu Sugiura at Sloan-Kettering during the time in question. 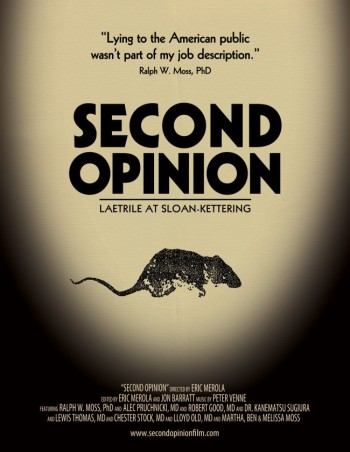 Moss was a young man working in the Sloan-Kettering public affairs department, and as such, he was privy to the research results. Then, the men in power there lied to the public, saying that there had been no evidence that Laetrile had yielded positive cancer treatment results in mice. Moss was dumbfounded, and because he refused to keep his mouth shut, he was fired and escorted out of the building by armed guards.

Twenty years later, he was invited back to receive an award, but Sloan-Kettering has never admitted what it did. Moss talks about how the medical establishment – oncologists specifically – stick to what “big pharma” wants when it comes to cancer treatment. He calls what the Sloan-Kettering officials did “tragic” and “diabolical,” and he says they “didn’t have the courage of their convictions.”

Why did these men ignore the results of the Laetrile research and lead the charge to ban it in the U.S.? The film quotes a former FDA official as follows, “Nobody is going to pay $70,000 for a new cancer drug if they can buy Laetrile for 75 cents.” There you have it.

The greatest irony is that many of those same officials ended up dying of cancer. Sobering stuff.

It’s important to note that the film is not necessarily advocating the use of Laetrile, but perhaps additional studies would make sense.

“Second Opinion: Laetrile at Sloan-Kettering” opened in New York at Cinema Village on August 29 and will open in Los Angeles and San Francisco in September. Check the website for details.

If you aren’t in those cities, you can purchase the DVD or Blu-Ray now, which contains 12 extra chapters. Ralph W. Moss has also published a companion book to the documentary called “Doctored Results.”

In addition, there is a link on the film’s website to a petition calling on Sloan-Kettering to acknowledge the positive Laetrile findings from the 1970’s.