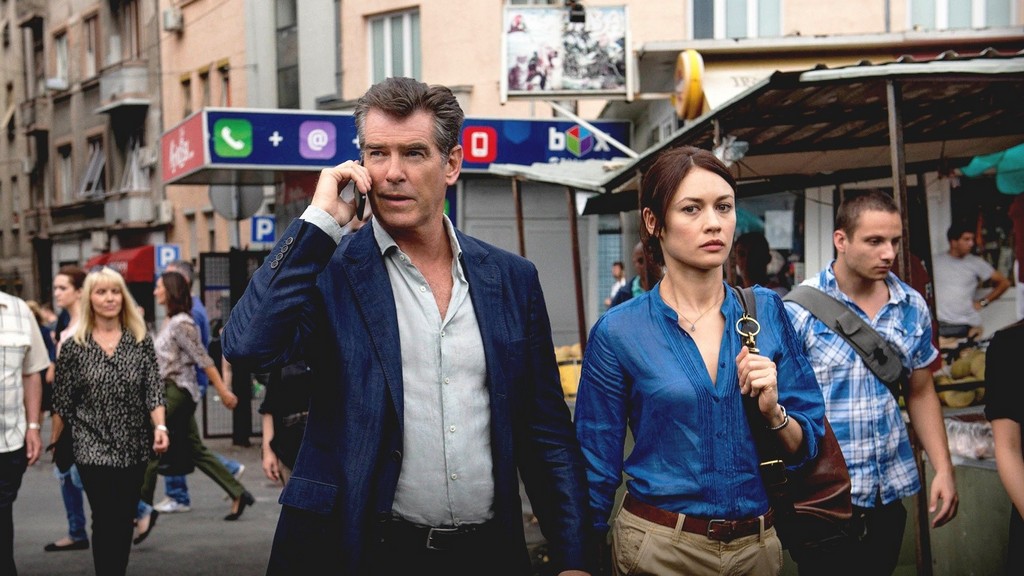 EDITORS: Buy this feature and photos in our Editorial Web Shop.

SYNOPSIS: Pierce Brosnan returns to spy mode as an ex-CIA operative who’s brought back for a very personal mission. But he soon finds himself pitted against his former protégé in a deadly game involving high level CIA officials and the Russian president-elect. 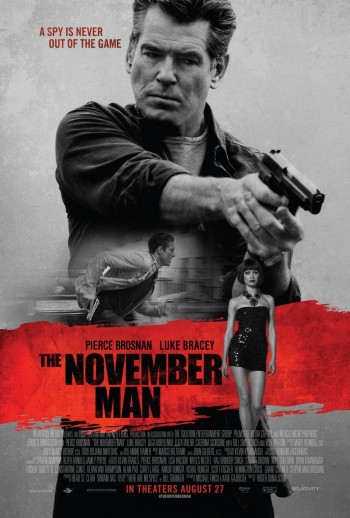 REVIEW: I was pretty excited about “The November Man,” because like everyone else on the planet, I like seeing Pierce Brosnan back in the spy game. But, you know, it’s not Bond, James Bond. It’s Devereaux, Peter Devereaux. And it’s just not the same. Even though that’s an awesome name.

When Brosnan was unceremoniously booted from the Bond role back in 2005, he said at first it was a jolt to the system, and then he was ok with it. “It never felt real to me,” he told Entertainment Weekly back then. “I never felt I had complete ownership over Bond. Because you’d have these stupid one-liners — which I loathed — and I always felt phony doing them.”

It’s true. Bond is all about the one-liners, and it would be hard to own such an iconic role. Brosnan has done a variety of roles since then, but I still like him as a spy, maybe even a spy franchise. I’m not sure it’s going to be “The November Man,” though. There are plenty of cool scenes, like Brosnan walking away from explosions and driving an impressive sports car, but the plot is a bit convoluted and the characters stereotypical. Especially the females. Ok, there’s one female assassin, but all the others need saving.

Jump ahead several years, and Devereaux’s old boss, Hanley (Bill Smitrovich), asks for his help in getting a fellow agent, Natalia (Mediha Musliovic), out of Russia, where she’s posing as an aide to a powerful Russian politician, Fedorov (Lazar Ristovski). Devereaux manages to extract her, but Mason unexpectedly appears on the scene and things end badly, with Devereaux and Mason facing off.

Along the way, Devereaux obtains the name of someone who might know something about Fedorov, and the key to this person’s whereabouts lies with a social worker, Alice Fournier (Olga Kurylenko).

“The November Man” has all the makings of a good spy movie — Russian bad guys, beautiful women, CIA agents at odds, global politics, lots of explosions, chase scenes and gunfire … but we’ve seen all this before. It’s Bond, without the Bond. There’s not a lot of “there” there. Even the chemistry between Devereaux and Mason doesn’t have a chance to really develop.

And even though there’s some high-tech spy stuff — drones, computers, etc. — the characters rely more on old-fashioned dumb luck to keep themselves from becoming fish food. There’s a sub-plot about the toll that killing takes on people who kill for a living, but it’s buried in the other stuff.

In summary, Brosnan still has great on-screen charisma, but you can probably wait for this one to hit cable TV.

Sex/Nudity: Topless dancers dance at a topless bar. A crime scene victim is shown in a bathtub with her breasts in view. Some kissing. A character has sex with the neighbor, though nothing graphic is shown. Photos of a married couple in bed.

Violence/Gore: A rape scene is shown from the perspective of the female. A female character wears a skin-tight outfit and disguise to seduce and kill her rapist. A child is accidentally shot in the chest during a shoot-out. Several scenes involve shooting, chasing, stabbing and explosions, with lots of blood shown. A character cuts a major artery in a woman’s leg, resulting in lots of blood. A character is smacked in the face with a shovel. Gory crime scene photos are shown.

Drugs/Alcohol: A character drinks scotch after a tense scene and is shown drunk and angry. A character snorts coke.

Which Kids Will Like It? This one really isn’t for kids, but probably ok for ages 17 and older.

Will Grownups Like It? I love seeing Brosnan in spy mode, but if you’re looking for a James Bond movie, this isn’t it.

Jane Boursaw is the film critic and editor-in-chief of Reel Life With Jane. Contact her at jboursaw@charter.net and check out the shop for fresh editorial content.