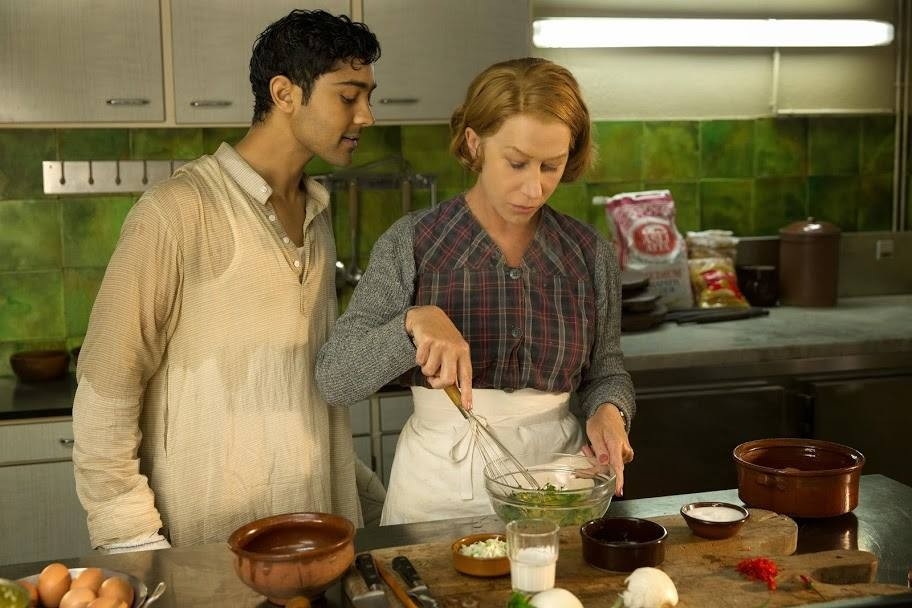 SYNOPSIS: After tragedy hits their restaurant in Mumbai, the Kadam family journeys to France and opens a restaurant next to Madame Mallory’s celebrated French restaurant. A culture clash quickly ensues. 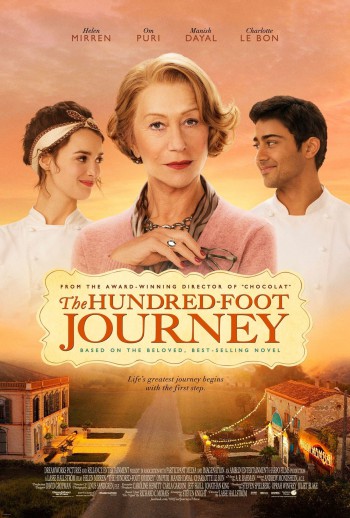 REVIEW: I love a good food movie. There’s something about seeing those close-ups of simmering sauces and vegetables and meats that makes me want to come home and cook up something gourmet-like (the feeling usually passes before I hit the driveway). But “food is memories,” says the young chef in “The Hundred-Foot Journey,” and I’ll add passion and life and love and family and friends. Food brings people together, which is exactly what happens in this movie.

The story follows the Kadam family, whose famed restaurant in Mumbai is burned to the ground during a rebellion sparked by civil unrest. Young Hassan (Manish Dayal) and his family hit the road and eventually end up in a small French town, thanks to their brakes failing epically on a country road.

When Hassan’s father sees a dilapidated old restaurant, he decides the family should start anew there. However, directly across the street is a celebrated French restaurant owned by the staid Madame Mallory (Helen Mirren). The eatery specializes in fine dining and is the proud owner of a famed Michelin star, so imagine Madame’s dismay to see this raucous Indian family with their colorful decorations and spicy food opening a restaurant so close to her own.

It’s all-out war until interesting things begin to happen. She and the elder Kadam reach a tentative truce, as Hassan starts to fall for Marguerite, the sous chef in Madame’s kitchen, who teaches him how to cook French cuisine.

“The Hundred-Foot Journey” is a pleasure to watch. The aforementioned food scenes, blended with the family story, the cultural delights, peppy Indian music, and the gorgeous French countryside are a feast for the senses.

Then you get to a point in the movie where it feels like it might end, but then continues on into a third act that seems out of place and overly long. The movie is based on the novel by Richard C. Morais, so they probably couldn’t stray too far from the original story (because, yeah, that never happens in a book-to-movie adaptation), but I can’t help feeling there could have been a better way to wrap things up. Instead, we have something that feels like it was slapped onto the end of the movie. Yeah, I’m being vague because I don’t want to give too much away.

That’s really the only reason “The Hundred-Foot Journey” didn’t get a full five reels from me. Other than that, I loved everything about this movie, including, of course, the most excellent performance of Dame Helen Mirren, who shifts from “Red 2” to “Hundred-Foot Journey” with ease.

Sex/Nudity: A male and female are attracted to each other and share a few kisses. One scene shows them emerging from a back room pulling clothes on after a romantic moment. An older couple flirt and discuss being more than friends.

Violence/Gore: Angry people trash a restaurant and burn it to the ground, causing a death in the process. Later in the movie, two people try to burn down a building, and a main character is injured because of it.

Drugs/Alcohol: Adults drink wine with meals. A character drinks to cope with life.

Which Kids Will Like It? The PG rating is on target, but I’m guessing this movie will appeal to teenagers who have an interest in the culinary industry.

Will Grownups Like It? It’s a lovely movie that will likely make you hungry for more than buttered popcorn.