SYNOPSIS: Those familiar heroes on the half-shell are back, battling an evil kingpin who wants to take over New York. No worries, though. Megan Fox and Will Arnett are there to help. 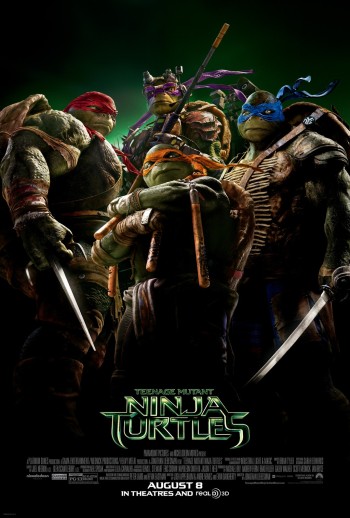 REVIEW: It’s kind of baffling that a group of superhero turtles have stood the test of time, but here they are again. Back on the big screen and fighting bad guys in between eating pizza and delivering quippy one-liners from their sewer lair. The turtles are funny. And the special effects aren’t bad either.

The story and characters in “Teenage Mutant Ninja Turtles” are familiar to longtime fans. In New York City, a crime wave is unleashed by the evil Shredder (Tohoru Masamune) and his gang known as the Foot Clan. TV reporter April O’Neil (Megan Fox) is tired of covering fluffy stories, so she investigates a mysterious vigilante who fights the Foot Clan under the cover of darkness. She finds not one, but four masked turtles, named Leonardo (Pete Ploszek; voiced by Johnny Knoxville), Michelangelo (Noel Fisher), Donatello (Jeremy Howard), and Raphael (Alan Ritchson).

It’s enough to make a strong girl faint, which is just what April does upon meeting the reptilian crime-fighters. Not only that, but she figures out that when she was a kid, these same turtles were her pets and the subject of lab experiments conducted by her father and well-known scientist Eric Sachs (William Fichtner, the newest “Willem Dafoe” of bad-guy roles).

Ok, let’s stop and think about this for a second. Imagine you’re a kid with some cute pet turtles. A disaster happens in the lab where your dad works, so you grab the turtles and set them gently down outside near a gutter. That’s the last time you see them. Until you grow up, become a TV reporter, and stumble across them while investigating a crime. Now they’re superheroes who wear masks, have awesome ninja moves, and train with a warrior sensei known as Splinter (voiced by Tony Shalhoub), who by the way, was a mouse in that same lab from your childhood days. Ok, I’ll climb onboard that train. Why not, right?

It was time for a turtle resurgence on the big screen, and director Jonathan Liebesman and producer Michael Bay are just the team to reboot this franchise. The plot is background noise to Bay’s signature explosions, Fox’s still impressive body (even after two kids, the second born in February of this year), and the amazingly realistic turtles, thanks to Industrial Light & Magic’s performance-capture technology, similar to WETA’s “Hobbit” and “Rise of the Planet of the Apes” technology.

The animated series is still popular on TV, which helps to cement this live-action franchise with a younger generation. A sequel is already in the works for a 2016 release date. I’m hoping we get a little more into the various personalities of the turtles in the next one.

Sex/Nudity: Michelangelo says April is so hot that his shell is “tightening,” and he calls “dibs” on her and says she’s a “hot chick.” Her photographer Vern (Will Arnett) flirts with her and stares at her butt during a life-and-death scene. To avoid being seen, two of the turtles climb a Victoria’s Secret billboard and attach themselves to the model’s bra, one turtle on each breast.

Violence/Gore: A flashback fire kills a scientist and nearly kills the Turtles and Splinter. Some of the fight scenes and explosions leave people injured and unconscious, but we don’t see anyone die. Three of the Turtles are tortured, but spring back into action when help arrives. A deadly toxin is nearly released into the city. The Foot clan is militant and evil looking.

Profanity: Insults like “idiot,” “stupid,” and “jackass” are as bad as it gets.

Which Kids Will Like It? Kids 11 and older who like the animated series or characters, or movies with computer-generated effects and lots of action.

Will Grownups Like It? Ok, so it’s not a piece of high art, but if you’re a fan of the turtles or remember them as a kid, you might get a kick out of this movie.