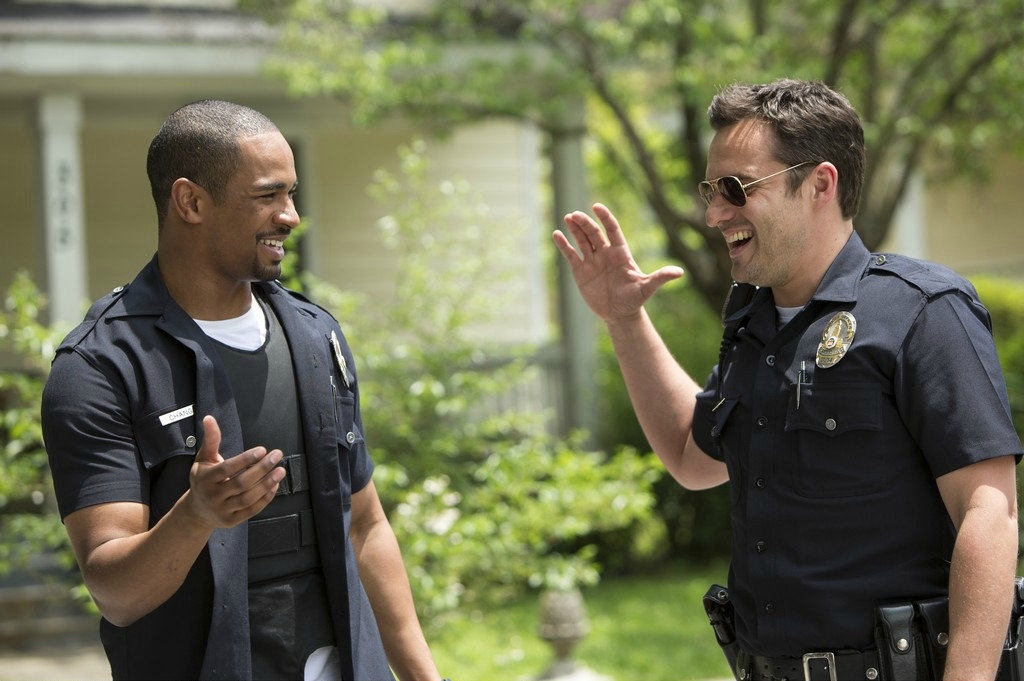 SYNOPSIS: Jake Johnson and Damon Wayans, Jr. play struggling pals who dress as cops for a costume party, then become ensnarled in a real-life web of mobsters. 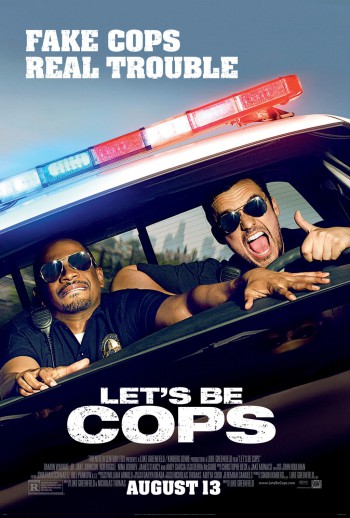 REVIEW: I honestly did not expect to like “Let’s Be Cops” as much as I did. But Jake Johnson and Damon Wayans, Jr. have great buddy-cop chemistry, and the movie delivered a lot of laughs and some good action scenes, too. That is much appreciated after a week of losing both Robin Williams and Lauren Bacall. Rough week in the entertainment world.

The story follows Justin (Wayans) and Ryan (Johnson), two friends who are both pushing 30 and still haven’t made it big after moving to Los Angeles from Ohio. Justin is still trying to get his video game project launched, and Ryan is an actor with no acting gigs lined up, save that one herpes commercial a while back that didn’t launch him to stardom like he hoped.

When the two pals dress up as LAPD cops to attend a costume party, they discover that the uniforms give them the status they so covet. Just for kicks, Ryan buys a real-life cop car on eBay and the two start patrolling the city as cops. Imagine their surprise when they somehow become involved with mobsters and other unsavory criminals.

After editing Connie Wang’s recaps of “New Girl,” I knew Jake Johnson had that something special when it comes to comedy. And while I haven’t followed the career of Damon Wayans, Jr., (who’s also on “New Girl”), it’s clear he has staying power. These two have amazing chemistry and timing, and their pairing in this movie is solid gold.

Sure, the plot is a little formulaic, but they throw themselves into it with gusto and ratchet up the comedy to laugh-out-loud funny. I actually would have preferred more laughs in the second half of the movie, which was mostly action and shooting and catching the bad guys, but I also like the little poignant moments tossed in here and there.

“The Vampire Diaries'” Nina Dobrev doesn’t have much to do other than need rescuing, but she does it well. I would love to see her go the way of Shailene Woodley and do a thoughtful independent movie a la “The Descendants,” so I’m looking forward to seeing where her career goes after “The Vampire Diaries” ends. Rob Riggle is great as the clueless cop who thinks these guys are real cops (I guess the department is big enough that they don’t know everyone?), and I can’t wait to see him in his upcoming films, “Dumb and Dumber To” and “Absolutely Anything.”

Need a laugh? I think we all do, and “Let’s Be Cops” is happy to help. I especially love the scene with the fat nude guy (a sentence I never thought I’d write), which ranks right up there with the “chasing the naked guy through the hallway” scene in “Borat.” The writing is also fantastic. Favorite lines: “Do NOT Tom Cruise-run!” and “It smells like a fish farted in here.”

Sex/Nudity: A man and woman flirt and kiss passionately. A woman takes off her top and is shown partially nude from behind. A woman comes on to two men and makes assorted crude and suggestive comments. Four cops try to apprehend a large, naked man, and one cop ends up WAY too close to the guy’s genitals.

Violence/Gore: Several scenes where cops and criminals engage in shoot-outs, with many people injured or dead. Other scenes include a fist fight, a character threatened by torture, some heavy artillery with bullets flying everywhere, and vicious mobsters who spit in faces and threaten people.

Drugs/Alcohol: Several scenes where adults drink beer or wine at home, in bars or restaurants. People smoke pot in various scenes, including one where smoke billows out of a parked car. A character is coerced into smoking crystal meth.

Which Kids Will Like It? Kids 17 and older who like funny buddy-cop movies, or Jake Johnson and Damon Wayans, Jr. movies or TV shows.

Will Grownups Like It? “Let’s Be Cops” is really very funny, although they could have ramped up the humor a bit more in the second half, which was mostly action and peril.