SYNOPSIS: Storm trackers, thrill-seekers, and just regular folks document an unprecedented onslaught of tornadoes touching down in the town of Silverton, Oklahoma. 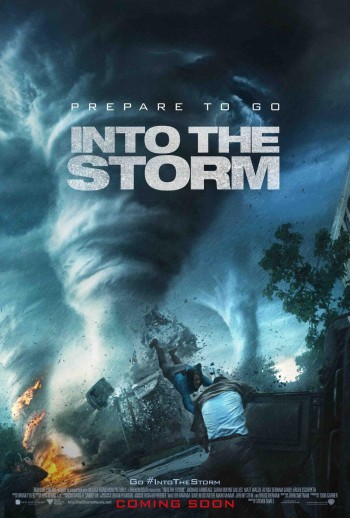 REVIEW: There’s something about storm movies that I just love, whether it’s blizzards, hurricanes, twisters, tsunamis or what have you. Maybe it’s the awesome power of nature that appeals to me, or maybe it’s just the sheer determination of people banning together to survive against all odds.

That being said, I think “Into the Storm” would be difficult to watch if I’d actually lived through a twister carving a hole in my town. Then again, I still love a good snow movie, and I’ve experienced my share of blizzards and ice storms, having lived in northern Michigan my entire life.

When Donnie’s long-time crush, Kaitlyn (Alycia Debnam Carey), needs help shooting a video for her internship application, the two head to an old mill, just as the first of several tornadoes hits town, decimating everything in its wake.

I’m not gonna lie. “Into the Storm” has some amazing storm sequences. Every twister movie will be measured against the twisteriest movie of them all, “Twister,” and there are some genuinely killer special effects in “Into the Storm.” And because it’s one twister right after the other, there are plenty of catastrophic scenes of twisters plowing through neighborhoods, tossing buses and cars into the air, and sucking up everything from planes to people. I especially loved one scene that involved a twister melding with a fire, sending a big tail of fire into the sky.

I’m not sure the human story is quite as interesting as Helen Hunt and Bill Paxton in “Twister,” but “Into the Storm” features a single dad doing his best to raise kids on his own (and Richard Armitage is not hard to look at). Providing comic relief are two drunk yokels who decide to follow the storm chasers around and record with their phones, hoping for YouTube fame. Don’t miss the one-liner about the aftermath looking like a zombie apocalypse, a reference to Callies’ “Walking Dead” gig.

Sex/Nudity: A teen couple is shown making out in the backseat of a car. Some hand-holding, embraces, and a mild kiss. A teenager says he hopes to have a “smokin’ hot” wife he can “bang,” and another teen takes photos of a “hot” teacher with a great “rack.”

Violence/Gore: The tornado scenes are pretty intense, with massive destruction and many people killed or injured. Two people nearly drown, and one needs to be revived. People are sucked into the twister, and one scene shows a man sucked into a fiery vortex. Another shows a man inside a vehicle sucked into the middle of a tornado where he presumably dies.

Drugs/Alcohol: Two adult characters drink beer and are drunk throughout the movie.

Which Kids Will Like It? It’s pretty intense for a PG-13 movie, but I still think it’s ok for kids 13 and older, especially those who like weather and meteorology.

Will Grownups Like It? While it might not quite measure up to “Twister,” it’s still a worthy installment in the weather-disaster movie genre.