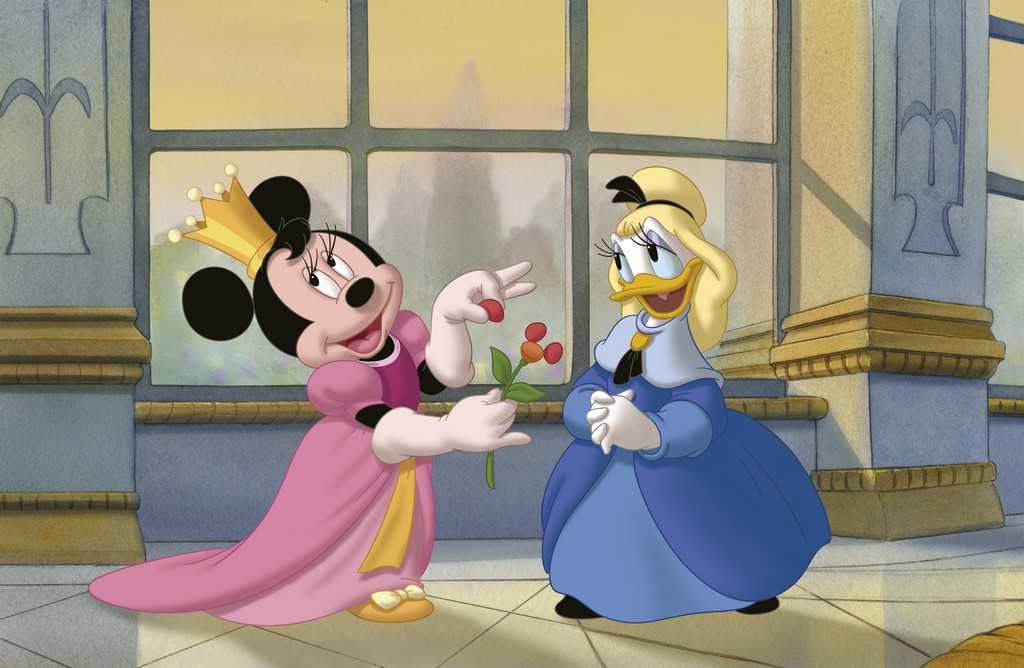 EDITORS: Buy this feature and photo gallery in our Editorial Web Shop!

It’s always a thrill when beloved Disney classics are released on Blu-ray. These stories and characters never get old, and it’s a testament to the brain-trust at Disney that so many of their films stand the test of time.

Now for the first time ever on Blu-ray Superset (Blu-ray Disc, DVD and Digital copy), each title digitally remastered with high definition picture and sound, are “Tarzan,” “Hercules,” “Bedknobs and Broomsticks,” “Micky, Donald & Goofy: The Three Musketeers,” and a 2-Movie Set that includes “The Adventures of Ichabod and Mr. Toad” and “Fun and Fancy Free.”

Disney’s legendary adventure is better than ever, filled with thrills, laughs and Oscar-winning music (Best Music, Original Song, “You’ll Be In My Heart,” 1999). The adaptation of Edgar Rice Burroughs’ story begins deep within the jungle when baby Tarzan is adopted by a family of gorillas. But his “Two Worlds” collide with the arrival of humans, forcing Tarzan to choose between a “civilized” life with the beautiful Jane and the life he shares with his fun-loving friends and gorilla family.

Directed by Chris Buck and Kevin Lima, the voice cast includes Tony Goldwyn as Tarzan, Minnie Driver as Jane, Brian Blessed as Clayton, Rosie O’Donnell as the gorilla, and Glenn Close as Kala.

JANE’S REVIEW: The storytelling is fast-paced with lots of action, and I love the voice actors, especially Nigel Hawthorne as the bumbling professor and Rosie O’Donnell as the troublemaker gorilla. The soundtrack is memorable, too, including Phil Collins’ Oscar-winning song, “You’ll Be in My Heart.” Ok for kids 6+.

Nominated for an Oscar for Best Music, Original Song (“Go The Distance”), this family film is packed with lots of laughs and non-stop adventure. Taken from the gods as a newborn and adopted on earth, Hercules is just an awkward pillar of strength trying to fit in. What he wants most is to impress his father Zeus. When Hercules discovers Hades’ sinister plot to take over Mount Olympus, he goes from zero to hero and, with the help of his pals Pegasus and Phil, discovers that real strength comes from the heart.

JANE’S REVIEW: James Woods makes a great villain, and sidekicks Pain and Panic (Bobcat Goldthwait, Matt “Max Headroom” Frewer) are wickedly funny. The storyline might be a bit confusing for little ones, including a gospel Greek chorus that provides backstory and the “three fates,” who share one eye and cut a thread when a human’s life is extended. Yeah, even I had trouble following that one. Ok for kids 7+.

Disney legends Angela Lansbury and David Tomlinson star in this beloved film about an apprentice witch who reluctantly takes in three orphan children. Though her first spells create more laughs than magic, Miss Price and the children soon find themselves swept away aboard a fantastic flying bed – their ticket to fun-filled excitement and adventure. Directed by Robert Stevenson (“Mary Poppins”), the cast also includes Roddy McDowall.

JANE’S REVIEW: While this movie didn’t strike the same magic as “Mary Poppins,” there’s still plenty to love, including the animated portion on the island of Naboombu and the comic shenanigans of the characters competing in a soccer match. Less compelling for kids is the war-time theme, assorted sexist remarks, and Miss Price’s sad song about being single. Ok for kids 7+.

Best buddies Mickey, Donald and Goofy are small-time janitors with big dreams of becoming Musketeers. They may not look like heroes, but, powered by teamwork and friendship, they soon discover they can accomplish anything if they work together. Packed with six rousing songs, this classic tale is fully-restored with new bonus features.

JANE’S REVIEW: There are now female empowerment messages in this classic tale of the damsel in distress, but the movie is action-packed and colorful. Tons of silly details will delight youngsters, like the scene where Goofy runs up the tower stairs, falls out the window, bounces off a horse, spins around a windmill, and lands back inside the tower. Ok for kids 4+.

1) The Adventures of Ichabod & Mr. Toad: Disney’s humorous retelling of two unforgettable classics, “The Legend Of Sleepy Hollow” and “The Wind In The Willows,” come together in this set. First, hang on for a wild ride with the fun-loving Mr. J. Thaddeus Toad. When his passion for motorcars lands him in hot water, he must rely on his faithful friends to clear his name.

Then meet the infamous Ichabod Crane, whose comic rivalry for the affections of the town beauty leads to a heart-pounding race with the legendary Headless Horseman. Directed by James Algar, Clyde Geronimi and Jack Kinney, the voice cast includes Bing Crosby as the Narrator in “The Legend of Sleepy Hollow” and Basil Rathbone as the Narrator in “The Wind in the Willows.”

JANE’S REVIEW: With his long limbs and oversized ears and nose, “The Legend of Sleepy Hollow’s” Ichabod Crane is one Disney’s most memorable characters. The end scenes of Ichabod and the pumpkin-headed horseman are thrilling, but might be too intense for very young kids. “The Wind in the Willows” features a warm Edwardian setting, a bit of slapstick violence, and a variety of British characters. Ok for kids 6+.

2) Fun and Fancy Free: Have some fun with Mickey, Donald, and Goofy in “Fun and Fancy Free,” as Jiminy Cricket brings to life the timeless tales of Bongo and Mickey and the Beanstalk.  This was the last animated feature starring Walt Disney as the voice of Mickey Mouse and the only film featuring all four of Disney’s most famous characters.

Directed by Jack Kinney, Bill Roberts and Hamilton Luske, the voice cast includes Edgar Bergen as Himself, Dinah Shore as Herself, Walt Disney and Jimmy Macdonald as Mickey Mouse, and Cliff Edwards as Jiminy Cricket.

JANE’S REVIEW: Though not well known, this movie is fun from beginning to end, and features some wonderful animated moments. A delightful story to introduce to your kids — and one you might remember from your own childhood.