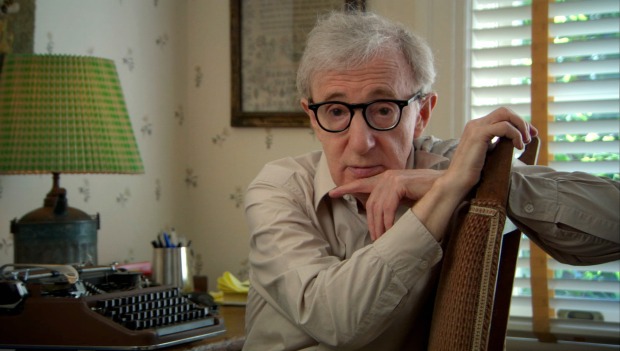 Woody Allen was in fine form today at the press conference for his new romantic comedy “Magic in the Moonlight” at the Waldorf Astoria Hotel. Joined by the film’s stars Colin Firth and Jackie Weaver, Allen was witty and  hilarious even as he espoused his typically grim and bleak outlook on life. Here are some tidbits.

Woody Allen on movies as escapism:

“When I get up in the morning, I go and I work with beautiful women and charming men, and funny comedians and dramatic artists, and I’m presented with costumes and great music to choose from, and I travel a certain amount of places every year. So for my whole life, I’ve been living in a bubble, and I like it. I’m like Blanche duBoise that way. I prefer the magic to reality and have since I was five years old. Hopefully, I can continue to make films and constantly escape into them.”

On why his protagonists tend to be neurotic and find life meaningless:

“Why do I find life meaningless … Because I firmly believe – and I don’t say this as a criticism – that life is meaningless. I’m not alone in thinking this. There have been many great minds far, far superior to mine that have come to that conclusion, both early in life and after years of living, and unless somebody can come up with some proof or some example where it’s not, I think it is. I think it’s a lot of sound and fury signifying nothing, and that’s just the way I feel about it.

“I’m not saying one should opt to kill oneself,  but the truth of the matter is, when you think of it, let’s say, every hundred years, or certainly every 110 years, there’s a big flush and everybody in the world is gone. Everybody’s gone and there’s a new group of people. And then that gets flushed and there’s a new group of people. And this goes on and on interminably toward no particular – I don’t want to upset you – toward no end, no particular end, and no rhyme nor reason.

“And the universe as you know, from the best physicists, is coming apart and eventually there will be nothing, absolutely nothing. All the great works of Shakespeare and Beethoven and Da Vinci, all that will be gone. Now not for a long time but gone. And much shorter than you think really because the sun is going to burn out much earlier than the universe vanishes so you don’t have to wait for the universe to vanish. It will happen earlier than that. There will be nothing. So all this achievement, all these Shakespearian plays and symphonies, the height of human achievement, will be gone completely. There will be nothing, absolutely nothing! No time, no space. Nothing at all. Just zero.”

On the answer to getting through life.

“So what does it really mean to get exercised over trivial problems? That’s why over the years I’ve never written or made movies about political themes, because while they do have current critical importance, in the large, large scheme of things, you know, only the big questions matter and the answers to those big questions are very, very depressing.

“What I would recommend? This is the solution I’ve come up with, is distraction. That’s all you can do. You get up. You can be distracted by your love life, by the baseball game, movies, by the nonsense, can I get my kid into this private school? Can I get this girl to go out with me Saturday night? Can I think of an ending for the third act of my play? Am I going to get the promotion in my office? You know, all this stuff, but in the end, the universe burns out. So I think it’s completely meaningless and, to be honest, my characters portray this feeling.”

“Have a good weekend!”