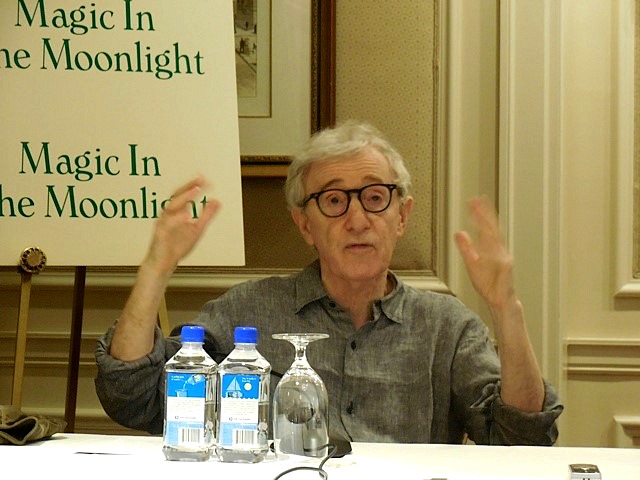 “Magic in the Moonlight” is a bauble in the collection of Woody Allen’s recent comedies. It doesn’t have the depth of “Blue Jasmine” or the originality of “Midnight in Paris,” but there are still pleasures to derive from Allen’s familiar meditations on mortality, fate and life’s meaning.

Allen told journalists at a press conference to promote the film that there is no after-life or spiritual world, so what you see is what you get. But what you see in “Magic in the Moonlight” is pretty nifty. The film is set in the 1920’s on the opulent Riviera, crawling with fancy cars, luxurious costumes and beautiful women.

Colin Firth plays Stanley Crawford, a celebrated stage magician with a particular disdain for phony spiritualists, whose friend, a fellow magician, persuades him to go to the south of France to debunk a beautiful young clairvoyant, Sophie Baker (Emma Stone), who has convinced a rich American matron (Jacki Weaver) she can contact her late husband.

Predictably, Firth’s character falls for the young Sophie, and he begins to believe her clairvoyant powers are real. How much you like “Magic in the Midnight” depends on how much you buy his conversion and willingness to be fooled, along with the film’s message that a man can distract himself from the meaningless of life in the arms of a beautiful woman, in this case, the woman is three decades younger.

At the press conference, Allen – who was joined by Colin Firth and Jacki Weaver – was as witty, charming and self-deprecating as any of the characters in his movies.

Some highlights from the press conference:

Woody Allen on the genesis of the film.

“Magic has always been of great interest to me. I was an amateur magician when I was younger. I’d practice and read up on it a lot. I’m well aware of the history of magic. In the 1920’s there was great vogue in fraudulent spiritualism in the United States and abroad. There was a lot of people exploiting the public with seances and fake mind reading. They were very good at it – they could fool the general public, intellectuals, scientists, doctors and the educated – but they could not fool magicians; the tricks they were using were known to other magicians.

“A number of magicians, Houdini among them, would debunk and expose them, because they were fraudulently deceiving the public and stealing from them. I thought it would make an interesting romance between a fraudulent little mystic and a magician who has a much more sober view of the world. Houdini had a very hopeful, but grim view of the world. The ideas developed rapidly after that.”

Colin Firth’s view of his character, who is intelligent but arrogant and sometimes unlikeable.

“I don’t think he’s a single-faceted character. The trouble with being the smartest person in the room and knowing it, is that you’re probably missing something. One theme that has been coming is that absolute certainty is a rather precarious position. A wonderful thing about making a film or any drama is that you have dialogue. You can take up a position, and have another character take up a completely other position.

“Oscar Wilde said he liked writing dialogue so much because you can argue with yourself. If you just want to say something about your position in the world, you can just say it, you don’t have to spend 90 minutes of screen time. Stanley’s less appealing qualities are largely setups for a fall — which is part of the entertainment.

Jacki Weaver on being cast in her first Woody Allen movie, and if the mystique lived up to the reality.

“I feel I’ve known Mr. Allen for 40 years, because I used to plagiarize his standup as a teenager. He didn’t know that. I’m going to get sued. So it was a totally surreal experience to meet him and be part of his next film. I thought it was a hoax at first. Every now and then I’d be on set and I’d see him sitting at his director’s chair, watching the monitor, and I’d think ‘I can’t believe this is happening.'”

“The hardest part to find was Colin’s part. You needed someone with enormous elegance. Being able to play that role and deliver that role is not an easy role to fill. There are very, very few people who could do it. Colin was our first choice; we were determined to have him. He was scheduled to do another project. Fortunately for us, his other project was postponed. There was a list of other people, who I won’t mention now, but there was an enormous drop in what we’d hoped for. Colin was the perfect person to play this. The part requires a certain savoir-faire, someone who has that attitude without getting on your nerves.

“Emma, I had just seen on the treadmill. She had done some movies that I’d never seen, but I was on the treadmill and suddenly I would see five minutes of this or that and I’d think who is this girl in these adolescent, or post-adolescent type movies? She’s beautiful and very good. I mentioned her name to Juliet Taylor who does casting for my films, and she said ‘Yes, she’s not just a pretty face, she’s a very good actress.’ She was very intelligent to chat with, and I cast her. She is in the movie that I am doing now. She happens to be right for the part, but I was thrilled to be working with her. I had seen Jacki briefly in a movie and I liked her very much. As soon as I met her, I wanted her. And then I thought it was a hoax. I met her for the first time in my screening room, but as soon as she left, I knew we wanted her.”

Allen on the success of his last three films and if he sees any rhyme or reason on why some are hits and some are not.

“Pure accident. You make a film and always hope you’ll make ‘Citizen Kane’ or ‘The Bicycle Thief.’ For one reason or another, one clicks and one doesn’t but it’s out of your control completely. Sometimes the critics will like a film, and the public doesn’t come. Sometimes the critics don’t like the film and the public will come. It’s completely spontaneous. It’s a hazard. You just make the one that you enjoy making at the time and you think people may enjoy the story. It’s just luck.”

Firth on how he avoided what critics call the ‘Woody Stand-In Role,’ imitating his rhythms, speech and mannerisms. How did he prepare for the role and did he study tricks?

“It wouldn’t have been a fit. The role didn’t call for that. Stanley was a wonderfully specific character who belonged in that culture. When I was preparing for the role, I found myself reading P.G. Wodehouse and Shaw, just to refresh myself as to how people sound. That way of speaking has disappeared to a large extent. It really struck me how remarkably Woody hit it. I play it how I see it, or hear it. When dialogue and relationships are good, the work is just done for you, it comes to life. If I’d misjudged that, I had Woody to make what was intended clearer.

“‘Magic’ would have been a lost cause for me. Close-up magic is an art form that is very hard to achieve. I might as well have done a crash course in being a concert pianist. I can’t do it. To achieve it, you’re practicing every waking hour of the day. There was a moment when I was asked to attempt the simplest possible card trick. It was the closest I think we got to reaching Woody’s patience threshold. Only a little sigh at my eighth attempt to do this little thing with one card. I dropped it. That didn’t make the final cut.”

Allen on reality versus illusion and the 1920’s setting, an era very much about illusion, versus the 1930’s when the reality was economic devastation.

“I’m all for illusion. For me, reality is a painful grind. I think it is for everybody, regardless of being rich or poor. I’m going to quote myself here, ‘We all know the same truth, our lives depend on how we choose to distort it.’ In ‘Purple Rose of Cairo,’ it’s all about reality and illusion, and how much better illusion is. The problem is that in that movie Mia Farrow had to choose between reality and illusion. She chose reality, because if you opt for illusion, it’s crazy. You can’t, you’ll go mad.”