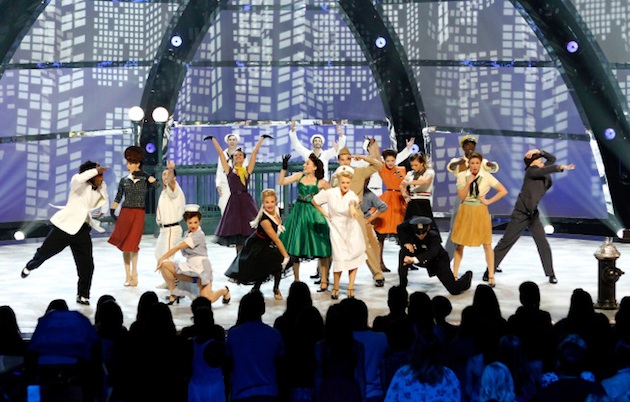 Welcome back, City Kids, to the first elimination episode of “So You Think You Can Dance.” And what a doozie! Don’t know about you, but I did not see those results coming.

After Cat Deeley introduces the judges, Mary Murphy, Nigel Lythgoe, and returning guest Misty Copeland—who are all shilling for the upcoming baseball series broadcast—she tells us that Brooklyn, Jourdan, Malene, Casey, Nick, and Serge are the six dancers in jeopardy. No chance to dance for their lives, but they can impress the judges in couples routines with a new partner.

Joshua Bergasse’s really great, traditional Broadway group routine to Leonard Bernstein’s classic “On The Town” is the first of my Top 5 dances tonight. I guess it’s not surprising that the number is so good, since he’s also choreographing the upcoming Broadway revival. I love the various characters in the group number, and the standout appearances from Emilio, Casey, and Stanley.

I enjoy Emily and Teddy’s hip-hop with Dave Scott a lot more than I expect to, despite that Emily is dressed like Rosie the Riveter. Or perhaps Lucille Ball. That makes no sense to me, and though she could be more grounded and hit harder, she dances well. Teddy, however, is the star of this number, looking sexy and dancing with clean, sharp moves.

Jourdan and Marcquet start their new partnership with a Sean Cheesman jazz piece, where Jourdan interrogates Marcquet by dancing over a table and wearing a ridiculous “sexy Army girl” Halloween costume. I admit the first part of this number didn’t do much for me, but once I got over Jourdan’s get-up and they did their side by side unison dancing, followed by grappling over the table, I really enjoyed it. It got back to the premise, and Marcquet could really shine.

New partners Brooklyn and Casey dance a lovely, sexy Miriam and Leonardo Argentine Tango. I’ve been very clear how much I love Argentine tango, and this choreography is no exception (though we’ll just ignore that total boob grab!). I love the music, and the relationship between the dance and music is great. I also love that there’s no pressure with Argentine tango to tell a story, and it can just be beautiful dance for dance’s sake. While the judges are impressed with both dancers’ maturity, I hoped for just a tiny bit more from both of them. Brooklyn, especially, needs to be more confident.

Justin Bieber and Nick DeMoura may have finished their part on the show (and that’s okay), but we are treated to a performance from the first of the season’s winning dance crews, Chloe Arnold’s Syncopated Ladies. Despite that the taps are so obviously dubbed, there are lots of great rhythms and cool moves in the very musical choreography, like single pullbacks to toe stands, and a wing sequence that builds, starting with Chloe in the middle and emanating out.

Both eliminated dancers are a surprise, as I thought for sure Brooklyn would be out, and absolutely Nick was safe. But no. Nigel announces that Nick is out, as is Malene, who has apparently been getting a pass because of her beauty. Both Nick and his BFF Rudy have a hell of a time keeping it together after this news. Poor guys. I’m sad for them, and sad that Nick is gone.

So what do you think, city kids? Did you see that elimination coming? Do you think the judges made the right call? Which are your favorite routines tonight?