Charles “Chic” Eglee, the new showrunner for season 2 of “Hemlock Grove,” has quite a television pedigree, including “Dexter” and “The Walking Dead.” During my set visit in Toronto in February along with other journalists, we sat down with Chic to talk about his experiences in the weird world of “Hemlock Grove.”

For Chic, this is a first foray into new media after years in network television, and he’s already sold. “We don’t have to worry about the literacy of the audience in terms of the show’s mythology, who’s seen it, and did they watch last week because everybody’s probably sitting down and watching these in a couple of big bites,” he said. “So, that just means that we don’t need to recapitulate either blatantly or in exposition in the episodes what happened or how people arrived to where they are.”

“Binge-viewing really takes that burden away from you. I think it’s actually very freeing,” he added. 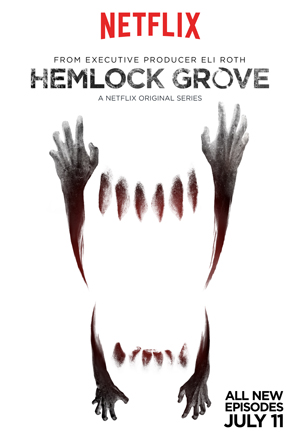 Chic said that season 2 is both character-driven and more action-packed. “We’re excavating very specifically each one of the characters – understanding what their arcs are over the course of the season and also what their arcs are within the episodes,” he said. “So, it just means there’s more story going on. We have an ensemble show, and I think if you’re honoring each of the characters, that’s just a lot of story. I’m much more interested in that than the high concept of the supernatural.”

I was surprised to hear that Chic doesn’t think of “Hemlock Grove” as a supernatural show. “I just don’t think there’s an element of magic at all in it. But that’s actually sort of definitional, if you will. I mean, 500 years ago, if there was a guy walking down the street with smoke coming out of his nose and mouth, and he was screaming about the government, you would have said he was possessed by the devil. Well, now, we would think, ‘Look, this is a chain smoker who needs to be on serotonin-reuptake inhibitors.'”

“So, from the perspective now, we know what’s causing that behavior. It’s not magic, it’s not the devil, it’s not a demon,” Chic went on. “We don’t need an exorcist. We need a shrink who will get the guy back on his meds. So, things that we don’t understand, we make up words for. I would say that that’s the case with upirs. Upirs are not magical beings, and very specifically because I think the minute you create a world that is wholly mystical in which anything can happen, you’re telling the audience that they don’t really have to take things that seriously. The whole thing starts floating about three feet off the ground.”

One of the elements brought into the show this season that was missing in season 1 is the “big bad,” which Chic says “provides a motor and an engine for the show.” This “big bad” – an outside antagonist – is a narrative trope that he used consistently on “Dexter.” “Everything takes place within the proscenium of Hemlock Grove, but there are larger forces that are infringing on the place,” he said.

Chic specifically decided not to read the “Hemlock Grove” book so as not to be constrained by it. Season 1 finished the material in the book, however, so season 2 was written from scratch. “I’m reminded when I was running ‘Dexter,’ I came into the show at a point when they had exhausted the underlying material. They’d finished with the first book, and I remember that there was somebody who was saying, ‘Oh my God, what are we going to do? The book’s done! We’re out of story,’” Chic said. ‘Well, we’ll do what every storyteller does. We’ll make sh** up. So, yeah, we’ve taken the world of ‘Hemlock Grove’ … into the future.” 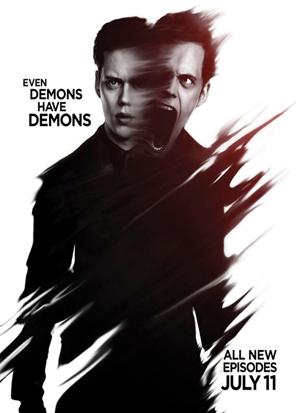 “Most of the shows that I’ve worked on have had some central melodramatic engine that drives the story forward, that allows us to tell our character stories and our character piece…. This season, we do have that for the specific reason of giving it real motion,” he added.

They also have a specific person dedicated to understanding the first season’s mythology and keeping track of it all. Chic qualifies that this individual is understanding it “to the degree that mythology is decipherable because it got a little dense and sometimes contradictory.”

He also explained how his job works in concert with everyone else. “The showrunner is the shot-caller, if you will, because at the end of the day, someone has to make a decision,” he said. “A writers’ room is a collection of different voices – symphonic. Everybody does different things. Everybody does some things better than others. And the showrunner’s job really is to kind of weave that all together and let that exist.”

“There are showrunners that [think] ‘no, it’s my show G**dammit, and it’s my sensibility, and that’s what we’re going to do.’ And I find those shows to be a little less layered,” he said.

Chic is pleased to be working on the show. When he watched season 1, he said that he thought the art direction and acting were both great, and he found it to be an inviting opportunity.

“Working at Netflix has just been a dream. We’re dealing with very, very smart executives that really understand storytellers. They understand writers….,” he said. “They’re so helpful and additive and collaborative, and they really have made the material better. So, I’m more than happy to continue the relationship with people who make me a better writer.”