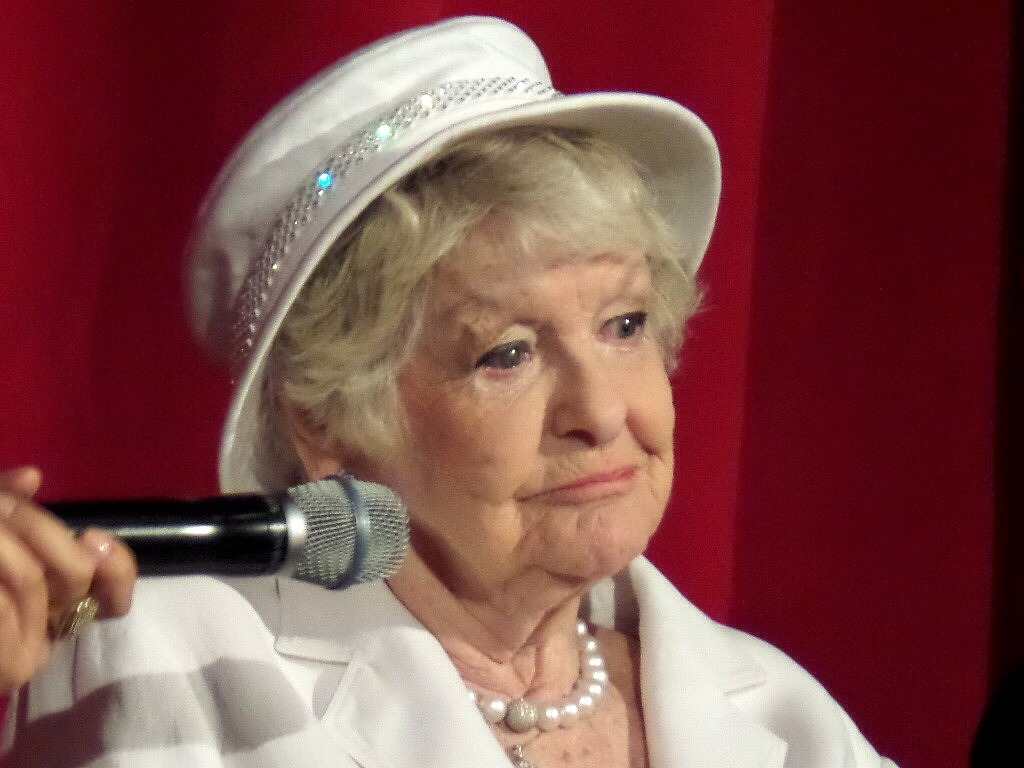 All photos by Jane Boursaw

I was saddened to learn of the death of the one and only Elaine Stritch this morning. But glad I had the chance to see the Broadway legend in person at the Traverse City Film Festival last year, where she was promoting the documentary “Elaine Stritch: Just Shoot Me” (a must-see!).

The doc is an all-access look into the life of this feisty, no-holds barred superstar who was not afraid to tell anyone anything at any time. The film follows the 89-year-old Stritch as she dominates the stage in her one woman cabaret act, tortures Alec Baldwin on “30 Rock,” offers her blunt take on aging, and takes us into her struggles with alcohol and diabetes.

Following the screening, film fest founder Michael Moore helped her up the stairs to the stage at the State Theatre, where the audience leaped to their feet and cheered loudly. In short, it was amazing to see her, and everyone there knew they were in the presence of someone who is like no other person on the planet or, for that matter, the universe, should other beings out there be peering into our lives.

The Q&A included moderator Michael Moore, Elaine Stritch, director Chiemi Karasawa, Elaine’s musical director Rob Bowman, and a cherished friend whom she met in Alcoholics Anonymous. Also in the audience were several members of her family from Detroit, where Elaine lived her remaining years in retirement.

Here are a few highlights from the Q&A, in which she called Michael Moore “adorable” and said of the film festival, “I haven’t had this much fun in a long time.”

On why she would allow cameras to follow her around for the documentary: “Why not? Nobody else was following me around.”

On moving from New York to Michigan: “I’ll always miss New York, but I kind of like going in and out, and having some place I can call home. I love being here in Michigan, and I think something very good is going to happen [with Detroit’s economic situation]. They’re fighters. Detroiters are fighters.”

On whether she was on Twitter: “I don’t even know what that is. And it’s a lousy title.”

On whether she’d ever do another one-woman show: “I’d hate to think what would ever make me do it again. It’s hard work.”

On how she kept her voice healthy: “I just keep talking. I guess I’ve got good pipes.”

On her favorite entertainer: [First she pointed at Michael Moore, sitting next to her, who quipped, ” That will not get you another hand when you get out of the chair,” to which she replied, “You have no idea what that remark is going to get you.”] “Chris Rock. He’s very funny and a hell of an actor.”

On the death of James Gandolfini, with whom she’d been friends: “I don’t like to talk about it.”