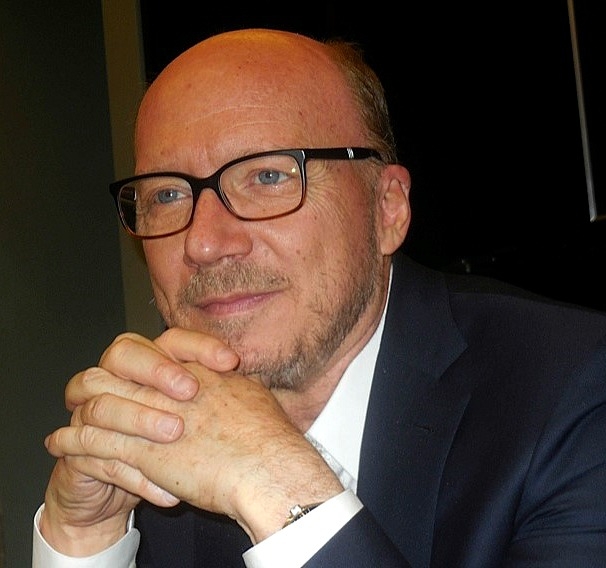 In Paul Haggis’s new film “Third Person,” Liam Neeson plays Michael, a prize-winning writer who holes up in a luxury hotel in SoHo and later Paris where he hopes his sexual trysts and mind games with his much younger, journalist girlfriend, Anna (Olivia Wilde), will rev up his creative juices enough so he can finish his stalled novel. Meanwhile he checks in and consults via phone with his estranged wife (Kim Basinger) for emotional support. One of the pleasures of the romantic drama is the opportunity to see Neeson dig into a role that doesn’t require him to pummel or shoot anyone. It’s a reminder that before Neeson did the “Taken” films, he starred in “Schindler’s List.”

The story of a tortured writer and his wacky lover is only one of three vignettes that intercut but only intersect at the very end of the movie, reminiscent of “Crash,” the film for which Haggis won the Academy Award in 2004. “Third Person” tells three stories that focus on love, passion and betrayal; unrelated couples whose actions affect estranged spouses, lovers and children who suffer the fall out.

The other threads feature Mila Kunis, who plays Julia, a former actress fallen on hard times, who now works as a hotel maid, and James Franco as Rick, her successful artist ex-husband; they are locked in a bitter battle over her visitation rights to their son. (Maria Bello plays Julia’s lawyer and turns up also in the final story.) Loan Chabanol plays Rick’s girlfriend, a bewildered witness to the harm her boyfriend and his ex-wife are wrecking on their son.

The final story features Adrien Brody as a shady businessman in Rome who meets up with the beautiful and mysterious Monika (Moran Atias), a Roma woman with whom he becomes entranced. She may or may not be trying to fleece him for money she claims she needs to pay off the kidnappers of her young daughter.

Haggis, who moved to New York from Los Angeles five years ago, promoted his new film recently at the midtown Manhattan office of Sony Pictures. (Chabanol and Atias also attended the press event.). Below the slideshow are edited highlights from the roundtable with the affable and brilliant director.

How much of you is in the Liam Neeson character? Talk about your writing process and if it’s anything like Neeson’s character, Michael, who draws on his personal relationships as material for his book.

I start it by asking questions. I start obviously with relationships I’ve had, things that failed, things that have worked. Mostly failed, and I ask questions about those things and then put them into stories in which people will not recognize themselves, mostly, because I wanted to explore different aspects of how I’d failed or how I could possibly have succeeded if I’d done something better. If I’d done something less, and so that’s what I really did, so it’s easy to say look at the Liam Neeson character and think it’s me, and he does explore a lot of things that I was exploring, especially about how damn selfish we are to be writers and how other people often pay the price for that selfishness. And, of course and thank God, I never had gone through a tragedy like he goes through or other characters go through, but I can imagine myself there, because often, it’s children that pay the price for our selfishness.

There seems to be a God aspect to this kind of writing.

I like to write from the point of view of characters that I completely disagree with because it challenges me and gets me to look at my own justifications, rationalizations, bullshit. I write about what haunts me, and playing God, both as a writer and especially as a person, is something that haunts me.

Is a legitimate take on the film to assume all the other characters in the movie besides Michael may be only characters inhabiting his book?

This time I let them take me to places and they would often take me to blind alleys or off a cliff or a bridge of no return, just wander off into the desert and get lost, but occasionally they would take me to things I just didn’t understand. There were things that were haunting me. I couldn’t figure it out. They’d take me to things I didn’t really want to look at. That’s exactly what’s happened to Liam’s character, who’s just going through all these relationships and dramas. It’s easier to live that kind of drama than it is with responsibility for what you’ve done.

Interpret what you meant by this third person?

There’s always a third person in a relationship, but you often don’t know who that person is. You think it’s your mother-in-law when it’s actually someone from the past that’s keeping you from moving on or keeping you from connecting with someone.

I don’t keep a journal, but I love the idea that Liam’s character, Michael, distances himself so much from his own feelings that he actually journals in the third person. Then Anna picks that up and they talk in the third person. They flirt, they have these fabulous times, and they also talk to each other incredibly cruelly. They’re characters in their own lives as they’re working through them, and I thought that was a fascinating psychological aspect, because I did that at one point.

It’s an intense film. Talk about some of the lighter moments on set.

Once, poor Liam, I put Liam into the shower and Anna is on his bed naked reading his journal. Okay. This is a set we built, so I wanted there to be steam coming out of that shower. I put him in there and then the DP starts talking to me and the water was running. Somebody was saying something and Olivia’s asking a question and we’re rolling and then finally Liam screams, ‘I’m goddamn scalding in here.’ We were burning the son of a bitch, ‘oh sorry, action.’ He was waiting very patiently there for his action cue for way too long, so he came out quite red, not from anger but because I almost fried the poor man.

After all the action pictures he’s done, did you wonder if he could still do a serious drama?

Not for a second. I chased him from the moment I finished writing the script. Look at the great movies he’s done! But he hasn’t had a chance to play a romantic lead in a while, he told me something like 20 years.

There’s an extended scene where Olivia Wilde runs naked through the hotel hallway. Was she onboard for that from the beginning?

Completely, and that was the great thing about working with Olivia. I told her from the beginning, Olivia, you run buck naked in this movie. You have to know that from the beginning. And she said, ‘Look I can do that for you.’ And she knew what the scene was, too. She knew what that scene was, and she made it so comfortable for us. It’s not a big deal. Of course I closed the set, so it was only me, the DP, and the camera man. That was a set, thank god, that we built.

She was not really running down a set of stairs. These stairs go to nothing. You go to a pit and then you go down to the next one. She did an interview where she said in between takes, she was eating pizza completely buck naked.

I didn’t want it to be sleazy in any way. And it’s just so much fun to watch her. She’s so vulnerable in that moment, and as a character who hasn’t been vulnerable, who’s been quite cruel, you want to see that other side of her.